Tottenham Hotspur were one of three teams to have won every Premier League match they had played at home this season. That was until Newcastle United headed for north London on Sunday afternoon. Arsenal and Manchester City are now the only two teams with maximum points at home.

Callum Wilson netted Newcastle’s opener with a clever chip and after Sean Longstaff’s interception, Miguel Almiron put the Toon two to the good. Despite Harry Kane pulling one back for the hosts, it proved nothing more than a consolation. Eddie Howe’s side held on for the win and have landed a place in the top four.

Spurs had won their first five league games at home for the first time in 35 years, so coming back from the capital with three points was no mean feat. There were numerous contenders for the Magpies’ Man of the Match but the man of the moment is undoubtedly Miguel Almiron.

It’s been a long time coming, but the Paraguayan playmaker is finally coming into his own.

Miguel Almiron is the Main Man for the Magpies

October’s proved a fantastic month for the 28-year-old. He bagged a brace at Craven Cottage against Fulham, the first goal being a venomous volley right into the top corner. He tapped home the fourth Newcastle goal that day to seal the deal in west London.

And the following Saturday, he made another west London outfit pay, bagging one of five at St James’ Park against Brentford. It might have been considered a gift, but it sums up his game at present. As well as looking to provide a threat in the wide area, his positional sense has come on leaps and bounds in order to sniff out opportunities.

Sunday’s victory has Newcastle sat just two points behind Antonio Conte’s Tottenham in third. The hosts did their very best to gift their opponents goals, with the visitors gratefully accepting both inside a ten-minute period at the weekend. 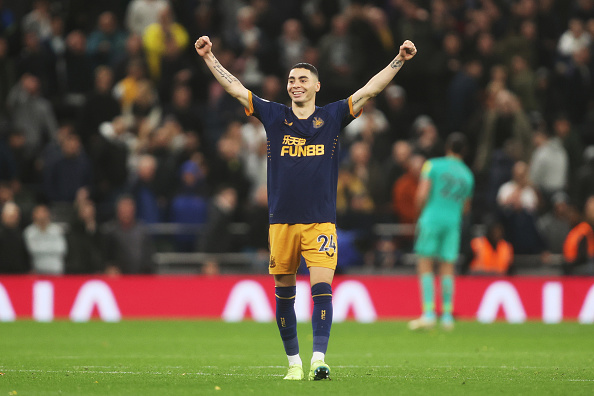 Given the rich vein of form that ‘Miggy’ finds himself in, perhaps making five changes from their defeat to Manchester United was silly from Spurs. Clement Lenglet and Ryan Sessegnon replaced Ben Davies and Ivan Perisic on the left-hand side.

And, after Wilson’s opener, Miguel Almiron bagged his fifth goal in as many starts for Newcastle United. A wonderful winner against Everton in midweek was succeeded by a stunning solo effort at the Tottenham Hotspur Stadium.

After signing on Tyneside back in January 2019, it was a stuttering start for the £20 million man. Perhaps it was the fact that he was immediately expected to justify a club record fee. Or it was overlooked that he hadn’t had a pre-season with his new teammates after signing from Atlanta United, who had just concluded their MLS campaign.

The 2019/20 season, Almiron’s first full one as a United player, saw him net four Premier League goals and eight for the Toon in all competitions. Four was also his league tally in the 2020/21 season and his winner against Crystal Palace in April was his sole strike last season.

Prime Time for the Paraguayan

Players in the final third are judged upon their numbers. Goals had dried up for United’s number 24 in a stop-start campaign. It appeared as though he could’ve been a contender to leave. A whole host of starts could’ve transferred to Tyneside in a potentially new-look Newcastle.

However, Eddie Howe has kept him around when it would’ve been easy to fork out for a new winger or attacking midfielder. Almiron is continuing to justify his selection. The Paraguayan is a prime example of a player that the manager has developed, as opposed to getting the chequebook at the ready.

Miguel Almiron has scored more league goals in October than Jack Grealish has managed for Manchester City. Perhaps that will silence the £100 million man, as the Toon’s wing wizard continues to keep improving.