Twenty-one-year-old French centre-back William Saliba found it easy to make a name for himself in France and has long been regarded as one of their most promising young stars.

However, the same could not be said in England, with the defender struggling for game time under Arsenal boss Mikel Arteta. Many fans wondered whether Saliba had what it took to make it in English football.

It is safe to say that so far in the 2022/23 season, Saliba has proven those doubters wrong.

What a goal from William Saliba 🚀

Arsenal fans have been singing his name for the majority of the game and now Saliba has responded with a brilliant goal into the top corner.

William Saliba first announced himself in senior French Football in the 2018/19 campaign, in which he made a total of 16 Ligue 1 appearances for Saint-Etienne

He was one of the most impressive players in an already spectacular Saint-Etienne side that achieved a fourth-placed finish that season. According to SofaScore, the Young Frenchman registered an astonishing 1.8 interceptions per game as well as two tackles per game in the domestic league that campaign.

However, it was his distribution that truly caught the eye of top teams all over Europe. The defender maintained an overall passing accuracy of 86 per cent in the league that season and was excellent at progressing the ball up the pitch.

It was this calmness and competence on the ball as much as anything else that prompted Arsenal to sign the defender at the start of the 2019/20 season for a whopping fee of approximately £27 million.

Saliba Wins the Ligue 1 Young Player of the Year Award

Following successful loan spells at both Saint-Etienne and OGC Nice, Saliba was once again loaned back to France for the 2021/22 season, this time for French giants Marseille.

This was the best season of his career and he received huge amounts of praise from everyone in France. Rival fans, coaches and pundits alike – every French football fan was in awe of William Saliba.

Perhaps none more so than his manager at the time Jorge Sampaoli, who described the defender as a “future great of French football” – steep praise from a manager who is notoriously hard to please.

His excellent displays, which helped guide Marseille to a second-place finish in the league, saw him win the Ligue 1 Young Player of the Year award. 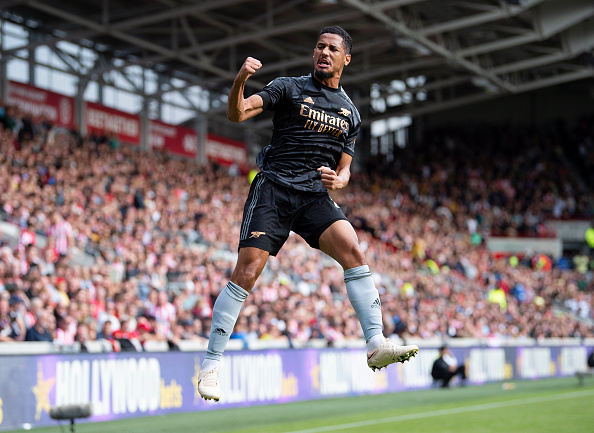 Many Arsenal fans were growing increasingly impatient with Mikel Arteta’s unwillingness to give Saliba playing time in an Arsenal shirt but were finally granted their wish when Saliba started in Arsenal’s 4-0 thumping of Chelsea in Arsenal’s 2022/23 pre-season tour and has been at the heart of the Gunners’ defence ever since.

For such a young player, he has an incredible amount of composure on the ball, even when being pressed, and has added some much-needed pace to Arsenal’s backline. His own goal against Fulham was a mistake that could have affected the defender mentally but, with the aid of the fans who sang his name moments after the mishap, Saliba shook it off and returned to his brilliant best almost immediately.

Speaking before their clash with Arsenal, Leicester boss Brendan Rodgers said “Saliba is a talented player, he’s gone away and got really good experience and you see him, he’s quick, he can dominate. He’s a fantastic addition and gives them presence at the back.”

Although it has taken some time, Saliba has proven himself as one of the best defenders in the Premier League and Mikel Arteta’s decision to give the youngster playing time via three successive loan spells seems to have paid off, and at just 21 years old, there is still plenty of time for Saliba to improve even further.

Sunderland Weekly Round-Up: Black Cats Have Nothing to Fear in the Championship
Huddersfield Town Next Manager Odds as Terriers Search For New Boss