Benfica had a disappointing year, failing to win any silverware and finishing a distant third behind Champions Porto and city rivals Sporting. To make the campaign worse, the Darwin Nunez transfer saga has ended with the striker signing for Liverpool until June 2028 for an initial fee of €75m, rising to €100m with add-ons.

Benfica Fans Have Their Say on Darwin Nunez Transfer

The news of Nunez leaving for the Premier League has been met with a mixed reaction from Benfica fans, with many seemingly pleased with the fee the club will receive for a player that has effectively had only one impressive season.

The reaction on Twitter was mixed, with one Benfica season ticket holder predicting a tough time for Nunez in the Premier League. Many also thanked him for his time at the Estádio da Luz but are equally delighted with the fee received for their former star.

Read also: Deal “Done and Sealed” for Liverpool to Sign 18-Year Old Who is “One of Europe’s Best” – Fabrizio Romano

Much of the recent conversations in Lisbon have been about the transfer of Nunez to Liverpool. Speaking to one Benfica fan, they were full of praise for the Uruguayan and described his performances during the 2021/22 season as sensational.

However, they also mentioned how Nunez performed at an average level during the 2020/21 season after arriving from Almeria for a club-record €24 million. During his first season at Benfica, he scored 13 goals in 43 games.

Speaking to a Benfica season ticket holder, they were critical of Nunez and his apparent “terrible touch and hold up play”. I countered this by referring to the Uruguayan’s sensational goals return last season of 34 goals in 41 appearances.

The season ticket holder went on to refer to Nunez as a “One-season wonder” and predicted he would struggle in the Premier League. 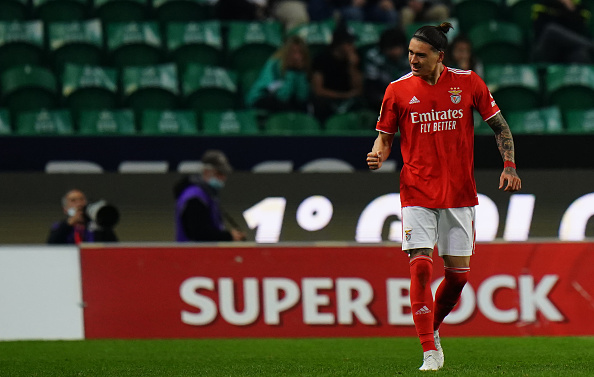 What Does Nunez Bring to Liverpool?

Nunez is riding the crest of a wave following his sensational season at Benfica, scoring 34 goals. Liverpool fans are convinced he will be a success.

He is at his best when running with the ball at his feet, driving at the opposition defence. The Uruguayan hitman only has one thing on his mind when he’s in the box, and that’s to score.

One criticism is that he’s known to squander guilt edge chances, but his ability to shoot early from anywhere has seen him score more than his fair share of goals.

You will often see Nunez drift out to the left to pick up the ball – he loves to do this and cut inside on his right foot before firing a shot towards the opposition goal. Doing this has been a tactic that has worked for him incredibly well all season.

His hold-up play, passing, and creativity are his main areas that need improvement. On many occasions, this campaign, Nunez’s work rate has undoubtedly seen him win the ball back in vital areas, which has led to him scoring.

Jurgen Klopp will love the intensity with that Nunez plays football. However, he will need to sharpen up in front of goal. He has joined Liverpool for an initial €75 million and the Kop faithful will be expecting a quick return from the former Benfica striker.

The pressure is on Nunez with this sizeable fee hanging over his head. His hold-up play and creativity will need to improve if he is going to be more Luis Suarez than Andy Carroll, but at 22 years old, there’s sure to be plenty more improvement to come from Liverpool’s newest recruit.