Infogol’s Jake Osgathorpe uses expected goals (xG) to analyse the Premier League campaign so far, evaluating the sides at the top of the league, the early battle for relegation, and what we can expect during the rest of the season.

Key Trends in the Premier League

Have Manchester City Taken a Backwards Step in Attack?

Manchester City have struggled so far to produce the free-flowing attacking football that has made them such a threat over the past four years.

After seven games last season City had scored 27 goals. This term only six Premier League teams have scored fewer than their tally of ten. It’s hardly the kind of form that they would have hoped for as they look to reclaim the league title.

It isn’t just a lack of clinical finishing though. Infogol’s data shows they aren’t creating chances at the same rate either. Their expected goals return this season is just 10.7 xGF and are averaging only 1.53 xGF per game. This is their worst attacking process since Guardiola took over. To put that into perspective, in his first campaign, they averaged 2.14 xGF per game and went from strength to strength over the following three seasons. They really seem to have taken a backward step. 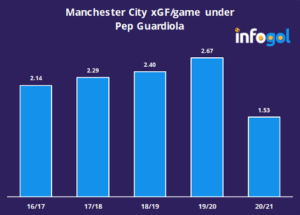 Manchester City xGF per game by season under Pep Guardiola

After finishing 18 points adrift of Liverpool but scoring 102 goals, Guardiola highlighted his defence as the area to improve. In an attempt to tighten up defensively, it may have had a negative impact on their attacking threat.

The City players also had a shorter pre-season than some of their title rivals due to Champions League fixtures at the end of last season. Neighbours Manchester United also had an extended 2019/20 campaign due to European football commitments and have yet to find their rhythm either.

When there’s a shortage of goals you have to look at the strikers and, in fairness to City, they have been without Sergio Aguero and Gabriel Jesus for most of this season’s games. This has also resulted in a change in system and tactics. Whilst Jesus scored in his last appearance against Liverpool, Aguero should be available to face Tottenham Hotspur, so if City can start creating chances they should be able to really get their season going.

Brighton Should Trust the Process

Brighton & Hove Albion have started the season in a similar fashion to the way they finished the last one and have struggled for wins.

With just one victory in eight matches, they find themselves three points above the relegation zone and unless they find some form many are tipping them as relegation candidates.

However, the xG data suggests that they should have picked up more points and have won the xG battle in five of their eight league games. 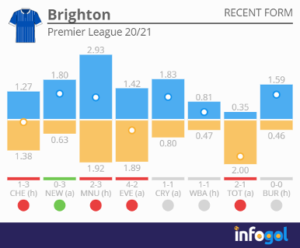 Based on expected points (xPoints) they should actually be in fifth place. They are sixth in terms of expected goal difference (+2.4 xGD) and boast an underlying process of a team we would expect to see in the top half (1.50 xGF, 1.20 xGA per game).

If the club can keep faith in Graham Potter and they continue to produce this level of performance, they should end up in mid table rather than finding themselves in a relegation scrap.

Don’t Get Carried Away With Tottenham’s Improvement

Jose Mourinho’s side are second in the league and fans have been discussing a possible title challenge.

Tottenham Hotspur’s form in the second half of last season didn’t suggest they could challenge Liverpool with an underlying process of 1.41 xGF and 1.54 xGA per game in 2019/20 after Mourinho took over, but they are rightfully second according to this seasons xG data. 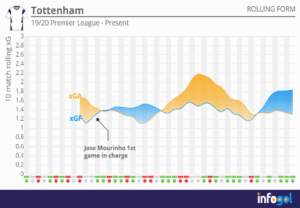 Mourinho is taking them in the right direction and they are now averaging 2.15 xGF and 1.23 xGA per game.

However, it could still be too early to call them serious contenders. Tottenham have had the easiest opening run of fixtures in the Premier League. 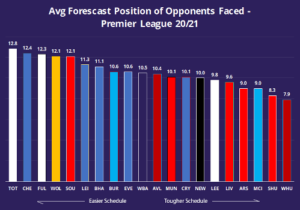 Fans will be happy with the improvements, but those underlying numbers could have been inflated by the quality of the opponents they’ve faced. We’ll have a better idea of the level Spurs are really at after the next six games.

The average forecast position of their next six opponents is 5.5.

They play Manchester City (h), Chelsea (a), Arsenal (h), Crystal Palace (a) and Liverpool (a) before hosting Leicester City. They also have Europa League games in between the first four of those fixtures.

Infogol calculate that they should pick up 7.4 xPoints in those next six games, whereas Liverpool are predicted to collect 12.5 xPoints, Manchester City 12.9, Chelsea 11.2, Manchester United 11.3 and Arsenal 8.7. The league table could look a lot different for Spurs after those games.

There’s yet to be a standout team in the title race but, at the other end of the table, the relegation battle is already starting to shape up.

Out of the bottom four clubs, only Fulham have managed a win so far this season, although they have also lost six out of eight games. Sheffield United, Burnley and West Brom currently occupy the relegation places and will need to find some goalscoring form if they are to climb up the table as they are also the three worst attacking teams in the league.

Only West Ham had a tougher opening eight games than Sheffield United so you can see why the bookies are backing them to stay up.

Burnley have played a game fewer than the other teams around them and if they win that they’ll climb out of the bottom three. Sean Dyche’s side continue to be resolute defensively (1.2 xGA per game) but are really struggling in attack (0.80 xGF per game) and they sit 19th in the Infogol xG table.

Fulham have performed the best according to xPoints out of the current bottom four, sitting fifth from bottom in the xG table, but Scott Parker’s side have had the third easiest run of fixtures in the league, while their next six rank as the second-toughest schedule.

West Bromwich Albion have been the worst team in the Premier League this season and by a long way. They have a laughable attacking process (0.60 xGF per game) and possess the worst defensive process in the league (1.98 xGA per game). Only once have Slaven Bilic’s side created more than 1.0 xGF in a single game. They look to be in major trouble. 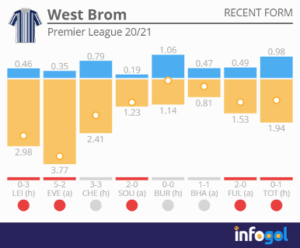 These four sides occupy the bottom four positions in our forecast table – it is going to be a long season for them all.

Leicester and Southampton Set to Slow Down

Whilst the big six have all dropped unexpected points so far, Leicester and Southampton have both looked clinical and are gate crashing two of the Champions League places, with the Foxes sitting top of the league and Southampton in fourth.

Brendan Rodgers’ side started well last season and were touted as surprise title challengers up until Christmas.

On the face of it their process is good (1.81 xGF, 1.24 xGA per game), but they have been awarded eight penalties so far which massively boosts their xGF. 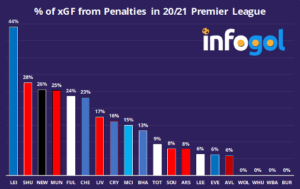 % of xGF from penalties in 20/21 Premier League

That means 44% of Leicester’s xGF total this season has come from penalties, a colossal amount compared to the rest of the league. Sheffield United sit second with 28%.

They are averaging just 1.01 non-pen xGF per game and they won’t be awarded penalties at the same rate over the course of the full season.

Southampton have managed to come out on top in some tight matches they have accumulated sixteen points.

Ralph Hasenhüttl’s side sit eighth based on xPoints, with their xGD only +0.4 which places them tenth in the Premier League. They are flattered to be fourth, with the process perfectly demonstrating how their matches tend to be tight affairs (1.25 xGF, 1.18 xGA per game).

Expect both Leicester and Southampton to slip down the table and out of the top four unless they improve their underlying process.