Game Changer Wrestling is Detroit-bound as the independent wrestling powerhouse prepares for GCW D.O.A. – Dead on Arrival. GCW is set to have a busy weekend to come, including its Rock-N-Roll Forever event the following Sunday, featuring the legendary Rock ‘n’ Roll Express. When it comes to this Thursday’s show, however, there won’t be any shortage of action. Such names set for action include Alex Shelley and the reigning GCW Ultraviolent Champion, Alex Colon. Furthermore, for those that are unable to attend the Knights of Columbus venue in Detroit, Michigan, the action will air live on FITE. Without any further delay, let’s take a deeper dive. 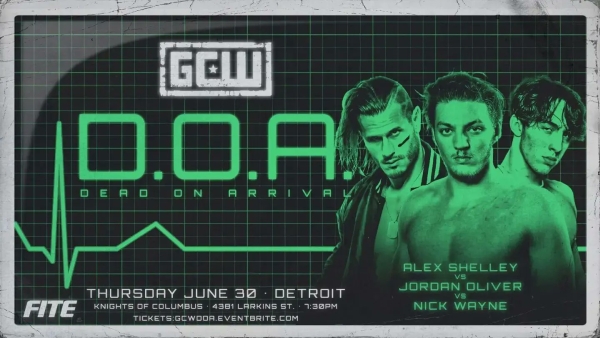 Alex Shelley Steps Back Into GCW

One of the major notes heading into GCW D.O.A. is the Game Changer Wrestling return of Alex Shelley. The current Prestige Wrestling Champion hasn’t stepped foot into a GCW ring since this past April, when he bested Nick Wayne at the company’s The Old Me event. This isn’t to say that “The Motor City Machine Gun” has been inactive, however. In fact, he’s been incredibly prevalent throughout the independent wrestling scene, wrestling matches for not only Prestige but Unsanctioned Pro and REVOLVER, among other organizations. Furthermore, he’s routinely appeared for IMPACT Wrestling both as a singles competitor and alongside his MCMG partner, Chris Sabin. At D.O.A., Shelley returns to a sizable challenge.

This Thursday, Shelley will compete in a three-way match that features not only Wayne but Jordan Oliver as well. These are two of the more promising young stars in GCW. The multigenerational star in Wayne, based on the All Elite Wrestling contract in his possession he can’t cash in on until he becomes of age, may very well become AEW-bound before long. Meanwhile, Oliver’s work extends beyond GCW, as he found notoriety and success in companies including Vanguard Championship Wrestling, Combat Zone Wrestling, and Major League Wrestling. Wayne and Oliver continue to chomp at the bit, looking to make an impression by any means necessary. Whether it’s a pinfall or submission victory over each other or against the veteran in Shelley, this is a three-way dance to keep an eye on. 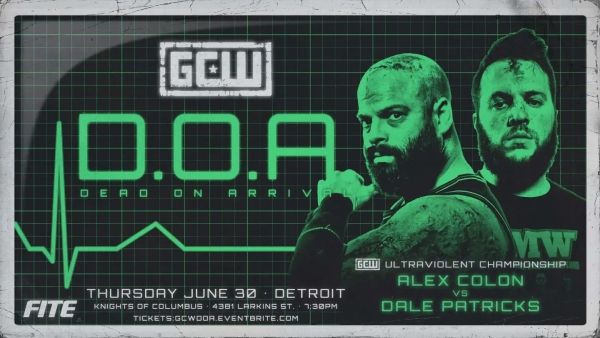 GCW D.O.A. is set to be capped off by a major title defense. Alex Colon, the 3x GCW Ultraviolent Champion, will defend his title against the returning Dale Patricks. Colon captured his history-making third GCW Ultraviolent title earlier this month at the company’s C.O.S. – Cage of Survival event. In the main event, he took hated rival John Wayne Murdoch to the limit, ultimately seizing the aforementioned title. There are quite a few wrestlers that embody GCW’s deathmatch scene, Colon being one such name. From his status as champion to his victories across multiple grueling tournaments, anyone looking to test their mettle must step up to him. This Thursday, Colon puts the gold on the line as he takes on a fellow veteran of the deathmatch wrestling scene.

Trained by Billy Roc, Dale Patricks is one of the most seasoned deathmatch wrestlers in the game today. He boasts over a decade of experience, his work taking him to CZW, ICW No Holds Barred, IWA Mid-South, and elsewhere. Known as “Pro Wrestling’s Jackass,” Patricks’s grueling in-ring style afforded him success over the years. Currently, he’s the heavyweight titleholder of Asylum Wrestling Revolution, having captured the gold this past November. At D.O.A., Patricks makes his GCW return. His last appearance for the promotion dates back to 2019, when he was bested by Nick Gage at the company’s Backyard Wrestling tribute event. Can Patricks make his return that much bigger with a title victory? Tune into this Thursday’s show to find out.

Stay tuned to the Last Word on Pro Wrestling for more on this and other stories from around the world of wrestling, as they develop. You can always count on LWOPW to be on top of the major news in the wrestling world, as well as to provide you with analysis, previews, videos, interviews, and editorials on the wrestling world. GCW D.O.A. is set to air Thursday at 7:30 PM EDT on FITE. Tickets are also available via Eventbrite.