New Japan Pro Wrestling (NJPW) is in the midst of building toward Forbidden Door alongside All Elite Wrestling (AEW). However, NJPW still has their second biggest show of the year before looking that far ahead as Dominion airs Sunday from Osaka. This will be the first show where the influx of talent from the United States rejoins the company in Japan with no bigger name than Bullet Club leader Jay White, who will challenge for the IWGP World Heavyweight Championship. Here’s a look at the NJPW Dominion lineup.

Juice Robinson vs. SANADA vs. Will Ospreay: Who Deserves To Be IWGP United States Champion?

Juice Robinson won the IWGP United States Championship at Capital Collision, defeating Will Ospreay, Jon Moxley, and Hiroshi Tanahashi. In this third reign as champion, Robinson has created this “Rock Hard” persona as a member of Bullet Club and it’s treating him well. That being said, getting through back-to-back multi-man title matches with the gold is a tall task seeing that one of the competitors is a former IWGP United States Champion in his own right and the other is a former IWGP World Heavyweight Champion. There’s a lot of work to be done for Robinson to retain, but he can certainly do it.

Opposing him as noted before includes SANADA, who never got to defend the championship due to an orbital fracture at the hands of Ospreay in the New Japan Cup. It was a difficult situation for SANADA with the title win over Tanahashi being one that was a long-time coming. He’s going to do all he can to recapture the IWGP United States Championship but it won’t be easy. And then there’s Ospreay. It’s been detailed how the leader of The United Empire has struggled to get anything going with a lot of his shortcomings being suspect due to mostly referee errors. “The Commonwealth Kingpin” is a win away from shifting that bad luck and this would certainly be the match to do it. Ospreay is overdue for a big win.

It’s anyone’s match to win and whoever does walk away with the victory hopefully can hold onto the championship for a healthy run.

With the stunning turn of events, this match now comes down to the former IWGP United States Champion in SANADA (who never got to defend the title) and the former IWGP World Heavyweight Champion, Ospreay. The last time these two faced one another, Ospreay defeated SANADA in the New Japan Cup. As stated prior, that’s where the injury to SANADA occurred. Both men have a claim to this championship and whoever does win it will do all they can to make the championship theirs for the foreseeable future.

“The Rainmaker” vs. “Switchblade” for the IWGP World Heavyweight Championship 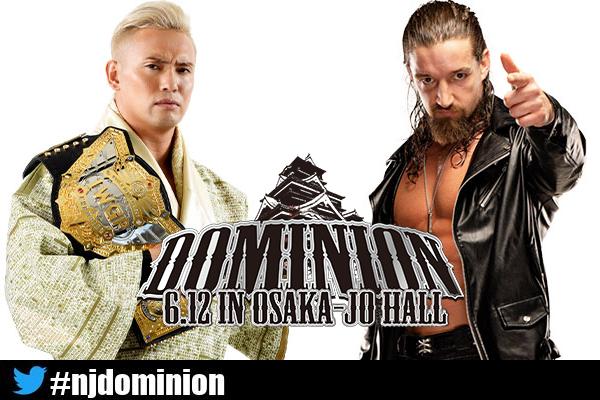 The main event of Dominion has been a long time coming. Kazuchika Okada has been dominant since last year’s G1 Climax, losing only two singles matches against Tama Tonga and Tetsuya Naito. His dominance led him to the IWGP World Heavyweight Championship at Wrestle Kingdom and should be leading him to Forbidden Door at the end of the month. But somehow Okada will enter his title defense on Sunday night as the underdog. That’s because “Switchblade” Jay White is finally back in NJPW and has his sights on winning the IWGP World Heavyweight Championship for the first time in his career. White, otherwise, has won everything when it comes to singles championships in NJPW. This is the one he needs to make even more history.

And why should the Bullet Club leader doubt himself? His overall record against Okada is a stunning 3-1, but the one loss was in the main event of the G1 Supercard, where White’s first and only reign with the IWGP Heavyweight Championship came to a premature end. There’s no question this loss has remained in the brain of White but if he can prove that this really is still his era, then all can be forgotten.

“The Rainmaker” vs. “Switchblade.” Okada vs. White. This match is as 50-50 as it gets when it comes to the reign of Okada so far and it makes the match all the more exciting. The match is a must-win for both men but even more so for White. If he loses then what’s next? His grand return to Japan would be all for nothing.

This is what NJPW is all about at its best and it should be a special main event.