Welcome to the third installment of This Week In Independent Wrestling. As we get further into the summer and the weather gets warmer here, it feels like the wrestling heats up as well. Some big matches are coming up this weekend with some big shows and, if you’re in the area, you should attend at least one of them if you can!

Who on the Open roster do YOU want to see challenge Caster for his briefcase of cash tomorrow night?

Wrestling Open has announced a tag team tournament called the “Saturn & Kronus Eliminator Cup”. The first match will happen this Thursday at the White Eagle as Brick City Boyz take on Shook Crew. Relative newcomer 50 Cal will take on relative veteran Dan Barry as well. Max Caster is offering up $10,000 to anyone who can spend ten minutes in the ring with him and many of the other normal roster members will also likely be in that type of action that only Wrestling Open can provide.

Wrestling Open takes place live at the White Eagle in Worcester, MA every Thursday night and is also streamed live on IWTV. For tickets and more info please visit: http://beyondwrestlingonline.com/wrestlingopen

On Friday and Saturday nights, H2O Wrestling will run a doubleheader from the H2O Center in Williamstown, NJ. Friday night is Death Wave and it is headlined by Masha Slamovich vs Kennedi Copeland and Austin Luke vs AKIRA. Deklan Grant takes on Brandon Kirk while Jeff Cannonball goes one on one with Mitch Vallen (The Lone Rangers explode!). Mouse, Reid Walker, Drew Blood, Dyln McKay, Chuck Payne, Devantes, and more are scheduled to appear.

For tickets and information about either of these shows- which will both air live on IWTV as well- please find H2O Wrestling on social media.

THIS FRIDAY in RIDGEFIELD PARK, NJ!!

For the time ever and for ONE NIGHT ONLY, Takeover will be facing STP in singles matches!! Plus various matches will be feature for the show as well. Doors open at 6PM/Belltime at 7PM. Plus the event will be LIVE on IWTV! Subscribe NOW! pic.twitter.com/148qM0ub3H

The blood was so boiled between the two factions of Takeover and STP that the only way for this to be possibly solved was for Invictus Pro Wrestling to give them their own show. While other matches will be on the card, the two factions will divide and conquer in three different matches. J. Boujii– who has perhaps had the best war of words going on in all of this- looks to take on Rev. Ron Hunt of Shane Taylor Promotions one on one in a Bodega Street Fight. The Faceless Ones take on Moses & O’Shay Edwards and, in perhaps one of the biggest matches of the year, PJ Savage (who is destined for greatness) takes on Shane Taylor himself.

Little Mean Kathleen will take on Riley Shepard to crown a #1 Contender to the Invictus Women’s Championship, Ken Broadway goes one on one with Big Game Leroy, and “Mucho” Chris Moljo defends the Invictus Social Media Championship against CPA. Sean Maluta vs Steve Off and so much more just make this the show to see this weekend as it shines bright from the historic Knights of Columbus in Ridgefield Park, NJ, and is broadcast live on IWTV.

Join us live with tickets at https://t.co/S3l0kgZ7MG, or watch live on https://t.co/c1pM4JDElA on May 21 at 7pm! pic.twitter.com/OCrFZoIF0X

While the south has been tearing it up on Uncharted Territory Season 4, ACTION Wrestling makes its debut at Newnan High School. Bobby Flaco / Brogan Finlay / David Finlay vs Liam Gray / Adrian Alanis / Damion Turner has already been announced. With Kevin Ku and IWTV Independent World Wrestling Champion AC Mack also on the poster, this stands to be a can’t miss event.

Make sure you fill out your bracket! Who will advance to the next round? The Renegade Twins have a bye and will face the winner between Force of Nature and Dangerous But Fun #CapitalCup pic.twitter.com/essg8ADe1g

If, as a independent wrestling fan, you should ever find yourself within driving distance of Delaware, then Capital Championship Wrestling is definitely a promotion worth checking out. The Capital Cup will feature singles matches with Trish Adora taking on KiLynn King as well as Kayla Sparks defending the CCW Network Championship against Brittany Blake. There will also be a seven-team tournament, which is in fact The Capital Cup, featuring The Renegade Twins (who get a bye), Dangerous But Fun, Forces Of Nature, Devlyn Macabre & Riley Shepard, Tina San Antonio & Tiara James, Scarlett & Mother Endless and The Good Sisters.

The Capital Cup will be live on Saturday, May 5th from Houston, DE and the replay will be on Title Match Network eventually. For tickets and more information please visit: https://titlematchnetwork.com/capital-championship-wrestling/

Who is coming to our Somerville, MA return show on May 21 (Sat)? Tix still available! https://t.co/TGTIwLQ3QB

Kaiju Big Battel doesn’t tend to announce their cards in advance, but when you have a group of monsters facing off against each other in rings full of buildings and mayhem, what is there to not love? KBB was a big part of independent wrestling in the Boston area in the early 2000s and returned to live events in April of this year. This should be a special that even if you go into it knowing little about it, you’re going to see something unlike anything else out there. And, perhaps, Dr. Cube might finally be stopped. 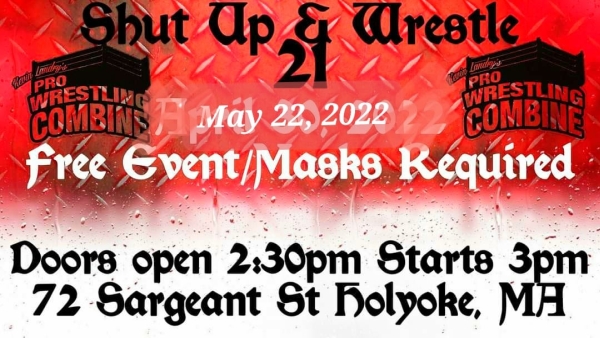 While not much of the card has been announced yet for this Shut Up & Wrestle show, their April show was canceled for unknown reasons, so some of the matches from that show might make their way here. From Buff Inc vs Jiggy Sosa and Stevie Legend to Ryan Fraust vs The Mighty Bosch, Shut Up & Wrestle has a way of booking local talent and making them look good. This is also a nice Sunday afternoon, family-friendly and free event for those in the area. Past wrestlers featured include Big Juicy, Patrick Saint, Jay Baker, 50 Cal, and others so be prepared for anything local really.

Shut Up & Wrestle takes place on Sunday, May 22nd, 2022 in Holyoke, MA from 2:30 PM until about 4:00 PM and it is free! For more information, please visit The Real Kevin Landry Pro Wrestling Combine Shut up and Wrestle on social media.