Welcome to the second week of This Week In Independent Wrestling. There is so much action out there again this weekend but it feels good to know that whoever your favorite wrestler in the New England area is, you can have a chance to see them not only in person but also possibly on television if you cannot make the show live. Let’s get into the independent wrestling action set for 5/13 – 5/14.

Following their biggest show in a year- Cold Fury– Chaotic Wrestling returns for a Friday the 13th show called Consequences, though who will be suffering them seems to be the real question here. After reclaiming the Chaotic Heavyweight Wrestling Championship from JT Dunn inside of a steel cage, Davienne called out who she felt was best suited to be her next opponent: Alec Price. Guaranteed to have Match of the Year potential, that is just one of six matches currently announced for Consequences.

All of this plus the promise of MORTAR goes down Friday the 13th in Watertown, MA. For tickets and more info please visit: https://www.chaoticwrestling.com/event-details/consequences

PAPW presents not one but two nights of their Alley Fights, back to back, and tickets are just $10 per night or $15 for both nights. Night 1 features The Hispanic Mechanics taking on The Haven in a PAPW Tag Team Championship Match, Kylon King vs Patrick Saint, Dustin Waller vs Jordyn Rowe and Jay Vara vs Buzz Bloodsaw.

On Night 2, Matt Awesome takes on Lucas Chase, Perfectly Sexy goes up against Seek & Destroy, while Anthony Gamble vs Dee Vibe and Marcel Williams vs Adrian Santos round out the card. Stevie Legend will be on hand for both nights in a show which promises some of the best young up-and-coming wrestlers on the scene. 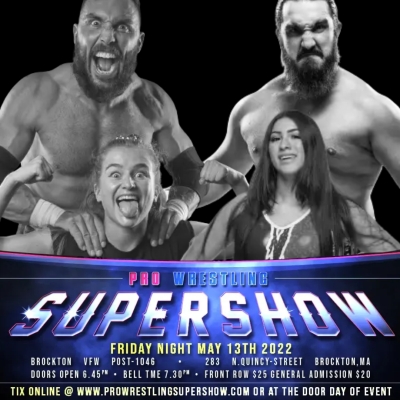 Top Rope Pro looks to have one of their biggest shows this Friday night in Brockton, MA as some big names take on some other big names in matches that will likely be seen run back for years to come. Swilly O’Brien turned on Teddy Goodz at the last TRP show, so now, O’Brien will face Brandon Webb, who hopes to avenge Goodz. Teddy Goodz himself will team with Little Mean Kathleen to take on Rip Byson and Delmi Exo. In what could be the independent wrestling match that steals this entire show, recently relocated up north, Landon Hale takes on Channing Thomas. BRG, Jora Johl, Nico Silva, Waves and Curls and so many more will be in action!

In a show where every match feels like it could be the main event, Wrestlers’ Lab brings matches such as Mr. Grim vs Big Swole, Ziggy Haim taking on Willow Nightingale for the first time ever, and Eel O’Neal vs Joseph Alexander. Erica Leigh vs Bonesaw Brooks, MV Young vs Legit Perfect Perkins, Hippy Dicky Moon vs Athrun Amada, and more round out this show, which also features Bobby Orlando, Sazzy Boatright, Delightful Dan The Goddamn Candy Man, Devantes, Pancakes, Big Game Leroy, ABBS, Max Zero, Logan Black and Big Callux.

Shows from The Lab always promise a good time, so either be at the H2O Center in person or catch it on IWTV live, Friday the 13th! For tickets and more info, visit Eventbrite.

Create A Pro presents its biggest show ever #TheGrandStage

CAP has perhaps the best lineup this weekend and as such their show is sold out but can still be streamed. John Silver and Alex Reynolds team up to take on Brian Myers and Matt Cardona. Kris Statlander is in action against Sierra and Chelsea Green. Eric James, who has been making waves on Wrestling Open, defends the CAP Championship against Bryce Donovan, who just recently returned from a nasty injury.

Pat Buck will return to CAP to take on SLADE while Aaron Rourke will defend the CAP TV Championship against VSK, Bear Bronson and Bobby Orlando. VBU defends the CAP Tag Team titles against the team of “Smart” Mark Sterling and Swoggle while Joey Avalon goes one on one with Max Caster. Karlo Vice has also vowed to call out AEW talent Hook, though that might be more of a beatdown and less of a match.

All of this plus a King Of CAP Battle Royal featuring such names as “Dr Cool” Jay Klang, CPA, Mike Anthony, Even Stevens, JGeorge, Kip Stevens, Phil Cardigan and more!

This Saturday in Riverside!!

Last month was sold out, don’t miss out! Get your tickets at https://t.co/J12QYNhJ5L pic.twitter.com/rjlUsqXVt5

For tickets and more info please visit the RWA on social media.