Dragon Gate Pro Wrestling will be present Dead or Alive 2022 in Aichi. This is a stacked event with five championship matches, a return, and a night where the landscape of Dragon Gate can change once again. Here’s a rundown of the action to look forward to on this night of gambles. 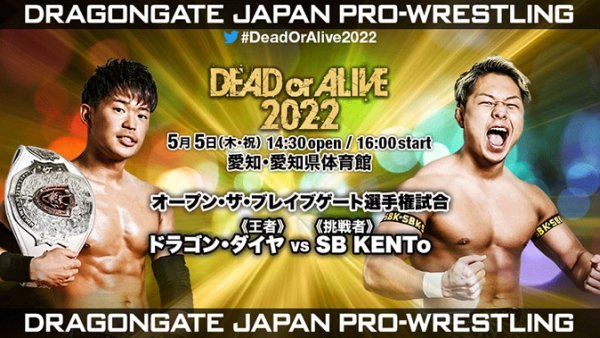 Dragon Dia has his biggest obstacle to date as a double champion, defending both of his belts on the same night. His second of the two title matches will be the Open The Brave Gate Championship match, as he defends against former champion SBKENTo. Dragon Dia returned and won the belt from SBK in an impromptu title match SBK had no time to prepare for. SBKENTo mentioned this and said he simply wanted a fair one-on-one rematch.

The match was confirmed for Dead or Alive 2022. Afterward, Dragon Dia accepted a Twin Gate defense on the same show. SBKENTo wasn’t too fond of this, mentioning that he thinks Dia is taking him too lightly. With this chip on his shoulder, and it being the second Dia defense of the night, could we see a new Open The Brave Gate Champion?

GOLD CLASS captured the Open The Twin Gate Championships back at Champion Gate in Osaka. Since their formation, they have been unstoppable and have been begging for challengers to approach them. With Dead or Alive 2022 drawing closer, it seemed nobody would step up, then three metal warriors appeared. Metal warriors was started by Naruki Doi, marking whenever someone would join a new heel unit. Eventually, it led to a singles match with one metal warrior facing Minorita. The metal warrior won with ease before they revealed themselves to be Eita, NOSAWA Rongai, and Kotaro Suzuki.

Perros Del Mal De Japon then formally challenged for the belts. NOSAWA said that last time he was in Dragon Gate, he would always remember Kota Minoura. Kotaro Suzuki set his sights on Naruki Doi because Doi once took the GHC Junior Heavyweight Tag Team Championships from Suzuki. Ishida accepted the challenge for the reason that people thought he was Eita’s lackey, and he wants to prove that wrong. Can this GOLD CLASS trio continue their dominance, or will the Pro Wrestling NOAH faction take the Triangle Gate?

Yuki Yoshioka and Dragon Dia originally weren’t scheduled to defend the Open The Twin Gate Championship. However, emotions got the best of Dia and Yoshioka backed his partner. For weeks, Shun Skywalker openly desired a Open The Twin Gate Championship match with Diamanté. However, Dragon Gate General Manager Ryo Saito mentioned it couldn’t be at Dead or Alive 2022 since Dia was defending the Brave Gate title. Skywalker then gaslit and worked up Dia enough to where the champion accepted out of anger and frustration.

This is a significant match for D’Courage, as these four changed the landscape of Dragon Gate back in December. When Dragon Dia lost his mask, Dia Inferno revealed himself to be Yuki Yoshioka, and the path for Skywalker to join Z-Brats was carved. This is the biggest test to date for D’Courage kicking off the event. Will the gamble pay off for Dragon Dia, or will Shun Skywalker take down Dia once again and gain the Twin Gate Championship? 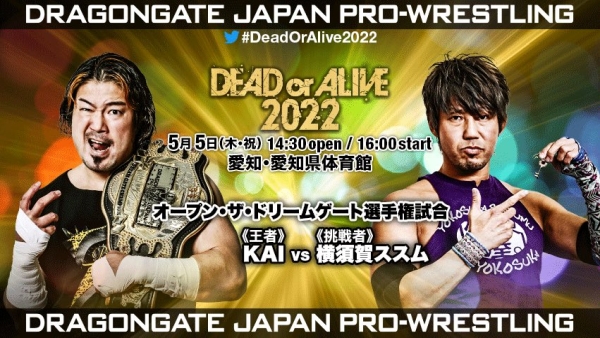 Susumu Yokosuka was asked by K-Ness when was he gonna stop being satisfied with being number two to KZY, stating that fans still wanted to see main event Susumu and Dream Gate Susumu. After Yokosuka pinned KAI in a tag team match, he decided to take those words and turn them into action. Yokosuka challenged KAI for the Open Dream Gate Championship. KAI said he would accept under a few conditions, and Yokosuka accepted. At Korakuen Hall, KAI would reveal this set of conditions.

KAI said the most important thing to Yokosuka was his friends and he wanted to take that away from him; if Yokosuka loses, he will have to leave Natural Vibes. KAI also stated that Yokosuka must also go back to using Susumu Mochizuki as his ring name. Even with pushback from Natural Vibes, Yokosuka accepted these conditions, declaring he’s not planning on losing. Much is riding on this match, as Natural Vibes has never lost a member due to disbandment or a turn. Additionally, Yokosuka hasn’t been Dream Gate Champion in years. Who leaves Dead or Alive 2022 at the top of Dragon Gate?