On Wednesday, April 27th, AEW returned to Philadelphia for the first time since last June. But more than that, their Wednesday night three-card event marked AEW’s first time back in Philadelphia since Tony Khan announced he had purchased Ring of Honor. First opening its doors in 2002, ROH got its start just a few miles down the road from where AEW was for this week’s Dynamite (as well as tapings for Dark Elevation and Rampage). For the better part of the ensuing two decades, ROH was a constant in the Philadelphia wrestling scene with many of AEW’s current stars having made names for themselves in that very city. On Wednesday night, not only did Khan celebrate the legacy of Ring of Honor and what Philadelphia has meant as a whole to the wrestling community, but he made sure that the promotion had a strong presence on the card as well.

Warning: Spoilers for AEW Dark: Elevation and Rampage below.

Wednesday’s AEW event featured three shows as Dynamite was broadcast live, bookended by a taping of Dark: Elevation (set to air Monday) and Rampage (set to air Friday). Across those three cards, Ring of Honor was much more than just an afterthought. The main event of Rampage featured Samoa Joe defending his World Television Championship against Trent Beretta with the legendary voice of ROH, Bobby Cruise, lending his talents to the ring announcing duties for the match. It marked the first time that the TV title was being defended on AEW television and was certainly a great homage to the fans who have watched ROH’s evolution from super indie to televised company to now, a partner of AEW. In his post-match remarks, Samoa Joe was complimentary and praiseworthy of the city and ROH, recognizing Philly as the home of the world’s most hardcore wrestling and promising fans who watched the company grow live, that Ring of Honor would be returning, bigger and better than ever.

But before the taping of Rampage, AEW taped Dark: Elevation, which featured two former ROH mainstays in action as Rhett Titus and Cheeseburger made their AEW debuts. 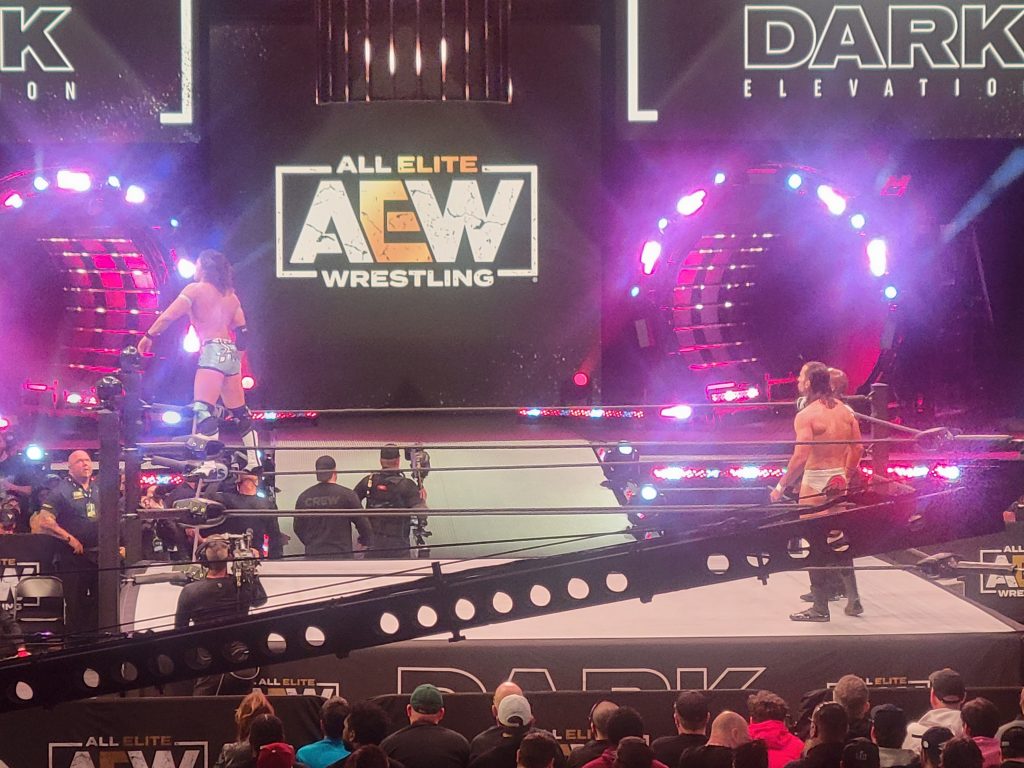 A wrestler of over 15 years, some of Rhett Titus’ earliest matches came in Ring of Honor. He first debuted for the promotion in 2006, with his first televised match occurring that same year at Supercard of Honor where he teamed with Pelle Primeau to face Adam Pearce and Samoa Joe. Continuing to wrestle mainly dark matches for his first two years, Titus became a regular in ROH in 2008, winning his first title with the promotion, the Top of the Class Trophy, in June of that year. Considered a top prospect, Titus truly gained his foothold as a tag team wrestler alongside Kenny King. The two first teamed together from 2008-10 and would return as a unit from 2010-12 and 2015-17.

Entering into 2022, Titus held the ROH World Television Championship, his fourth such title with the promotion, but his first major singles title. He lost that championship at ROH’s first show under the Khan banner, this year’s Supercard of Honor. On Wednesday, Titus made his AEW debut, losing in a match for Dark Elevation against Konosuke Takeshita, the young, rising DDT star.

For his entire career, Titus has called ROH home, wrestling the majority of his matches over the last 17 years within the promotion. Unlike many others who left Ring of Honor to explore other opportunities over the years, Titus never did. And while he may not be the most famous person or the best wrestler to ever step through those walls, he is certainly one of the more recognizable names in ROH history, due simply to his longevity and loyalty to the promotion. While there is no word of whether he will also be all-elite, it was nice to see respect given to a man whose career is synonymous with that of ROH. 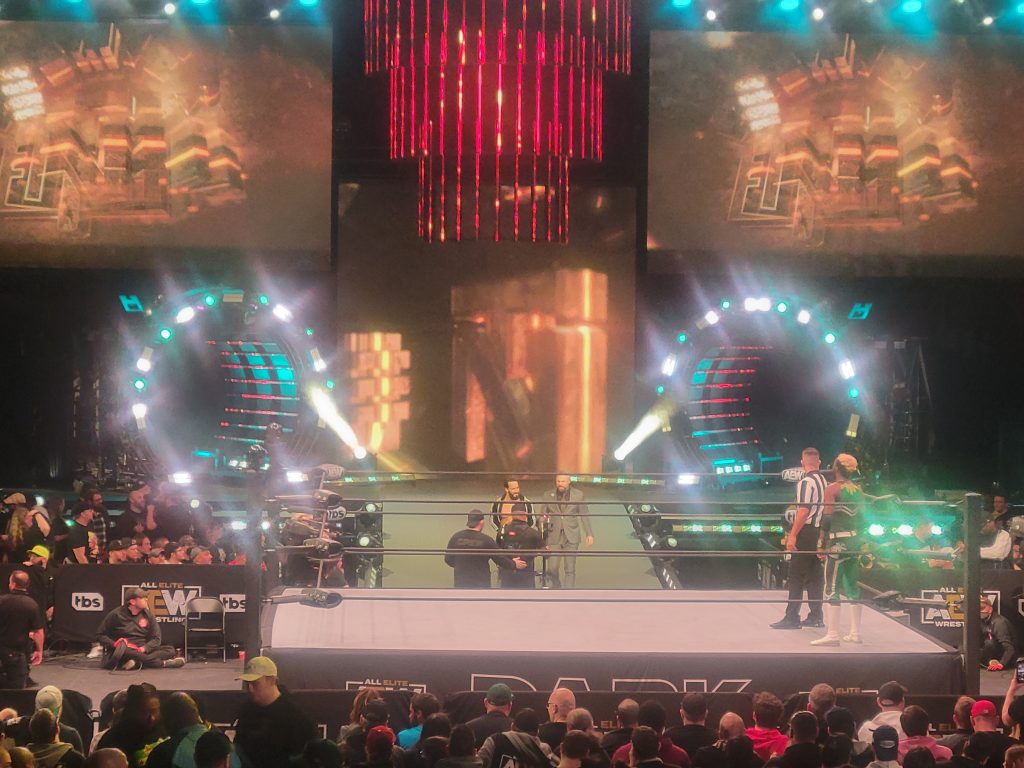 And speaking of being synonymous with Ring of Honor, fans were treated to another surprise debut as fellow ROH regular, Cheeseburger, made his AEW debut in a match against Tony Nese. Much like Titus, Cheeseburger has called ROH home for much of his career, first debuting there in 2013, his second year on the indie circuit. According to Cagematch, his first-ever ROH bout was a big one as he teamed with Roderick Strong as they attempted to take the World Tag Team Championships away from reDRagon (Kyle O’Reilly and Bobby Fish) during ROH A Night of Hoopla.

Over the course of his now 10-year career with ROH, Cheeseburger has been known for his antics as a comedic wrestler but he’s also held an important role in the company. Despite being just 28 years old, Cheeseburger has already impacted the next generation of wrestlers as he worked as an assistant trainer at the ROH Dojo before opening up his own training facility, the Worldwide Wrestling Dojo in 2018. Notable alumni trained by Cheeseburger include members of the Shinobi Shadow Squad (Eli Isom, Ryan Nova, and Markus Skyler) as well as Wheeler Yuta, who received quite the Philadelphia homecoming as he led the Blackpool Combat Club (Jon Moxley, Bryan Danielson, Yuta, and William Regal) to victory on Wednesday night.

While Cheeseburger didn’t win in his AEW debut, he was certainly over with the crowd as several times throughout his match with Nese, fans started chanting ‘We want Cheeseburger’. Much like Titus, it was nice to see AEW give a match to an ROH favorite in the city that started it all for the promotion.

Stay tuned to the Last Word on Pro Wrestling for more on this and other stories from around the world of wrestling, as they develop. You can always count on LWOPW to be on top of the major news in the wrestling world as well as to provide you with analysis, previews, videos, interviews, and editorials. You can catch AEW Dynamite Wednesday nights at 8 PM ET on TNT and AEW Dark: Elevation (Monday nights) and AEW: Dark (Tuesday nights) at 7 PM ET on YouTube. AEW Rampage airs on TNT at 10 PM EST every Friday night.