Fresh off the Season 13 premiere episode, Gatoh Move Pro Wrestling returns with ChocoPro #218. This episode boasts a three-match card, including a tag team match with two-thirds of the company’s champions and a main event featuring said company’s top women’s star taking on another star on the rise. There’s much to know before this episode goes live on the official Gatoh Move YouTube channel. If you’re planning on tuning in, whether for the first time or as an avid viewer, here is what to expect. 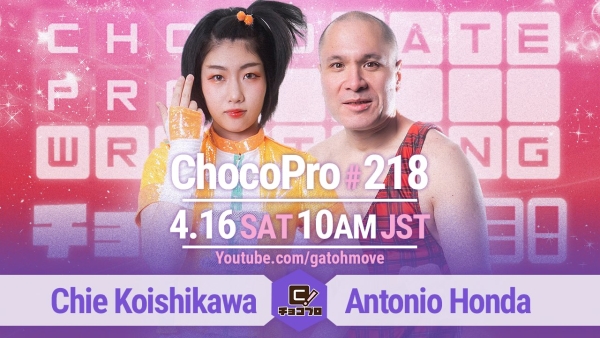 In one of the preliminary matches of ChocoPro #218, “Too Much Energy” Chie Koishikawa takes on the wily veteran himself, Antonio Honda. Koishikawa made her in-ring return on the previous episode and she intends on making Season 13 all her own. While there may still be some ring rust to consider, she isn’t one to back down from any challenge, even one as formidable as Honda. Even still, whenever Gatoh Move’s resident “Honey Hunter” steps into Ichigaya, it’s fair to expect shenanigans to follow. These can include anything from musical interludes to interference courtesy of his old ally, Gon the Fox. Those that are regular ChocoPro viewers may already know what to anticipate, but for those tuning in for the first time, expect the unexpected. This should be a promising opening match to kick off what’s certain to be an eventful show. 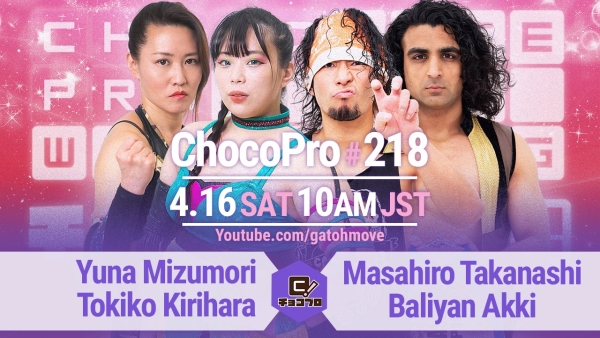 “The Pineapple Girl” Yuna Mizumori and “Otoki-san” Tokiko Kirihara team up to take on two of Gatoh Move’s titleholders. Their opposition is nothing short of formidable, as they face one-half of the Asia Dream Tag Team Champions, Masahiro Takanashi, and the Super Asia Champion, Baliyan Akki. This is an interesting match for a few reasons, chief among them the duo of champions. Takanashi and Akki are used to facing off against each other, their most notable encounter being when Best Bros lost the Asia Dream tag team titles to CDK. Regardless, the past is in the past and it’s imperative that they move forward. Meanwhile, given that we are in the midst of a brand new season, Mizumori and Kirihara will work that much harder for a victory, as it can lead to momentum that leads to championship contention down the road. Keep your eyes peeled for this match heading into ChocoPro #218.

Finally, in the main event of ChocoPro #218, Mei Suruga takes on Sayaka in their latest singles encounter. Their history dates back to the latter’s first days in Gatoh Move in mid-2019. For those that don’t remember, Sayaka wrestled her first exhibition match against Suruga, who had been fairly established in the company by this point. Over the next couple of years, they would continue to share the mat with each other, not only in tag team contests but singles encounters as well. In said singles encounters, it was “The Apple Girl” that emerged victorious each time. This isn’t to take anything away from her opponent on this episode, however, as Gatoh Move’s “Beautiful Cosplayer” has been tireless building a hard-hitting offensive style all her own, not to mention learning from veterans such as Masahiro Takanashi, Minoru Fujita, and Kaori Yoneyama. Can Sayaka pick up a definitive win here, leading to what may be a promising season?