It’s the start of a new chapter for Gatoh Move Pro Wrestling. To kick off the weekend, Gatoh Move will host the Season 13 premiere of ChocoPro. This should be an episode not to miss, as it will feature two key matches and the return of “Too Much Energy” herself, Chie Koishikawa. In addition, the show will wrap up with the traditional post-match janken tournament. This Easter weekend promises to be a stacked one, as there will be three shows in a row, beginning with this one. Without any further delay, let’s take a deep dive into ChocoPro #217. 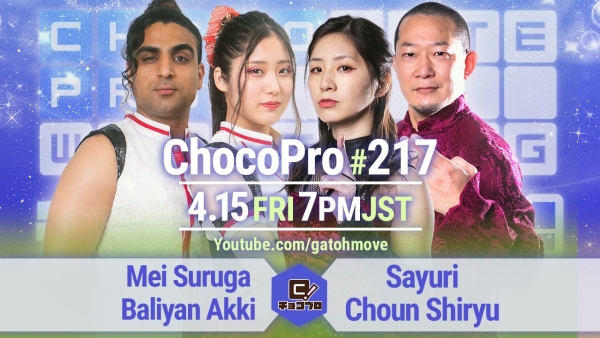 Kicking off ChocoPro #217 will be a tag team contest between two of the featured teams in Gatoh Move. The former Asia Dream Tag Team Champions, Mei Suruga and Baliyan Akki, square off against Sayuri and Chon Shiryu, collectively known as Dragon Ninja. Leading off from ChocoPro #215, Suruga and Akki had two different results. On that particular show, Akki teamed with Masahiro Takanashi in a winning effort against Sayaka and Shin Suzuki. Meanwhile, Suruga experienced a tag team loss on that show, losing to RESET, the team of Emi Sakura and Kaori Yoneyama, alongside Haruka Umesaki. Akki was also involved in the following episode’s battle royal, which was won by Sakura.

Meanwhile, Dragon Ninja are looking for that elusive victory heading into the ChocoPro Season 13 premiere. Back on Episode #214, they fell in a three-way tag team match that featured Black/White Comaneci (Tokiko Kirihara and Antonio Honda) and the reigning Asia Dream Tag Team Champions, CDK, made up of Takanashi and Chris Brookes. Though Sayuri and Shiryu have not been teaming nearly as frequently in recent episodes, they aren’t a duo to overlook. In fact, it’s their combined martial arts techniques that helped make them a formidable team. A victory against Best Bros, however, will require the utmost effort.

Chie Koishikawa and Shin Suzuki vs. Sayaka and Masahiro Takanashi

In the main event of ChocoPro #217, Shin Suzuki teams with the returning Chie Koishikawa to take on the team of Sayaka and Masahiro Takanashi. Koishikawa has been out of action since this past February; on Episode #202, she suffered an injury during a tag team match. This kept her out of in-ring action since then, though she continued to appear on shows for announcing and narration duties. All the while, she was accompanied by her new “injury shark,” a puppet worn over her injured hand. On this episode, she returns to action, teaming with Suzuki in the hopes of coming away with a major victory.

Against a team such as Sayaka and Takanashi, however, “Chiezo” will have to work that much harder. It’s worth noting that Sayaka and Takanashi haven’t teamed since Episode #201, where they lost to Best Bros. Despite this, they stand a solid chance of ending this show with a victory. In addition to Sayaka continuing to hone her craft as a hard-hitting striker, Takanashi’s experience and current status as a tag team titleholder speak volumes. Regardless of the outcome, this main event should help establish the tone for the rest of the season. Whether you’re a long-time viewer or are tuning in for the first time, this will be a show not to miss.