Match Point is an ongoing series at Last Word on Pro Wrestling, where we look at intriguing matchups in indie wrestling and beyond. They may be dream matches, first-time matchups, or hotly anticipated rematches. For the first time, on AEW Dynamite, ROH World Television Champion Minoru Suzuki faces Samoa Joe. Here’s what to know about the match to come.

If there are any two wrestlers in the modern age that embody the term “danger,” they would be Minoru Suzuki and Samoa Joe. “The King” and “The Samoan Submission Machine” have never met in the ring, though their in-ring approaches and reputations aren’t without their similarities. They’re one and the same in that they take great pleasure in inflicting pain on their opponents. Furthermore, their years of experience around the world have made them not only two of the most successful wrestlers in history but among the most feared. When All Elite Wrestling Owner, CEO, and General Manager Tony Khan announced that Minoru Suzuki and Samoa Joe would meet on AEW Dynamite, it didn’t take long for the wrestling world to start talking. Here’s what to know before these two juggernauts square off this Wednesday for the ROH World Television Championship.

Minoru Suzuki vs Samoa Joe – What to Know

Earlier this month, Ring of Honor made a big return with its Supercard of Honor XV event. To say that this was an event full of successes and surprises would be an understatement. Case and point, in one of the featured matches of the show, New Japan Pro-Wrestling legend Minoru Suzuki challenged Rhett Titus for the ROH World Television Championship. Following this six-minute affair, Suzuki emerged victorious with the TV title in his possession. This was an important title match for the sinister “King,” as it was his first on American soil. It was also his first title win outside of Japan since 2018, when he captured the RevPro Undisputed British Tag Team Championship alongside Zack Sabre Jr., who recently won this year’s New Japan Cup.

In terms of surprises, the biggest took place following the Supercard of Honor XV main event. In this match, Jonathan Gresham defeated Bandido to become the undisputed ROH World Champion. Following this, Jay Lethal came to the ring, challenging Gresham to a title match. Gresham took umbrage with Lethal, especially given how he cheated to defeat Lee Moriarty earlier in the night. This culminated in an attack on Gresham by not only Lethal but Sonjay Dutt. This onslaught would be stopped by Samoa Joe, who made a surprise ROH return to confront his former pupil in Lethal and momentarily choke out Dutt. Not long after, Tony Khan announced that Joe signed with All Elite Wrestling.

The Tale of the Tape

Given that this week’s AEW Dynamite marks the first time Minoru Suzuki clashes with Samoa Joe, there isn’t much to go off in terms of historical analysis. However, what we do have is information. This is particularly true given how long Suzuki and Joe have been wrestling. Suzuki began his professional wrestling career in 1988; meanwhile, Joe started wrestling in 1999. On paper, the NJPW legend has the advantage, though there’s much more to consider.

At the age of 53, Minoru Suzuki remains one of the most legitimate performers in wrestling. Given his experience in amateur wrestling, freestyle wrestling, kendo, and mixed martial arts, this should come as little shock. These principles, in addition to pro wrestling, afforded him success all around the world. Among his most notable achievements are 2 Triple Crown Heavyweight Championship wins in All Japan Pro Wrestling, the GHC Heavyweight Championship in Pro Wrestling NOAH, and the IWGP Intercontinental and 2 NEVER Openweight titles in NJPW. His Gotch-Style piledriver is nothing short of devastating, though maneuvers such as his Sleeper and Octopus holds show that he’s just as capable of putting opponents to sleep.

The latter is another commonality shared with his opponent this Wednesday. From Ring of Honor to IMPACT Wrestling to WWE, Samoa Joe’s made his mark anywhere he’s wrestled. At 43 years old, he’s determined to show that he still has much to prove. Prior to becoming a pro wrestler, he was involved in judo and played football in his youth. Joe may be known as “The Samoan Submission Machine,” evidenced by such techniques as the Coquina Clutch, but power-based maneuvers including his signature Muscle Buster are emblematic of his true strength. He’s won world championship gold in ROH and IMPACT, not to mention the NXT and United States Championship titles during his time in WWE. 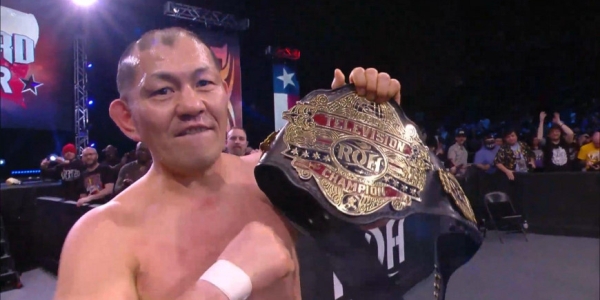 Minoru Suzuki will defend the ROH World Television Championship against Samoa Joe on AEW Dynamite and the prestige of the title in question can’t be overlooked. Since the title was introduced in early 2010, it served as the company’s secondary title, not unlike WWE’s Intercontinental or AEW’s TNT titles. The first champion crowned was Eddie Edwards, who won an eight-man tournament to seize the gold. Other notable ROH TV titleholders throughout history include Christopher Daniels, Roderick Strong, KUSHIDA, Jay Lethal, Tomohiro Ishii, and Adam Cole. As an aside, it was Lethal, Joe’s protege, who not only boasts the longest TV title reign at 567 days but the record for longest combined reign at 798 days.

Speaking of Joe, the ROH World TV Championship is only one of the three men’s singles titles in the company he’s never held. Joe captured the ROH Pure Championship in May of 2005, besting Lethal at that year’s Manhattan Mayhem event in New York City. More significantly, however, he holds the distinction of being the longest-reigning ROH World Champion at 645 days. This reign was history-making not only for its length but the quality of opponents he worked against during his time as champion. From Homicide to Daniels to AJ Styles to Bryan Danielson to a trilogy of title matches against CM Punk, this title reign went a long way in putting Joe on the proverbial map. Throughout the years, the ROH TV title has eluded him, though this may change come Wednesday.

When Minoru Suzuki and Samoa Joe meet in the ring for the first time, expect nothing short of absolute destruction. Over the past several years, Suzuki and Joe have left annihilation in their respective wakes, whether it was to pick up victories, secure championships, or simply satiate their appetites for devastation. Given the sheer dominant nature of both competitors, it will be interesting to see which individual emerges victorious. Will “The King” maintain control of his proverbial throne, or will it be “The Samoan Submission Machine” that adds the ROH World Television Championship to his already extensive résumé? Find out this Wednesday as they square off on AEW Dynamite.