Queen of the North is a big event for Brii Combination Wrestling and this is their third one. The last time QOTN took place was on January 31st, 2020 and the winner of it all- Vanity– became the BCW Women’s Champion, as the title was vacated by Faye Jackson. As of right now, there are a few unknowns in this card but they should all work out by showtime. For one, B3CCA was scheduled to be in a Queen of the North Qualifier (against a TBD opponent) but whether she will be medically cleared is yet to be seen. This might mean that the finals of the QOTN are a threeway match and that just makes it even more exciting! Here’s what to know heading into BCW Queen of the North 3. 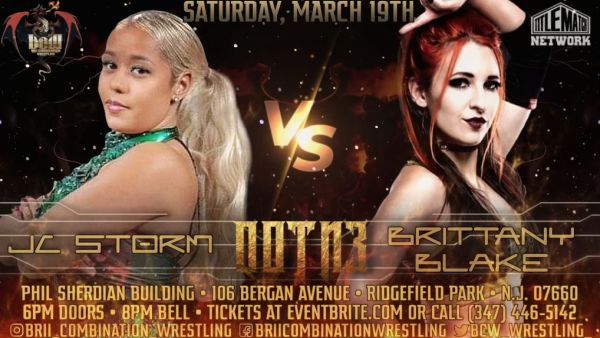 Queen of the North Qualifier: JC Storm vs Brittany Blake

Brittany Blake has had some wins and some losses. Some of her bigger losses, though, came in the ring against wrestlers such as Davienne, Delmi Exo (Major League Wrestling), Leyla Hirsch (All Elite Wrestling), and Kasey Catal. One of the more interesting wins that Blake came back in February for Stand Alone Wrestling and is over none other than the very person she faces in this match: JC Storm. Since Blake has already beaten Storm once, it stands to reason that she can beat her again. Hopefully, this time around, Brittany Blake will also tell JC Storm that she shouldn’t work with wrestlers who were called out during #SpeakingOut. 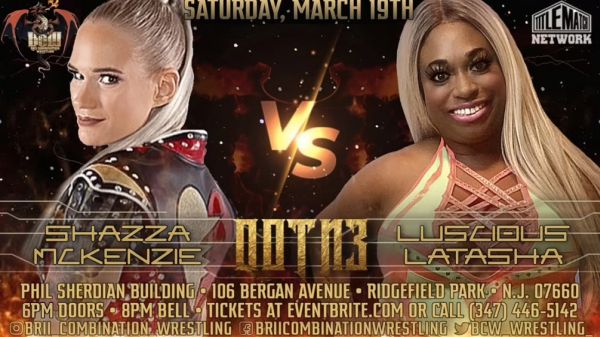 Queen of the North Qualifier: Shazza McKenzie vs Luscious Latasha

Luscious Latasha is a wrestler who has been around for a lot longer than fans think and that experience is going to play a big role here. Latasha also seems poised to take on the world in 2022, so what better way to make people notice than by winning the Queen of the North? Shazza McKenzie hasn’t traveled all the way from Australia to lose, however. Both of these wrestlers have that distinction of being on the verge of having their best year in 2022 and so whoever wins this match could very well go on to win it all. 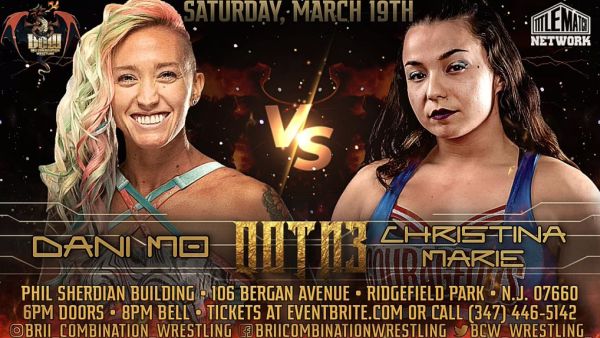 Queen of the North Qualifier: Dani Mo vs Christina Marie

Originally, this match was set to be Dani Mo vs Adena Steele, but with Steele out with an injury, in came Christina Marie. Mo has to be an odds on favorite to win this entire thing, but at the same time, it must now be discussed how her game plan changes since her opponent changed. Christina Marie technically wasn’t even supposed to be in this tournament, so she could really shock everyone by winning this as an outsider. This match will be hard-hitting and not to be missed. 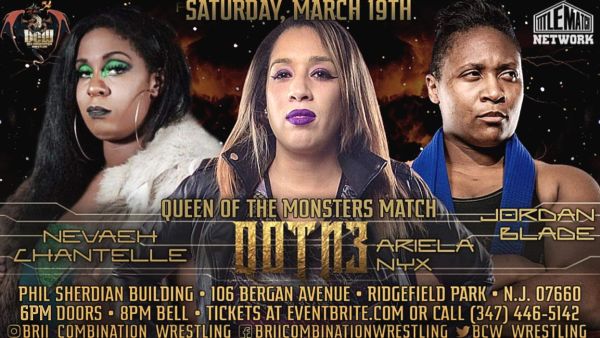 Queen of the Monsters: Nevaeh Chantelle vs Ariela Nyx vs Jordan Blade

The Queen of the Monsters match is pure carnage and not a match for the faint of heart. When considering that Nevaeh Chantelle, Ariela Nyx, and Jordan Blade are all in this match, it is not easy to choose a winner; they all feel dangerous in their own ways. There is also an open spot on the Facebook description for this match, so a fourth wrestler might be added. As of this writing, though, that remains to be seen. This is going to get hardcore and whoever comes out of it the winner won’t be the same wrestler as they were when they went into it. 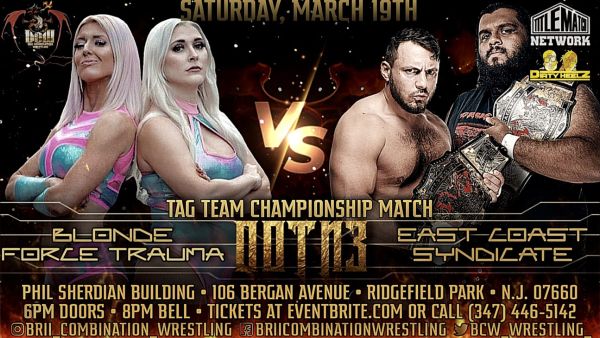 The East Coast Syndicate (Chris Barton and Dominick Denaro) are a tough tag team and that is why they hold the gold. The team of Blonde Force Trauma– Heather Monroe and Ray Lyn– may not be able to equal them in size but they can in both teamwork and toughness. In this match, both teams will have to work to their advantages. ECS should try and keep the bout slower-paced, using their power, while BFT could try and keep their opponents off of their feet. Whichever team better utilizes their strengths in this match will be the true champions. Neither team can let the others play their game though- they must each play their own way at BCW Queen of the North 3. 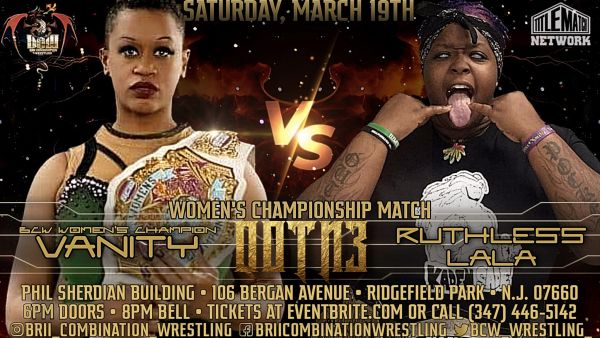 This match has been a long time in the making and, at one point, it felt like neither wrestler would ever step foot in the ring again. Vanity, as BCW Women’s Champion, seemed to be focused on things outside of wrestling- something which Ruthless LaLa called Vanity out on over social media- and this just made matters that much more intense. LaLa was out of action for a while and it seemed like, because of that medical clearance, she may not return to the ring either. This is going to be special for both of these wrestlers; there are those underlying personal issues that have spilled out into the public, but these competitors are at the top of their game and somehow seem to be consistently overlooked and not in enough conversations.

With all of the makings of a big fight feel, Vanity vs Ruthless LaLa is going to be the type of match that, even without knowing their history and the story behind this match, they will explode in the ring. As a fan, it will be great to watch. Hopefully, this match puts both of these wrestlers on more radars, and if not, it’s up to BCW to build their brand for the benefit of all of professional wrestling.

Marina Shafir is perhaps best known for being part of the Four Horsewomen of MMA. With a run in NXT, Shafir has victories over Masha Slamovich in Josh Barnett’s Bloodsport, Savannah Evans at Championship Wrestling from Arizona, and a small string of wins over Reka Tehaka, Danielle Kamela, and Leila Grey on AEW Dark. What all of this means exactly is unclear. Darius Carter, on the other hand, has been on an absolute roll these past few years and it doesn’t seem to be stopping. Though to some it might appear as if Shafir is the favorite to win this match, the real bet is that Carter wins more gold before losing any of it.

Carter won the Warriors of Wrestling Heavyweight Championship back in December of 2021. In January of 2022, Carter defeated Erica Leigh to become the new Pro Wrestling Magic Champion. And the range of opponents that Mr. Carter has bested is simply without compare: names such as Dan Maff, Azrieal, Colby Corino, Eel O’Neal, Josh Woods, and Vita VonStarr. While this will be a great match and Marina Shafir will be a formidable opponent, Darius Carter is in a league all his own right now and no one seems to be able to catch up with him.

Stay tuned to the Last Word on Pro Wrestling for more on this and other stories from around the world of wrestling, as they develop. You can always count on LWOPW to be on top of the major news in the wrestling world, as well as to provide you with analysis, previews, videos, interviews, and editorials on the wrestling world. Check out Brii Combination Wrestling on Facebook and Twitter.