On the previous episode of ChocoPro, Gatoh Move Pro Wrestling fans came away with ample knowledge. In addition to a successful title defense, the Founder of the company announced her return with championship gold in her sights. There’s much to unpack from the events of this episode, but what doesn’t need unpacking is that the Gatoh Move crew always moves forward. To this end, ChocoPro #209 will be nonstop action across two tag team contests. Here’s what to know before this episode airs live on the official Gatoh Move YouTube channel. 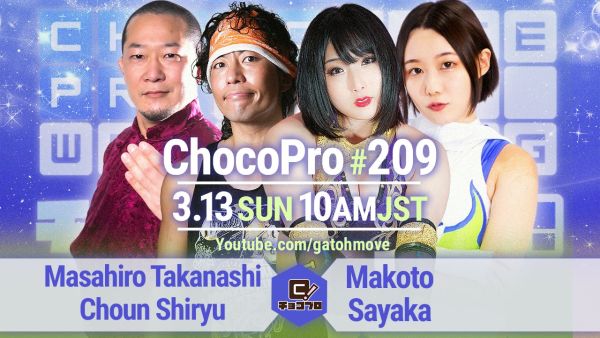 Masahiro Takanashi and Chon Shiryu vs. Makoto and Sayaka

Making her return to Ichigaya Chocolate Square, following roughly one month away, is freelance joshi competitor Makoto. From YMZ Pro Wrestling to Ice Ribbon, this is one competitor that hasn’t been short on work, even recently challenging for the International Ribbon Tag Team Championship. The last time Makoto was in Ichigaya was back on Day 2 of ChocoPro #200, where she fell in a tag team match. She lost alongside her partner for this upcoming match, Sayaka, who’s also been busy outside of Gatoh Move. Earlier this month, she competed for World Wonder Ring Stardom’s New Blood 1 event; in her debut match for the promotion, Sayaka fell to up-and-coming Stardom recruit Momo Kohgo. Needless to say, this upcoming tag team match is one where Makoto and Sayaka will have to get on the same page.

This is especially true when considering the veteran opponents they’ll be stepping up to. Not only is Chon Shiryu a former Super Asia Interim Champion in ChocoPro but Masahiro Takanashi is one-half of the Asia Dream Tag Team Champions alongside fellow Calamari Drunken Kings member and close friend Chris Brookes. Shiryu and Takanashi know each other well as opponents and partners; this makes them an extra challenge, even against competitors as hungry as Makoto and Sayaka. This promises to be an exciting tag team encounter to open ChocoPro #209. 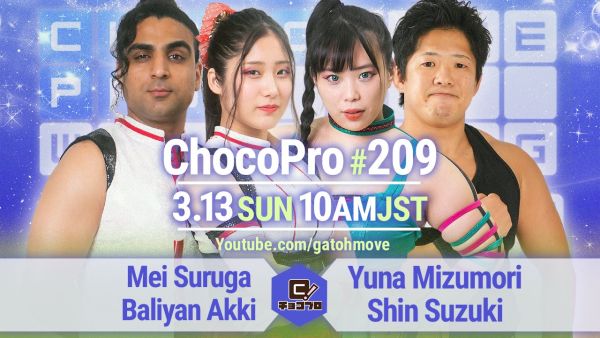 As has become customary for many of these shows, Best Bros will headline ChocoPro #209. Despite no longer being Asia Dream Tag Team Champions, Mei Suruga and Baliyan Akki remain one of the most formidable duos in Gatoh Move. Furthermore, as the current reigning Super Asia Champion, Akki has a new challenger in his sights. On the previous episode of ChocoPro, Akki successfully defended his title against Ganbare Pro representative Ken Ohka. After the match, Emi Sakura, the Founder of Gatoh Move and current All Elite Wrestling star, called in. She announced her return on the ChocoPro 2nd-anniversary show, where she’ll challenge Akki for the Super Asia title. Simply put, Sakura is coming home with big goals in mind.

There is still ample time before the aforementioned show on March 28, and as such, plenty of obstacles await Akki, who confidently refers to himself as the “Ace” of ChocoPro. In this tag team match, Best Bros compete against the energetic duo of Yuna Mizumori and Shin Suzuki. Mizumori and Suzuki bring a unique combination of offense to this match. While the tropical “Yunamon” is a known powerhouse, utilizing sheer strength to take the fight to her opponents, the chipper Suzuki is more technical by comparison. One would imagine that this makes for a winning combination, but if there’s one truth that remains about Best Bros, it’s that they are seldom the underdogs.