Eastern Townships Wrestling Association made their return last month with Don’t Call It A Comeback! (which is available to watch on their YouTube Channel for free). In many ways, ETWA This Is Our Town is the fallout of that show, as a lot went down and it can only bring about more as well!

ETWA This Is Our Town – Full Card 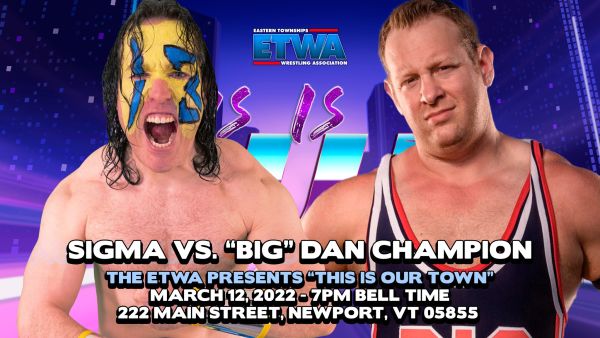 Last month, Sigma came out on the losing end during a match with Bobby Orlando against Owen Brody. This was tricky because Orlando got the pin on Sigma, eliminating the latter from the match. Afterward, Brody executed a cheap roll-up quick pin to win the match. Orlando and Sigma had a show of respect after the match as well. Now, Sigma goes up against “Big” Dan Champion, who is given the name “Big” for a reason. This match will see Sigma wanting to get back to the winning ways while Big Dan will come in looking to make a statement. This match should be as heavy as a car crash. 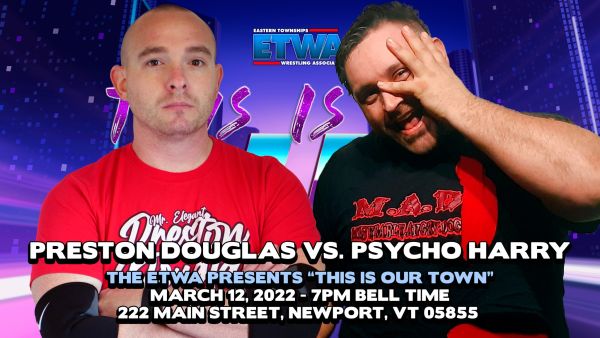 Preston Douglas came out of last month with a win over CPA while Psycho Harry was getting beat up by The Saito Brothers. Douglas could be the favorite to win this match simply because Harry would likely be looking over his shoulder to make sure no one is going to jump him again. 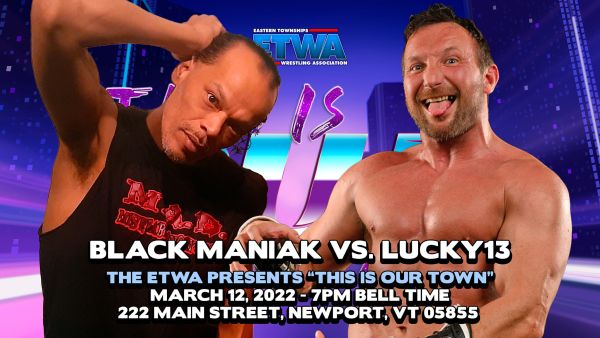 Black Maniak is in the same boat as his tag team partner Psycho Harry and it wouldn’t be too surprising if these two singles matches somehow turned into a tag team match with Maniacal and Disturbed taking on Preston Douglas and Lucky 13. Either way, Lucky 13 has been primarily known as a deathmatch wrestler, but can still hang with the best of them in a pure sense, so if this match allows for it, this could become an instant classic. 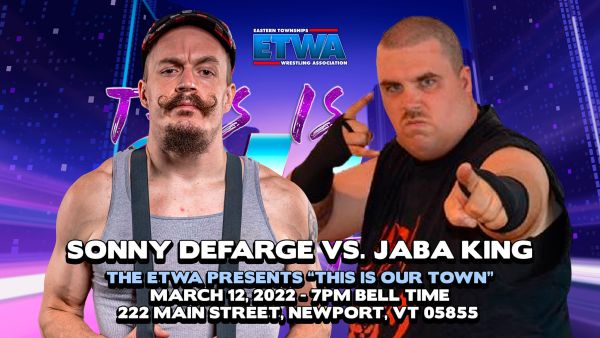 Sonny Defarge took a loss to Jobz last month while Jaba King was part of a tag team match that ended in a No Contest. Defarge and King will fight and scrap to get that win and when it comes right down to it, the winner will end up being whoever wants it just a little bit more. 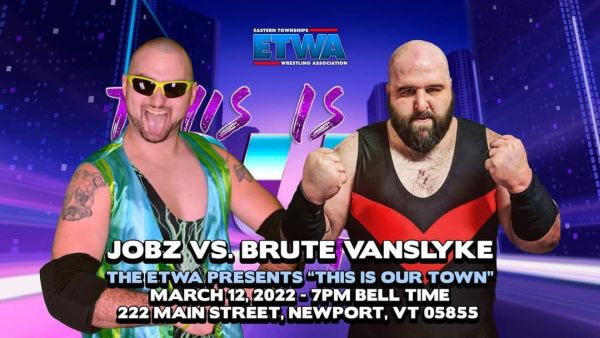 One of the best part about a wrestler being named Jobz is hearing the crowd chant “We Want Jobz!”, among other things, which become unintentionally funny. Jobz comes into this show with a big win over Sonny Defarge, but Brute VanSlyke is no slacker with wins over Johnny Moran, Zakk Ramses, and Richard Holliday. VanSlyke seems to spend most of his time in Immortal Championship Wrestling in New York, though he is also seems to be in a tag team with Garrett Holiday known as Hired Gun Inc. This match will certainly be hard-hitting and will only stand to elevate whoever wins it. 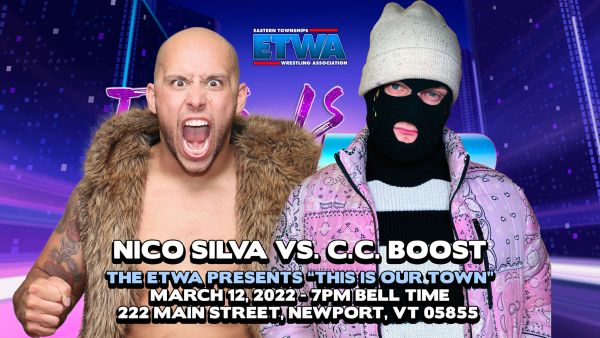 Though Nico Silva has been throughout the New England area, he is perhaps best known for being part of the Top Rope Promotions roster, having an extended feud last year with Matt Magnum for the TRP Heavyweight Championship. C.C. Boost is coming off of a win over Donnie Ray at the last ETWA show, so this should be an interesting match. Either Silva will win this match, showing that he has a place in ETWA, or Boost wins, further proving he is one of the best in ETWA and sending Silva back to TRP. This will really be a match of two top talents in wrestling and it just might steal the show. 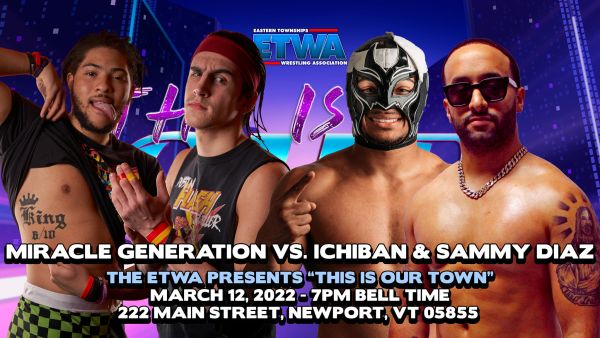 All four of these wrestlers have been tearing things up in Test Of Strength, Blitzkrieg! Pro, and Wrestling Open as of late. Miracle Generation were recently involved in a tag team title match in Blitzkrieg! Pro and they also recently captured the TOS Tag Team Championship. This is going to be a fast-paced, high-flying match that, if you blink, you might miss something. Certainly, whoever wins this match would be in line for a ETWA Tag Team Championship shot and the idea of either of these teams versus The Colony feels like it prints money. 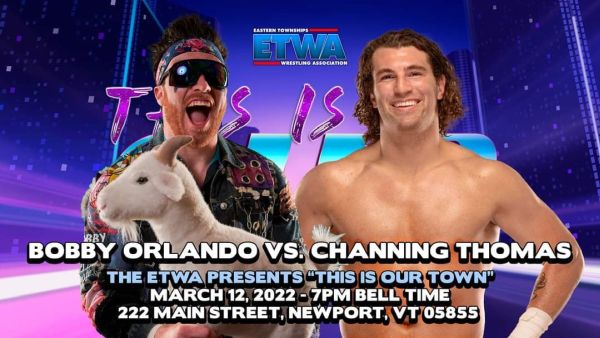 Bobby Orlando only lost last month at Don’t Call It A Comeback because of a cheap roll-up by Owen Brody, which some might even refer to as a fluke. Channing Thomas had a hard-fought match against Anthony Greene, which all wrestling fans should go out of their way to see. Now, Orlando and Thomas, both of whom have been making waves in promotions throughout Massachusetts, meet one on one and it should be fantastic. Both Orlando and Thomas are at the top of their games right now. Both are looking to get back on the winning track. This match is going to be important for those and other reasons; this is going to be a match every wrestling fan needs to go out of their way to watch. 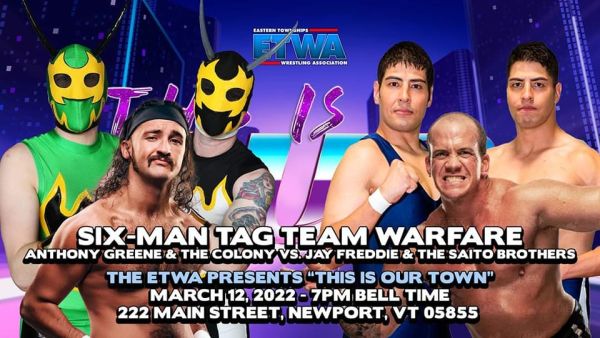 Anthony Greene & The Colony vs Jay Freddie & The Saito Brothers

Though the ETWA Heavyweight Championship is currently vacant, it can be argued that the title should be held by Anthony Greene. With a big victory over Channing Thomas last month, AG joins The Colony, who had their own big victory by becoming the ETWA Tag Team Champions! But Jay Freddie and the Saito Brothers are not to be taken lightly. A match between Greene and Freddie was scheduled before the latter suffered an injury, so that must be in the back of both of their minds. The Saito Brothers also must be thinking about tag team gold in this match. This is going to be an exciting match where anyone can win and the aftermath of it is sure to have huge implications heading out of ETWA This Is Our Town.

ETWA This Is Our Town takes place live on Saturday, March 12th in Newport, Vermont. For tickets and more info please visit: https://www.etwaprowrestling.com/events/2022/3/12/this-is-our-town

Stay tuned to the Last Word on Pro Wrestling for more on this and other stories from around the world of wrestling, as they develop. You can always count on LWOPW to be on top of the major news in the wrestling world. As well as to provide you with analysis, previews, videos, interviews, and editorials on the wrestling world. You can learn more about ETWA on Facebook and Twitter.