Valentine’s Day may have come and gone, but this doesn’t mean that hearts are free from being shattered. Game Changer Wrestling aims to prove as such this Friday when the independent wrestling powerhouse returns to the Ukrainian Cultural Center for GCW Welcome to Heartbreak. There’s much to see and experience at this show, including the GCW in-ring debut of a wrestling veteran with a score to settle. We will also see the Extreme Championship put up for grabs. Before the action unfolds, take a deeper dive into what’s set. 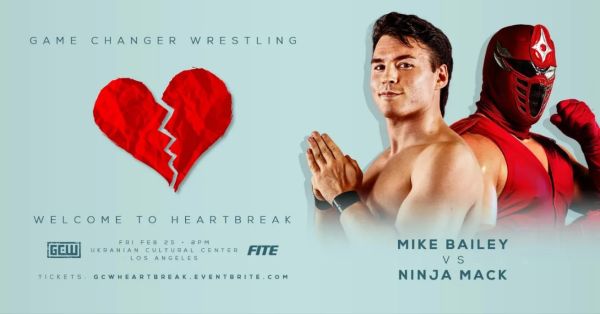 One of the preliminary matches to keep an eye on, heading into GCW Welcome to Heartbreak, is “Speedball” Mike Bailey versus Ninja Mack. This will be a first-time encounter, but just as importantly, it has the makings of a show-stealing match. Both men are known for executing high-flying maneuvers, able to take to the skies with ease. However, they’re just as apt to take their wrestling to higher levels, aiming higher and higher to win. They are very much “human highlight reel” wrestlers, to varying degrees, and it’s fair to expect that this will be on full display this Friday.

In 2022, both Bailey and Mack seemed to hit the ground running. In the case of the Quebec-born “Speedball,” the year began with not only work in GCW and IMPACT Wrestling but involvement in Pro Wrestling Guerrilla’s Battle of Los Angeles tournament. Bailey made it to the finals, where he fell to eventual winner Daniel Garcia. Meanwhile, Mack has been involved in Loko Wrestling, REVOLVER, and GCW. Though Game Changer Wrestling has been one of their shared promotions, it will be at Welcome to Heartbreak when they share the ring for the first time. Keep your eyes peeled, because if you blink, you may miss something. 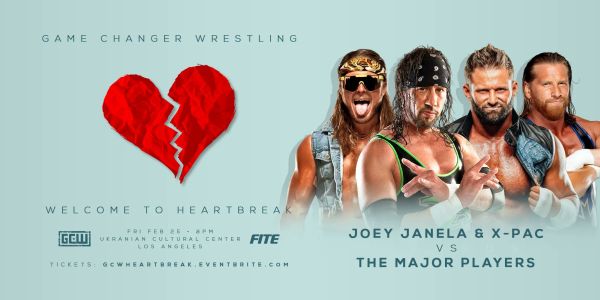 X-Pac Returns to the Ring

Last month, at The WRLD on GCW, Joey Janela took on Matt Cardona in what could best be described as a grudge encounter. This match featured a number of run-ins as well, including from Swoggle and Cardona’s long-time friend and business and tag team partner, Brian Myers. Ultimately, Cardona won the match in question, though the surprises were far from over. Making an unexpected appearance at Hammerstein Ballroom was Sean Waltman, also known as X-Pac, who not only confronted The Major Players but became physically involved. The former WCW Cruiserweight and WWF Light Heavyweight Champion hit Myers with a spinning heel kick before laying out Cardona with an X-Factor. X-Pac stood tall with Janela, sharing a crowd-pleasing moment at Hammerstein.

At Welcome to Heartbreak, X-Pac makes his return to the ring, as well as GCW in-ring debut, in tag team competition. He will be teaming with Janela to take on The Major Players, Cardona and Myers, the latter of whom will also be wrestling his first match in GCW. This feud has not been short on heat, either, as evidenced by the countless Twitter exchanges between X-Pac and Cardona. The biggest question heading into his contest is, how will the veteran star in Waltman perform? It’s been no secret to wrestling fans online that he’s been training for a comeback, so it will be interesting to see how he fares in Los Angeles this Friday. Waltman intends to show that this next run is far more than a nostalgia trip. 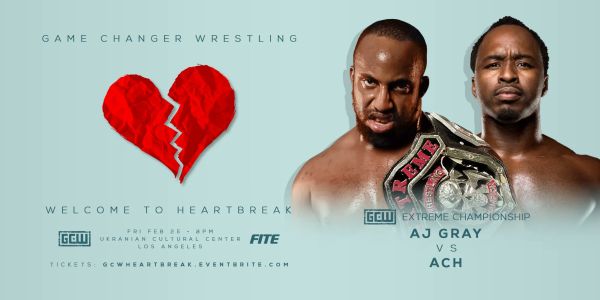 The GCW Extreme Championship Will Be Defended

At GCW Welcome to Heartbreak, the Extreme Championship will be on the line as titleholder AJ Gray defends against challenger ACH. To say that Gray has been on a roll early in 2022 would be an understatement. From capturing the GCW Extreme Championship at Say You Will, shattering PCO’s 1225-day reign, to winning the Grab the Brass Ring Ladder Match at The WRLD on GCW, “Rich Homie Juice” has been determined to make this year entirely his own. It should go without saying that all eyes are on him. Not one to rest on his laurels, the intense Gray will defend his title this Friday against a wrestler just as hungry as he is. Furthermore, this marks the first-time singles encounter between the two men in a GCW ring.

Originally, Gray was set to defend the GCW Extreme Championship against Lio Rush. However, as Welcome to Heartbreak drew closer, it was revealed that Rush would not be performing at the show. In his place will be the faced-paced “Super” ACH. The challenger has kept himself busy on the independent scene this year, appearing for such organizations as West Coast Pro Wrestling and The Crash. Though this will be his first match against Gray in GCW, the two have competed over the years in other locations. Case and point, in 2020, ACH unsuccessfully challenged Gray for the Crown of Glory Championship at Glory Pro Wrestling. This Friday, ACH has a golden opportunity as he vies for the GCW Extreme Championship. Watch this encounter unfold at GCW Welcome to Heartbreak.

GCW Welcome to Heartbreak will take place in Los Angeles, California on February 25, 2022.

Stay tuned to the Last Word on Pro Wrestling for more on this and other stories from around the world of wrestling, as they develop. You can always count on LWOPW to be on top of the major news in the wrestling world, as well as to provide you with analysis, previews, videos, interviews, and editorials on the wrestling world. GCW Welcome to Heartbreak is set to air Friday at 11 PM EST on FITE. Tickets are also available via Eventbrite.