AEW Dynamite emanates from the Municipal Auditorium in Nashville, Tennessee as All Elite Wrestling stars battle it out once more on an action-packed edition of AEW’s premiere Wednesday night program. AEW’s biggest and best stable, The Inner Circle, looks like it’ll be coming to end as civil war commences on AEW Dynamite. “La Mera Mera” looks to brutalize “The OG Badass” and exact her revenge. Plus, the TNT Championships is on the line as “The Spanish God” defends against his fellow “Four Pillars of AEW.” Let’s preview this exciting card that goes down on AEW Dynamite.

This card is stacked from top to bottom and we don’t want to keep you waiting any further. It’s Wednesday night after all, and you know what that means. it’s time to run it down! 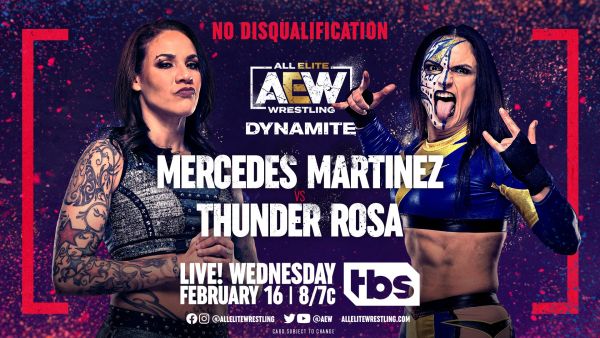 No DQ, No Excuses

Two weeks ago on AEW Rampage, Thunder Rosa and Mercedes Martinez were having a terrific match. Unfortunately, the match would abruptly end when Mercedes chose to use a lead pipe to batter Rosa, leading to a disqualification. After the match, it was revealed that Martinez was hired by the AEW Women’s World Champion Dr. Britt Baker, D.M.D. to take out Thunder Rosa once and for all.

The good doctor was livid at Mercedes for not getting the job done. However, the “OG Badass” went on to state that she did get the job done by incapacitating “La Mera Mera.” Baker expects more and demands results. As long as Thunder Rosa is still standing, the job is not done. This leads to this Wednesday night on Dynamite, Rosa and Martinez will battle it once more, only this time, it’s going to be in a No Disqualification Match.

Thunder Rosa is salivating at the thought of getting her hands on Mercedes after the brutal attack on Rampage. Unfazed, Martinez says “bring it.” Sit tight, folks. It’s going to be one heck of a night this Wednesday. It’s Thunder Rosa versus Mercedes Martinez; no disqualification, no excuses. It all goes down Wednesday night only on TBS! 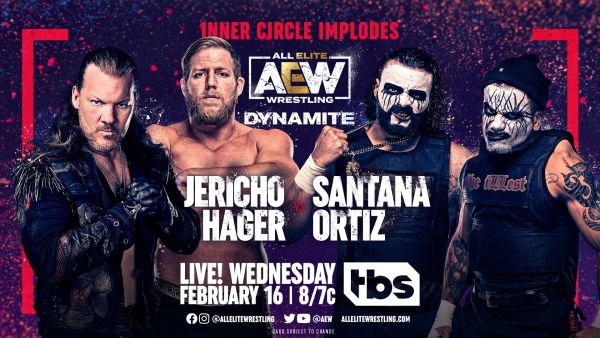 Things got extremely heated between Santana and Ortiz and “Le Champion” Chris Jericho last week on Dynamite. Jake Hager and TNT Champion Sammy Guevara also got roped into this civil war within The Inner Circle. Proud and Powerful would air out their grievances and state that Jericho has been holding them back since day one, and they’re no longer going to take it.

The “Demo God” would fire back and say that if it weren’t for him and The Inner Circle, Santana and Ortiz wouldn’t have main evented pay-per-views, multiple Dynamites, and be the stars they are today. To put salt into the wounds, Jericho went further and said that the former LAX duo had the chance to be AEW World Tag Team Champions, but they blew it falling to The Young Bucks last February.

The situation got even tenser when Guevara stated that he’s done with this whole fighting. Furthermore, if they don’t fix it, he’ll quit the group once more as he exited the ring. Guevara has bigger fish to fry anyway, as he will defend the TNT Championship against Darby Allin on this edition of Dynamite. Ortiz would step in and cut right to the chase, instead of talking they should just hash things out by getting in the ring next week, Santana and Ortiz versus Jericho and Hager mano-a-mano.

Jericho accepted and stated that “attendance is mandatory.” It seems like fans will witness the implosion of one of the most dominant factions in AEW history next week. Don’t miss this civil war of epic proportions within The Inner Circle this week on AEW Dynamite!