This week’s edition of NWA PowerrrSurge will be a special one, as fans of the National Wrestling Alliance will have the opportunity to “Meet The Fixers.” The team of Jay Bradley and Wrecking Ball Legursky has been one of the standout tandems in the NWA and this episode will be theirs. This isn’t to say that the episode will be lacking in action, however, as we will see a replay match from Hard Times 2, a veteran steps inside the squared circle, and much more. Here’s what to expect before the show airs at 6:o5 PM EST on FITE. 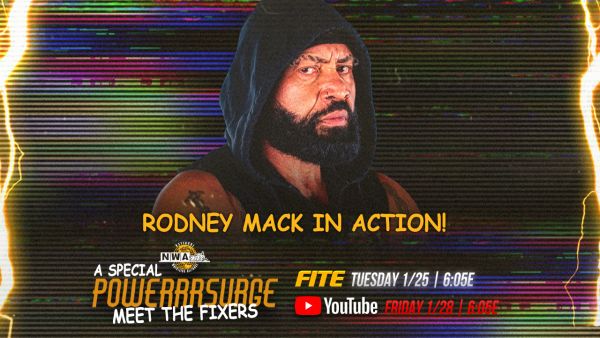 On the January 11 edition of NWA Powerrr, Jax Dane took to the podium to the sound off. To be more specific, he verbally ran down the former Crimson, now known as Anthony Mayweather. However, Dane also took it upon himself to insult the various legends of the NWA, which rose the ire of Rodney Mack, who interrupted the segment at hand. Dane didn’t stop, which resulted in Mack attacking the former. On this week’s edition of PowerrrSurge, Rodney Mack will be in action, though his opponent has yet to be revealed. The real-life husband of Jazz’s career spans roughly two and a half decades. The Lafayette native competed everywhere from Extreme Championship Wrestling to World Wrestling Entertainment to countless independent promotions. Mack has worked in various NWA offshoots as well, but this is his first time competing in the company’s current iteration. Even with Jax Dane’s words still lingering in his mind, expect nothing short of a grizzled performance from the former 3x NWA Texas Heavyweight Champion.

The Fixers Take to the Ring

As the title of this episode would suggest, the “Meet The Fixers” edition of NWA PowerrrSurge will see Jay Bradley and Wrecking Ball Legursky in tag team action. Last week, on Powerrr, The Fixers and Rush Freeman competed in a 3-on-2 handicap match against JTG and Dirty Dango, collectively known as The Dirty Sexy Boys. Though it was Freeman that technically picked up the pinfall victory for his team, The Fixers were instrumental in ensuring that this took place. On this week’s PowerrrSurge, The Fixers take on the duo of Miguel Robles and Fable Jake, both of whom are looking to build momentum in the National Wrestling Alliance. Given how powerful and explosive Bradley and Legursky are, however, securing a victory may be easier said than done.