Pro Wrestling NOAH returns to Edion Arena in Osaka fresh off of BUMPER CROP 2022 in Sendai. This week, NOAH presents HIGHER GROUND 2022. This event follows COVID-19 cases and close contacts. The card has been reshuffled and will still feature a GHC Junior Heavyweight Tag Team Championship match and a GHC National Championship match. Here is the full rundown on the card. 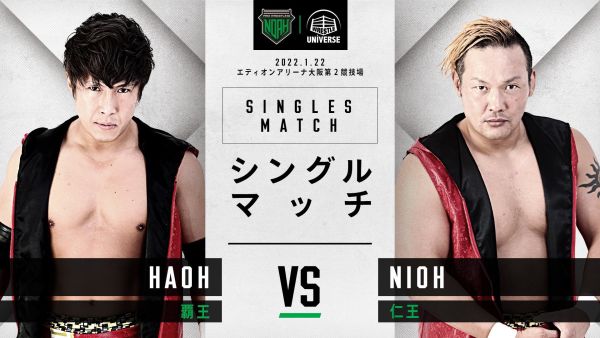 It’s very fitting this match is taking place at an event called HIGHER GROUND. At BUMPER CROP 2022 in Sendai, Nioh and Haoh had several miscommunications in the opening match. These led to an argument, resulting in Haoh coming out later in the night following Daisuke Harada’s win over Seiki Yoshioka. This wasn’t to issue a title challenge, but ask to transfer from KONGO to the NOAH junior regular army. Haoh looked to change his surroundings and reach higher ground in the NOAH junior division.

The offer was accepted to which Nioh took great offense to. An impromptu tag team match was issued, though it didn’t settle the score; rather, it made the situation worse, to the point Haoh and Nioh needed to be separated. Now, Nioh has the chance to make Haoh regret his decision. However, Haoh could show the world he is stronger without KONGO. 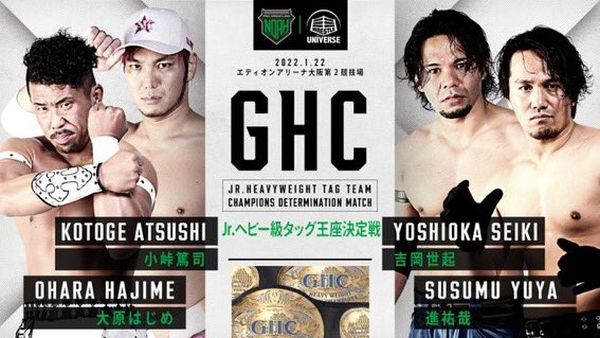 This feud goes all the way back to FULL THROTTLE, when Atsushi Kotoge left his leadership to rejoin Daisuke Harada. Afterward, Seiki Yoshioka disbanded the unit by turning on Hajime Ohara. These teams fought for the GHC Junior Heavyweight Tag Team Championship before, with Kotoge and Ohara taking the belts from the STINGER team. This time, it’s under different circumstances. The original match for HIGHER GROUND 2022 saw HAYATA and Yoshinari Ogawa defend the belts against Kotoge and Ohara.

For the weeks leading up to the show, there was a draw between the teams. Yuya Susumu and Seiki Yoshioka began campaigning to replace Kotoge and Ohara in the title match. However, due to Ogawa being one of the roster members out due to COVID, the belts were vacated. As a result, this tag rivalry took center stage as the junior tag team title decision match. One of these two teams will become two-time champions together, but the question remains, what happens when Ogawa returns?

Kenoh is in his second reign as GHC National Champion, but his first reign was a fun experience as well. The latter saw him face shoot-style wrestlers including Masakatsu Funaki at NOAH’s Back to Budokan show last year. It was a brilliant bout that Funaki almost won, but Kenoh barely escaped with the win to keep his belt. Kenoh successfully retained his championship against Daisuke Harada on January 5. Funaki re-emerged with a request for one last shot at the belt.

Kenoh accepted, and if there was a better time for Funaki to capture his first NOAH belt, it would be now. Kenoh is dealing with his failed attempt at the GHC Heavyweight Tag Team Championship, as well as another member departing KONGO. Meanwhile, Funaki is laser-focused on only Kenoh and bringing the belt back to the M’s Alliance. Now that Kenoh knows what to expect after their first encounter,  will he be able to use that knowledge to beat Funaki decisively? If he takes Funaki lightly, he will find himself without the National Championship come the end of HIGHER GROUND 2022.

Stay tuned to the Last Word on Pro Wrestling for more on this and other stories from around the world of wrestling, as they develop. You can always count on LWOPW to be on top of the major news in the wrestling world, as well as to provide you with analysis, previews, videos, interviews, and editorials on the wrestling world. You can watch Pro Wrestling NOAH as well as DDT, TJPW, and more on Wrestle Universe and ABEMA.