All Elite Wrestling rang in the new year with a massive bang last week. 2022 started off with three amazing shows that provided AEW fans with all the tremendous wrestling action they could handle on the first week of the new year. There’s no rest for the wicked. So, here is a preview of another hot edition of AEW Dynamite, featuring CM Punk battling Wardlow and much more.

In this edition of Dynamite, “The Best In The World” will have his hands full against “Mr. Mayhem.” The mastodon of Team Taz seeks revenge against the high-flying Dante Martin. Plus, the Interim TNT Championship will be on the line as “The Spanish God” defends his newly-won crown against the dangerous “Red Death”. Another great episode of everyone’s favorite Wednesday night wrestling program is coming your way! Without further ado, let’s run it down! 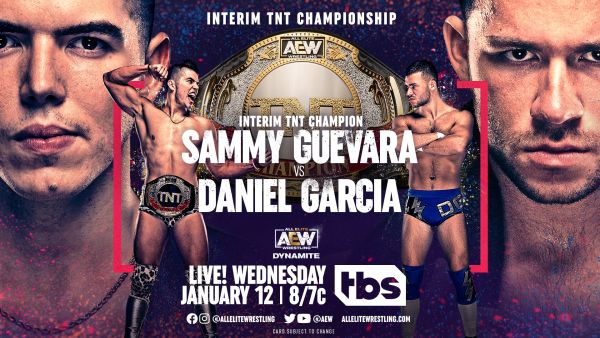 The Battle of the Belts went through a major change a day before it would commence. Due to “medical protocol,” the current TNT Champion, Cody Rhodes, was unable to compete and defend the gold against former champion Sammy Guevara. AEW higher-ups had to make a decision and opted to replace Cody with his brother Dustin Rhodes in the matchup opposite Guevara to crown an Interim TNT Champion. At Battle of the Belts, these two put on quite a show in the opening contest. They went back and forth for the majority of the match, unleashing every devastating move in their arsenals to claim the gold for themselves. When the dust settled, Guevara stood tall with his arm raised high and the title back in his possession.

These two warriors ended the match how they started it: showing tremendous respect towards one another. That was until Daniel Garcia decided to get involved and taint this wonderful moment. Just moments later, Guevara furiously challenged Garcia to a match this Wednesday night on AEW Dynamite and he was willing to put the Interim TNT Championship up for grabs. It looks like fans are in for a treat, as this was made official Saturday night. The Interim TNT Champion, Sammy Guevara, seeks revenge as “Red Death” Daniel Garcia looks to break Sammy’s heart once again by prying away the TNT Championship. See it all go down this Wednesday night live on TBS!

CM Punk wants MJF in that AEW ring and would go through hell and back to secure the opportunity to do so. These two have been tangled in an extremely heated war of words for the past couple of months now. However, Punk has just had about enough of talking and wants to settle this all in the ring. MJF, being the way he is, wants nothing to do with CM Punk. MJF claimed that he doesn’t need it. However, CM Punk does and he’s not going to compete in that ring just to satisfy Punk. Again, the time for talk has ended if you ask CM Punk and that’s why he had to take it into his own hands to evoke an appropriate response from MJF.

Punk cost MJF his very first match in 2022 by hitting the GTS on Capt. Shawn Dean. That disqualification decision puts MJF’s 2022 AEW Record at zero wins and one loss to start the new year. CM Punk is looking to push every button that he can possibly push in order to stand toe to toe with MJF inside a wrestling ring. Still not wavering, MJF chose to unleash his monster Wardlow on CM Punk this week on AEW Dynamite. Punk willingly accepted the challenge and claimed that sooner rather than later, MJF is going to run out of people to hide behind and there will be nowhere to run. Will “Mr. Mayhem” Wardlow do his employer’s bidding and destroy Punk? Or will CM Punk be another step closer to getting his hands on MJF?