NXT New Year’s Evil was born last year and will be making its return this year for the splattered-paint brand. Every match feels major, however, and it could be the best edition of NXT TV in a very long time. Three major championship matches are scheduled for the show along with the NXT return of WALTER who will team with Imperium to take on Raw Tag Team Champion Riddle and MSK. It should be one heck of a night. Here’s a look at NXT New Year’s Evil 2022.

Mandy Rose has been on top of NXT 2.0 essentially since it started as Toxic Attraction holds all the women’s gold. It has led to her becoming more confident than ever, meaning she feels unbeatable. Well, that could come back to hurt her Tuesday night as she is set to defend the NXT Women’s Championship against Cora Jade and Raquel Gonzalez. Jade has been the rising star of the women’s division, picking up major win after major win, including one over Rose. The 20-year-old has positioned herself to be a staple of the brand with a potential NXT Women’s Championship win being in her future at New Year’s Evil. Gonzalez, on the other hand, is hoping to get the title back that she was screwed out of. It should be an interesting night where anyone can walk out champion. 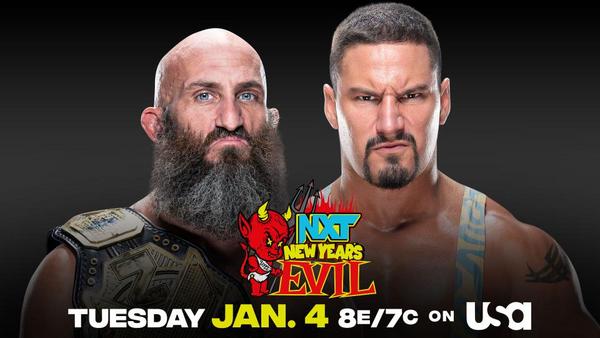 The rematch is here. Tommaso Ciampa will defend the NXT Championship against Bron Breakker for a second time after Breakker pinned Ciampa inside WarGames to win it for the new generation. If there’s one thing that has remained consistent since NXT 2.0 has come to light is the rise of Breakker. He is not only the future of the brand but WWE as a whole. The best match of his career was against Ciampa, who hit everything he had in the tank to put Breakker down once and for all. Unfortunately for the two-time NXT Champion, Breakker knows what he needs to do to defeat Ciampa, meaning the reign will likely be coming to an end. “The Psycho Killer” will do what he can but it is Breakker’s time to become NXT Champion.