Gatoh Move Pro Wrestling is set to leave 2021 in the rearview as its core competitors and guest stars alike look toward the future. To ring in 2022, the company will hold its New Year’s Day Special event in ChocoPro #188. This show features a sizable collection of the aforementioned personalities. Furthermore, depending on who comes away victorious, certain wrestlers may find themselves achieving more success in the long term. If you’re planning on tuning in, as we turn the page toward a brand new year, here is what to know ahead of time. 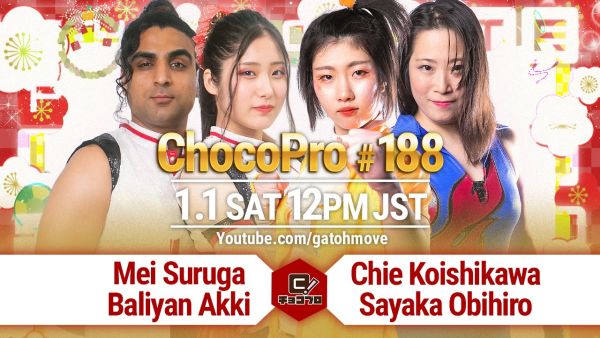 A New Year’s Day edition of ChocoPro wouldn’t be quite right without its Asia Dream Tag Team Champions. Best Bros, the duo of Baliyan Akki and the recently returned Mei Suruga, have been nigh unstoppable since first winning the purple belts on the tail-end of 2020. From RESET to Egg Tarts to Tropikawaid and beyond, they’ve bested every team that stepped up to challenge for the gold. ChocoPro Season 11 is going to be notable for numerous reasons, among them being its tag team scene. With that said, Best Bros enter this episode with a chip on their collective shoulder. The previous episode saw them defend the titles against Calamari Drunken Kings, the duo of Masahiro Takanashi and Chris Brookes. This match went to a 30-minute draw, and while the champions retained, a distraught Akki left as if a draw hurt him more than a loss.

On ChocoPro #188, in nontitle competition, Best Bros will take on the up-and-coming and veteran tandem of Chie Koishikawa and Sayaka Obihiro. It’s important to note that these two individuals are coming into this show with momentum on their side. On Episode #186, they were able to overcome the unpredictable duo of Kappa Kozo and Dragon Sakura no Bo. This was a sizable victory for Koishikawa and Obihiro; consider their run-ins with Kozo on a number of shows at this point. Now, they are set to take on the tag team champions. Needless to say, a win here could slot the challengers into title contention. 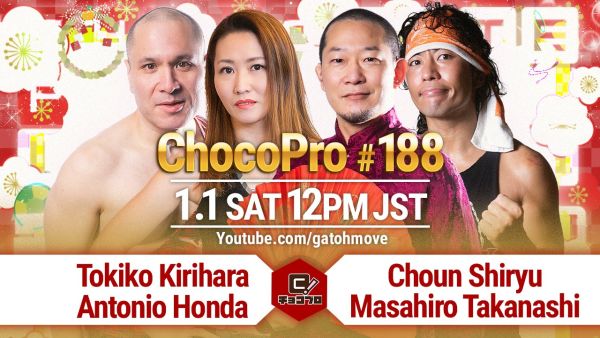 Another notable ChocoPro tag team that will be in action on this New Year’s Day episode is Black Comaneci, or White Comaneci depending on the occasion. “Tricksters” would be perhaps the aptest term that could be used to describe Tokiko Kirihara and Antonio Honda when they join forces. This isn’t to say that aren’t formidable from bell to bell, though. On Episode #186, Honda challenged the Super Asia Interim Champion, Chon Shiryu, in the main event. Despite his best efforts in this near-25-minute match, it was Shiryu that retained the title. Now, “The Honey Hunter” reunites with Kirihara as they take on the veteran duo of Shiryu and Masahiro Takanashi.

One of the other big stories of ChocoPro Season 11 is Shiryu himself. To be more specific, as he’s the interim champion of Gatoh Move, there will come a time when he eventually meets fellow Super Asia titleholder Minoru Fujita. Who’s to say that viewers won’t see this match sooner than later? Regardless, as the interim champion, “The Dragon” has proven that he’s ready for any challenge. On ChocoPro #188, he teams with his longtime friend and in-ring rival, Masahiro Takanashi, who’s been instrumental in ChocoPro’s growth in the absence of Emi Sakura. Given the dynamics that these teams share, this will be another match not to miss.

Finally, in the lone singles match of ChocoPro #188, “Tropical Yahho” Yuna Mizumori takes on the hard-hitting “Beautiful Cosplayer” of Gatoh Move, Sayaka. On the previous episode, Sayaka tested her mettle against the wily veteran, Kaori Yoneyama, who’s been known to be quite dominant within the walls of Ichigaya Chocolate Square. Given that she was voted as the Season 10 MVP, Sayaka has incredible expectations set upon her in Season 11. In December alone, she’s gone toe-to-toe with deathmatch enthusiast Rina Yamashita. Additionally, Sayaka picked up a recent tag team victory over Chie Koishikawa and Baliyan Akki. However, on this episode, she stands alone against a colorful powerhouse.

Yuna Mizumori will be heading into ChocoPro #188 with one goal in mind: to win. In the early part of Season 11, “Yunamon” has struggled to pick up victories. This is true whether it was in the Christmas Rumble match on Episode #184 or against Best Bros on Episode #185, just to name a few examples. Furthermore, on the previous episode, she upset Toru Owashi, becoming the DDT Ironman Heavymetalweight Champion for a brief period. A victory over Sayaka, who’s been having one great showing after another in ChocoPro, may very well be the ticket “The Tropical Girl” needs toward more sustained success. Watch this match unfold on the official Gatoh Move YouTube channel.