The era of AEW Dynamite on TNT ends on this night in a special edition of the Wednesday night program dubbed New Year’s Smash. How fitting is it that the last Dynamite of 2021, and on TNT, will be held live in the spiritual home of All Elite Wrestling, Daily’s Place in Jacksonville, Florida? Many extremely memorable moments were made and witnessed in that very building. Dynamite was broadcast live on TNT on Wednesdays over two fruitful years. However, fear not; AEW makes its way to the “Mothership”, as they call it. Their move to TBS, a broadcasting network rich with wrestling history, will kickstart a new era for the company and light a brand new fire that will carve out its own legacy over time. Fans are extremely excited about what’s in store for AEW on TBS!

On this week’s Dynamite, the last semifinals matchup of the TBS Women’s Championship tournament commences as “La Mera Mera” takes on a daunting and undefeated opponent. As well as the return of a legendary wrestling figure on the commentary booth. Plus, the CHAOS contingent collides with a dangerous trio who has some undisputed history. Let us end the year right with another intense edition of everyone’s favorite Wednesday night wrestling show. It’s Wednesday night after all, and you know what that means. It’s time for Dynamite! Let’s run it down. 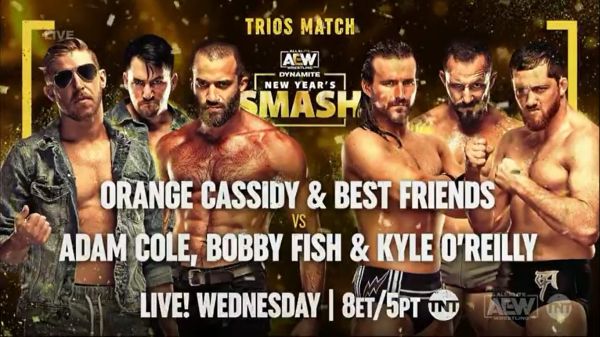 The In-Ring Debut of “The Violent Artist”

Kyle O’Reilly made his shocking AEW debut on last week’s Holiday Bash edition of Dynamite. In the middle of a heated matchup between Orange Cassidy and Adam Cole, O’Reilly would appear out of nowhere, as the referee was distracted, and absolutely obliterated Cassidy. This assault led to Cole hitting The Boom and covering Orange for the win. “The Violent Artist” was Adam Cole’s “surprise” all along. As Orange Cassidy was looking up at the lights, Cole, O’Reilly, and, Bobby Fish stood tall in the middle of the ring over “Freshly Squeezed’s” battered body. This trio has finally reunited, to the shock of the fans as well as seemingly to The Young Bucks. These three men have a lot of history together and have won championships as one formidable and dangerous unit. Now that they’re all in AEW, what kind of damage will they cause together?

Well, we’ll probably get an answer to that very question this Wednesday night. Orange Cassidy looks to even the odds with the Best Friends by his side as they face off against the trio of Cole, Fish, and, O’Reilly, the latter who’s making his official AEW in-ring debut, in Trios action. This rivalry between the CHAOS contingent and The Elite has been tense, to say the very least. The inclusion of Kyle in this fight will only intensify the war that’s brewing. Will the Best Friends and Cassidy avenge his loss last week or will Cole, Fish, and O’Reilly get their first win in AEW as a trio?

The TBS Championship Tournament to crown the first-ever TBS Women’s Champion has been truly amazing, albeit, a grueling one. Only three women are left, one being Ruby Soho who has already punched her ticket into the finals, and the other two looking to advance themselves are Thunder Rosa and Jade Cargill. Both women had the advantage of a first-round bye in the tournament.

However, both Rosa and Cargill still had to go through tough competition in the form of Red Velvet and Jamie Hayter. Both women have also been on a roll, Rosa with her nine-match winning streak and Cargill remaining undefeated in singles competition. Two extremely talented wrestlers, one spot in the finals. Who will claim it for themselves and set up a date opposite Ruby Soho with the TBS Women’s Championship hanging in the balance? Find out this Wednesday night live on TNT!