SEAdLINNNG returns to Korakuen Hall for their final show of the year. This show features two title matches, a surprise participant, and the return of Ryo Mizunami from All Elite Wrestling. Here’s what to know about the SEAdLINNNG year-end show for 2021. 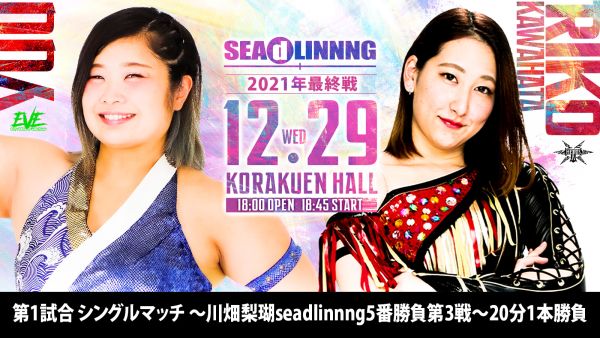 The opener of the SEAdLINNNG year-end show features rookie mainstay Kawahata taking on the hoss, Yuu. Kawahata has been showing how much she has improved each show and has definitely got the perfect opponent with Yuu. This should be quite competitive, but Yuu will more than likely pick up the victory. 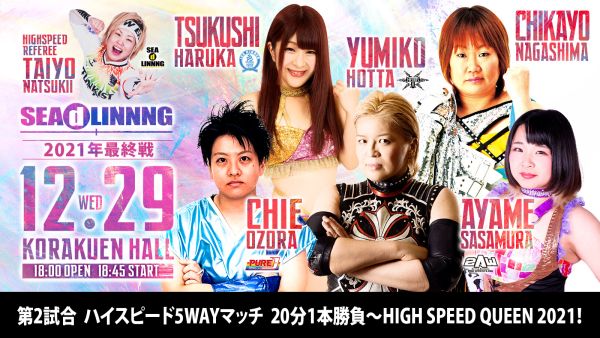 The typical High Speed wrestlers will be featured in a five-way match including Yumiko Hotta. Hotta is famously not High Speed in the slightest. In her later years, you’ll be lucky to see her move faster than walking, so this should be interesting with some of wrestling’s quickest. It doesn’t matter who wins because this will just be entertainment at SEAdLINNNG’s finest. 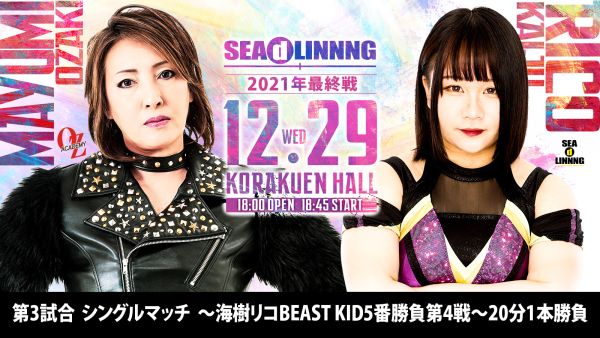 Mayumi Ozaki has only made a handful of appearances in SEAdLINNNG as she primarily appears in her own promotion Oz Academy or Pro Wrestling WAVE, but she and Riko Kaiju have history together. They were both featured in a High Speed bout during Yoshiko’s produce last year, losing to Kaho Kobayashi. With Kaiju on a mission to prove herself as one of the next rising stars in Joshi, she has an uphill battle against one of the best to ever do it. However, Kaiju might not last long with the queen of the street fight. 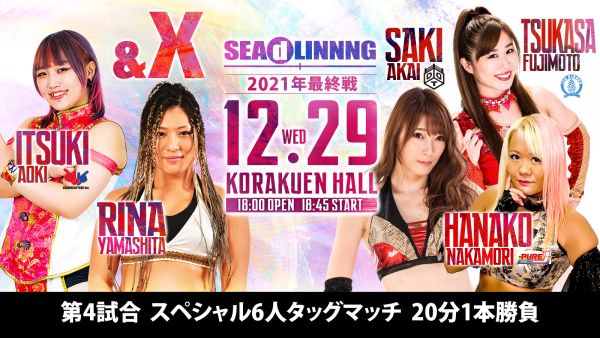 As soon as it was announced that there was going to be an X part of this already huge tag team match, rumors were circulating on just who might appear for the company. There are plenty of big names in Japan to choose from, but with a little hint on social media, it looks like fans could finally see the return of Yoshiko. Since Nanae Takahashi is stepping away for a while after this show, they’re missing the big name in SEAd and that is Yoshiko herself, who has been out with an injury for a number of months. Whoever the big surprise turns out to be this will be an amazing watch to gear people up for the next two bouts. 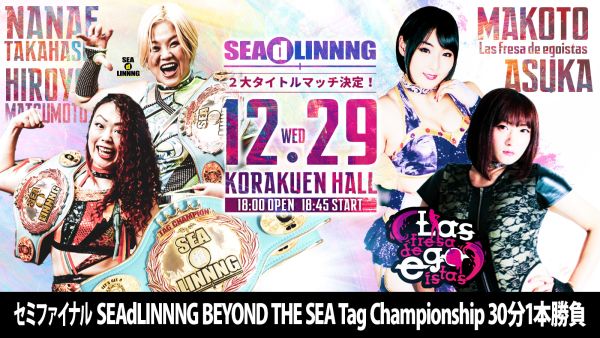 Beyond The Sea Tag Championship: Nanae Takahashi and Hiroyo Matsumoto (c) vs Makoto and ASUKA

While Nanae Takahashi took some time off recently, she also took the time to announce her hiatus and soon-to-be departure from SEAdLINNNG, the company she built from the ground up, citing her mental health as being one of the driving factors. However, her final match before hiatus will be defending the Beyond the Sea Tag Team Championship with Hiroyo Matsumoto against the winners of the recent tag tournament and former champions, Makoto and ASUKA of Las Fresa de Egoistas. Makoto and ASUKA have been proving why they’re one of the best tag teams in Japan by putting on excellent matches and it’s sure to be no different here. With Takahashi’s departure looming, it seems like Las Egos will once again be the tag team champions heading into the new year.

Beyond the Sea Championship: Ryo Mizunami (c) vs Arisa Nakajima

The main event was announced months ago and SEAdLINNNG has done without their champion Ryo Mizunami for some time now since she went back to the U.S to work for AEW, even taking the Beyond the Sea Championship with her during her matches on AEW Dark. While she’s been away, Arisa Nakajima has been consistent with her work as always and has gotten quite the mean streak. In Nakajima’s mind, there is no way that she will let Mizunami leave with that championship again. This match has all the potential for fans to be talking about this for a long time, and rightfully so, with how skilled these performers are. It could go either way as no one was expecting “Aniki” to take the title to AEW with her, but Nakajima is in a completely different position with Takahashi leaving, opening a gap for her to fill as the one to beat.