Gatoh Move Pro Wrestling will be wrapping up the holiday weekend with Part 2 of its ChocoPro Christmas Special. There’s much to celebrate on this episode beyond the traditional holiday fare, too. On this episode, one of the show’s brightest stars returns, bringing her trademark mischief back to the show as well. This, and more, is set for ChocoPro #185. If you’re looking for a way to wrap up the holiday weekend, look no further than the official Gatoh Move YouTube channel. Let’s take a closer look at the action to come. 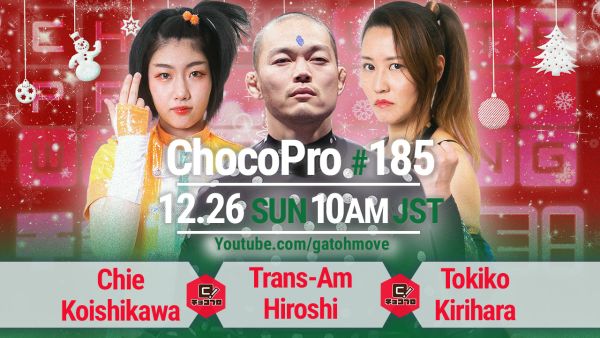 ChocoPro #185 will kick off with a three-way match pitting “Too Much Energy” Chie Koishikawa against “The Golden Six Pack” Tokiko Kirihara and the returning veteran, Trans-Am Hiroshi. Both Koishikawa and Kirihara have been scheduled for action on the episode prior. While “Chiezo” will have teamed with Baliyan Akki to take on Sayaka and Masahiro Takanashi, “Otoki-san” will have participated in the Christmas Rumble contest. Regardless of these contests’ outcomes, both competitors will be coming into this match at the top of their game. One of the main reasons for this is that they will also be facing a seasoned competitor that’s difficult to prepare for.

Enter Trans-Am Hiroshi, the yoga expert with what many fans consider the voice of an angel. This particular individual is a mainstay of Pro Wrestling BASARA, often competing in multi-person and gimmick contests. Furthermore, he was part of Tokyo Joshi Pro-Wrestling’s recent Inspiration #3 event, picking up a victory over Pom Harajuku. On ChocoPro #185, he makes his first appearance in Ichigaya Chocolate Square since Episode #159 this past September. On this episode, he teamed with Antonio Honda in a losing effort against Takanashi and Chris Brookes, collectively known as Calamari Drunken Kings. Can Hiroshi make his return a winning one?

It’s time to celebrate as Mei Suruga makes her ChocoPro return on Episode #185. Since this past autumn, Suruga has been in America, appearing alongside Lulu Pencil and mentor Emi Sakura in All Elite Wrestling. “Mei-chan” adopted a more regal personality to match “The Killer Queen” Sakura, appearing on AEW Dark and Dark: Elevation on multiple occasions. Suruga even competed on Dark, teaming with Sakura in a losing effort against Ryo Mizunami and fellow Sakura protege Riho. On ChocoPro #185, Suruga returns to Ichigaya and it’s nothing short of fitting that it’s alongside Baliyan Akki. For the first time since ChocoPro #168 this past October, Best Bros are back together.

The return of Best Bros isn’t going to be easy, however, which brings us to their opponents. Yuna Mizumori and Masahiro Takanashi have teamed on multiple occasions, often coming away the victors. Furthermore, both competitors have ties to Chris Brookes, whether it’s with “Yunamon” as TropiCalamari or the beer-loving Takanashi as Calamari Drunken Kings. Simply put, one shouldn’t discount Mizumori and Takanashi as a team. However, there are many reasons why Suruga and Akki have been Asia Dream Tag Team Champions for over 350 days. Given the stakes tied to the first match back of Best Bros, it’s safe to bet that the titleholders will emerge victorious this holiday season.