Merriment and cheer fill the air and there are few places where this is as true as Ichigaya Chocolate Square. To celebrate Christmas, Gatoh Move Pro Wrestling has a jam-packed weekend, starting with ChocoPro #184. On the previous episode, Baliyan Akki teased that Mei Suruga, who had been spending the past month or so in America for All Elite Wrestling, will be making her return. This will be made apparent in the upcoming preview for ChocoPro #185. Simply put, Gatoh Move promises a multiday celebration. Here’s what to know about Episode #184, the ChocoPro Christmas Special, Part 1. 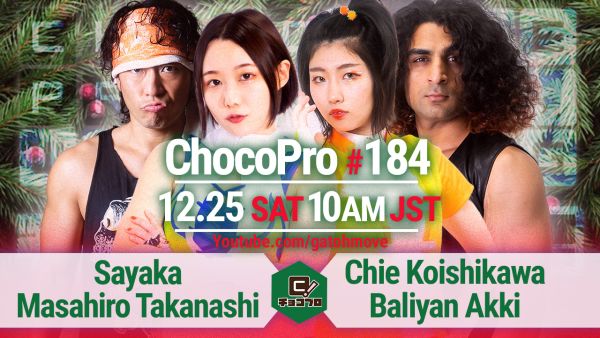 Sayaka and Masahiro Takanashi vs. Chie Koishikawa and Baliyan Akki

If there’s any one wrestler most excited to compete in Ichigaya Chocolate Square this holiday weekend, it’s Baliyan Akki. Given the impending return of Mei Suruga, his tag team partner and fellow Asia Dream tag team titleholder, this should come as no surprise. Akki had his ups and downs, though more of the latter, throughout the previous season. Many have believed his down luck to be due to the absence of the devious “Apple Girl” herself. However, as Season 11 is still very much in its infancy, Akki intends on making the most of this new chapter. On ChocoPro #184, he joins forces with “Too Much Energy” Chie Koishikawa, who continues to build momentum as one of the must-see young joshi stars.

On this episode, Akki and Koishikawa team up to take on the relative rookie and veteran duo of Sayaka and Masahiro Takanashi. This won’t be the first time that they’ve teamed up, either. Think back to ChocoPro #173, where they fell in a valiant effort to the duo of Koishikawa and the wily Kaori Yoneyama. Speaking of momentum, Sayaka has seen a surge throughout ChocoPro Season 10. In fact, she was named that season’s MVP by the fans on Twitter. It’s easy to imagine that she will be looking to build a resume of victories throughout Season 11, potentially becoming a 2x ChocoPro MVP. See how this match unfolds on the official Gatoh Move YouTube channel.

It wouldn’t be a Christmas-themed episode without a match type to complement it. This is where “Sakura Santa” comes into play, as the jolly founder of Gatoh Move will be presenting a Christmas Rumble. It’s every wrestler for him and herself as they battle to be the last one standing. The six competitors set to take part in what should be a crowded match will be Antonio Honda, Tokiko Kirihara, Chon Shiryu, Yuna Mizumori, Chris Brookes, and Sayaka Obihiro. There are many elements at play in this match. This is particularly true when one dives deep into the details of the match itself. This makes the Christmas Rumble all the more difficult to predict.

To start, consider that Antonio Honda and Tokiko Kirihara are part of the Black/White Comaneci tag team; one must wonder if they will play nice, teaming up against other competitors. Speaking of teams, one must consider the duo of TropiCalamari, Yuna Mizumori and Chris Brookes. On the Season 11 Premiere episode, they lost to Egg Tarts, so a victory for either teammate would be vital here. This doesn’t even begin to touch on the veteran presences of Sayaka Obihiro and the current interm Super Asia Champion, Chon Shiryu, both of whom know the Ichigaya venue inside and out. Are you a viewer that’s tired of singing Christmas carols and watching yule logs during this time of year? This Christmas Rumble may prove to be a solid change of pace.