After a slump in ratings and critical acclaim throughout 2020 and 2021, and facing stiffer competition than ever from the young, energetic and growing rival promotion All Elite Wrestling, World Wrestling Entertainment has been making an effort to go back to basics with its flagship show Monday Night Raw. After the broadcast became bogged down by meandering plotlines like Alexa Bliss’s demonic possession during its ThunderDome era, the action is now all about the belt: Becky Lynch is once again in possession of the Raw Women’s Championship after swapping the Friday Night SmackDown women’s title for it and fighting former friend Liv Morgan for it. Big E finds his WWE Championship reign beset by heel challengers Seth Rollins, Kevin Owens, as well as Bobby Lashley. At the moment, all eyes are on Big E and Liv Morgan.

WWE viewers are accustomed to seeing both Liv Morgan and Big E as part of notable and popular tag teams. They would not be the first tag team players to break out as singles stars, but neither’s trajectory has been smooth sailing, despite the prominent role they are both poised to play at WWE’s inaugural Day 1 pay-per-view. Here’s what to know for both Liv Morgan and Big E. 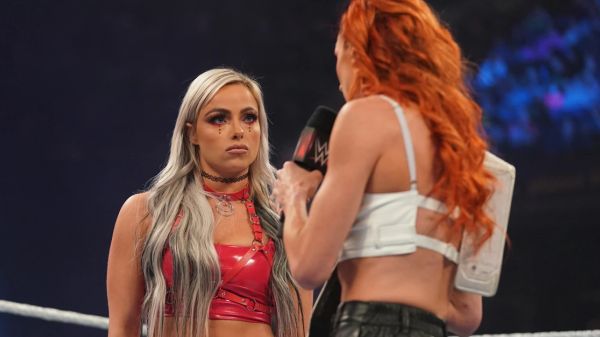 With the release of Ruby Soho and her debut for AEW, The Riott Squad permanently bit the dust. This left Liv Morgan the last woman standing of the former trio, back in singles competition. Morgan is a popular figure amongst WWE’s fans; though her appearances on television tend to be sparing, when she is present she moves with athletically driven vivacity reminiscent of  Madusa. She is a wrestler’s wrestler: Morgan knows what she’s doing in the ring, and her character truly needs little more motivation than that she loves her sport and wants to prove herself. Her WWE Network documentary spot “Liv Forever” covered Morgan’s strong-willed journey from a small upper East Coast town and turbulent family background to WWE, and how her career has been one of fits and starts as she and the powers that be struggle to find a creative direction.

All of that seemed to change when she heatedly confronted Lynch and was insulted by her. Morgan, always a lovable underdog, had finally been able to spin the affection and sympathy fans hold towards her into a galvanizing moment. However, on December 20’s Raw, a contrived skit ran involving Morgan attacking a student at Lynch’s training facility, thinking that she was attacking Lynch. It was a curious twist, to paint Morgan, the babyface of the storyline and a heretofore sympathetic figure, as the aggressor. Morgan’s personal history and considerable in-ring abilities are all she needs in the way of an image: Bret Hart, after all, never needed much more than that. But Morgan hasn’t been given many chances to articulate her organically compelling story. “Liv Forever” showed a Morgan owning her story, as did her confrontation with Lynch. She is at her best when she admits and trades on the fact that she is that small-town cheerleader with a big dream, she is that Riott Squad girl who misses her friends, but she is also a survivor down to fight another day. If Morgan’s singles push continues, hopefully WWE will spare the contrived plot twists and let Morgan get real: she’s capable of it, and it could push her popularity to new heights.

In 2020, with Kofi Kingston and Xavier Woods sidelined by injury, Big E was holding down the fort for The New Day as a singles competitor during the early days of the Pandemic Era. His singles push was set up with nuanced storytelling, as Big E wavered about breaking out from The New Day and embracing his singles competition ambitions. Big E achieved the Intercontinental Championship for the second time in his career, losing it to Apollo Crews. His singles push didn’t lag in momentum, however, as Big E won the men’s event ladder match at Money in the Bank in 2021, and later cashed in on dominant heel champion Bobby Lashley, attaining the WWE Championship for the first time in his career.

His win was hailed as deserving by both pro wrestling fans and industry insiders and pundits. After being drafted to Raw, challengers amassed around E in the form of Rollins, Owens, and Finn Balor. Rollins quickly neutralized Balor, who is now putting Austin Theory over in a lighthearted feud. Rollins and Owens have formed a loose and mutually beneficial alliance, and eventually, Bobby Lashley violently interjected himself into the storyline, defeating Big E, Owens, and Rollins in separate matches all in one night to earn his place in a fatal four-way for the championship at Day 1.

The memory of the “All Mighty Era” is still fresh, and it didn’t take much for Lashley’s blistering violence, ferocious strength, and cool charisma to steal the show. By comparison, Big E, known in The New Day for his booming voice and Falstaffian playfulness, has been a subdued figure. In trying to give him a champion’s composure and dignity, WWE creative has almost stripped E of the quirks that have made him so popular for over a decade. New Japan Pro-Wrestling fumbled similarly with Kota Ibushi, creating a new, unified belt and enshrining it with overstated gravitas upon the “Golden Star”, presenting him as a majestic wrestling demigod and suppressing his innate, high energy eccentricity. WWE has made the same mistake, toning down the wrestler who is literally the voice of the New Day’s exuberant opening sequence.

Both Liv Morgan and Big E have considerable charm, popularity, and history with WWE. Much like AEW’s current world champion, Adam Page, fans have become invested in Morgan’s journey onscreen and off, through social media. She could have a similar championship run as Page is currently enjoying, as a tough-as-nails babyface buoyed by the fans’ feeling that she deserves her spot. That is how Big E’s run started, but instead of allowing his larger-than-life personality to breathe as The Rock’s once did, he has been muted and overshadowed by his more colorful challengers. Both Morgan and E could use less engineering, to allow their personalities and talents to truly shine.