This weekend, Gatoh Move Pro Wrestling will air ChocoPro #183 from the promotion’s official YouTube channel. This promises to be a strong show, featuring two returning guest stars and the interim Super Asia Champion. If you’re looking for some wrestling this weekend, you may wish to tune in and support the show. For those that are regular viewers, it’s safe to assume you know what to expect. Without any further delay, here’s what to expect. 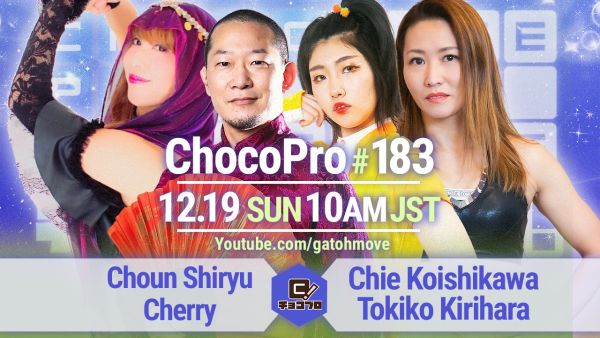 Chon Shiryu and Cherry vs. Chie Koishikawa and Tokiko Kirihara

ChocoPro #183 will begin with a tag team contest pitting Cherry and the aforementioned interim Super Asia Champion, Chon Shiryu, against fourth-generation Gatoh Move stars Chie Koishikawa and Tokiko Kirihara. As a veteran freelance wrestler, Cherry may be best known to joshi puroresu enthusiasts for her continued work in PURE-J, Ice Ribbon, and elsewhere. This wily fortune teller made her last ChocoPro appearance on Episode #174, where she teamed with Antonio Honda in a winning effort against Koishikawa and Masahiro Takanashi. Meanwhile, Episode #183 marks the first Season 11 appearance of Shiryu, who seems to be set on a course to face Minoru Fujita to determine an undisputed Super Asia Champion.

Speaking of wrestlers making their ChocoPro Season 11 debuts, enter Tokiko Kirihara, whose last appearance took place on Episode #180. “Otoki-san” battled Yuna Mizumori in a losing effort, though Kirihara’s presence throughout Season 10 can’t be ignored. Victories over the likes of Sayaka and Baliyan Akki are a testament to how formidable she is. On this episode, she joins forces with “Too Much Energy,” Chie Koishikawa. She has been part of every Season 11 episode thus far; depending on her success moving forward, she may be in line for an Asia Dream Tag Team Championship match alongside her Egg Tarts partner, Hagane Shinnou. Needless to say, a victory is essential for Koishikawa and Kirihara.

Shin Suzuki has become a consistent guest star for ChocoPro since his first appearance back in October. He will make his return on ChocoPro #183 and given that he’s without a victory in Ichigaya Chocolate Square, he will be that much more motivated to win. For the uninitiated, Suzuki is primarily a Pro Wrestling HEAT-UP competitor, though he has worked for other Japanese promotions throughout his career. From Osaka Style Wrestling to Colega Pro Wrestling, this seemingly mild-mannered, spirited competitor is practically tailor-made for Gatoh Move. As mentioned earlier, though, his motivation to win will be nothing short of palpable.

Of the 4 ChocoPro matches Suzuki has competed in, Baliyan Akki has been part of 3. Their lone singles encounter took place on Episode #171, opening the show. This was a competitive encounter that resulted in no clear winner, as they wrestled to a 15-minute draw. One could argue that this was an extension of Akki’s struggles throughout Season 10, as he found it difficult to have his arm raised following his matches. On the surface, though, the self-proclaimed “Ace” of ChocoPro has Suzuki’s number, besting the Pro Wrestling HEAT-UP talent twice in tag team competition. How will their second singles bout unfold?