Heading back to Los Angeles, California is Game Changer Wrestling as the company prepares for GCW Blood on the Hills. We are a little past the midway point of December and it would appear that the independent wrestling powerhouse is throwing everything at fans to make this month among the biggest in company history. This Friday’s show should be no exception since there will be a collection of GCW stalwarts and outside wrestlers alike within the same venue. The action will take place at Ukrainian Culture Center, and when it comes to action, here is what readers should know. 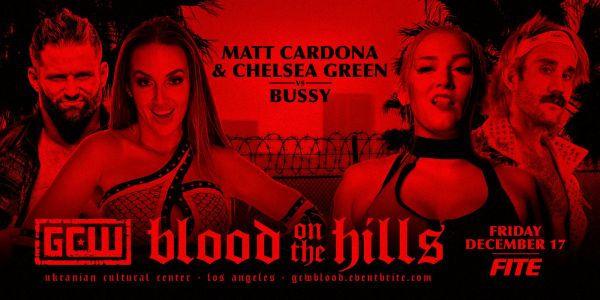 A Grudge Encounter in Los Angeles

GCW Blood on the Hills will also see a grudge tag team encounter with little holiday cheer to spare. Though it can be argued that this stems from Cardona’s first appearance in Game Changer Wrestling, it kicked off proper at this past September’s Get Lost Alot event. Cardona was determined to win back the GCW World Championship he lost earlier that month at The Art of War Games. In response, Brett Lauderdale had Cardona defend the latter’s Internet Championship, which was claimed by EFFY in a match that only lasted half a minute. From there, Cardona’s hatred toward EFFY, and GCW at large, intensified. The tension came to an even higher boil once Allie Katch, EFFY’s other half of BUSSY, and Chelsea Green, Cardona’s real-life fiance, entered the fray.

Green was instrumental in allowing Cardona to regain the Internet title, interfering at this past October’s Fight Club event to do so. Fast forward the following month, at Evil Deeds, and it was evident that BUSSY was determined to get back at the self-proclaimed “Deathmatch King and Queen.” In the fourth match of the night, Katch bested Green in the latter’s GCW in-ring debut. Later in the night, Alex Shelley picked up a victory over Cardona, though it wasn’t without involvement from BUSSY. This Friday, at Blood on the Hills, this grudge between duos will finally be settled. Will Cardona and Green enter their upcoming marriage with a tag team victory under their belt, or will BUSSY put a damper on their impending celebration? 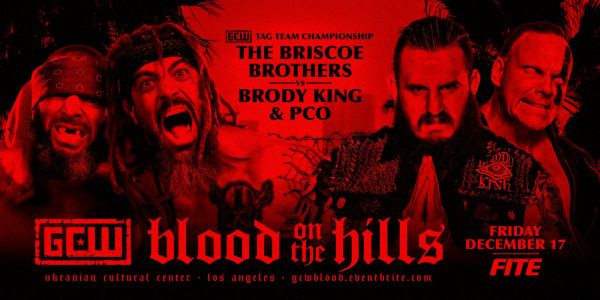 The GCW Tag Team Titles Will Be Defended

Another tag team encounter at GCW Blood on the Hills will see the promotion’s tag team titles defended. The reigning GCW Tag Team Champions, The Briscoe Brothers, won the titles this past October at War Ready, besting Second Gear Crew’s Mance Warner and Matthew Justice. From there, “Dem Boys” went on to successfully defend the titles the following month at ROH Honor for All, this time against SGC’s AJ Gray and EFFY. To say that The Briscoes are an accomplished duo would be an understatement. Jay and Mark have won gold in several organizations, even capturing the ROH World Tag Team Championship a record-setting 11 times. At Blood on the Hills, they defend the GCW tag team titles against two returning stars.

Returning to GCW, at Blood on the Hills, are former ROH stars Brody King and PCO. Both powerhouse wrestlers are accomplished in their own ways, bringing their unique styles together to form a  championship-worthy tandem. King is a tag team specialist, currently holding Pro Wrestling Guerrilla’s World Tag Team Championship alongside All Elite Wrestling’s own Malakai Black. He is also a member of VLNCE UNLTD, meaning that he can be that much more of a team player. Boasting over 30 years of wrestling experience, the Quebec-born PCO has plenty to offer. PCO is a former 3x WWE Tag Team Champion; long-time wrestling fans may remember him during his time as one-half of The Quebecers. In 2019, the Frankenstein’s Monster-esque veteran won the ROH World Championship at 51 years of age. Can King and PCO add more tag team gold to their respective resumes? Tune in this Friday to find out.

For the past number of months, Jordan Oliver and Atticus Cogar have been at odds with one another. Anyone that’s a regular viewer of GCW events will speak to this, and despite Oliver’s cocky demeanor, he’s been more positively received than “Silver Teeth Satan” himself. Oliver may be “Young, Dumb, N Broke,” but he’s also fearless. Meanwhile, Cogar garnered respect for his ability to make matches to the extreme. With that said, his violent personality has gotten in the way of goodwill from others. At GCW So Alive earlier this month, they competed in what many thought would be the blow-off encounter. However, the match itself only lasted for less than 5 minutes before devolving into chaos, no winner being decided. This Friday, a winner must be decided in one of the most hellish match types imaginable.

A No Rope Barbed Wire Match is perhaps the most straightforward match type in existence. In place of traditional ring ropes is barbed wire, which brings an entirely different element to the average wrestling match. In other words, expect neither Oliver nor Cogar to execute springboard maneuvers or use the nonexistent ropes to whip across the ring. Barbed wire pierces the skin, causes bleeding, and slowly eats away at an individual’s physical being. This match will be won by pinfall, submission, or knockout; needless to say, to reach this point, the highest level of punishment must be delivered. For those that intend to tune into GCW Blood on the Hills, be warned that this match isn’t for the faint of heart. This Friday, it’s “Good vs. Evil.”

GCW Blood on the Hills will take place in Los Angeles, California on December 17, 2021.

Stay tuned to the Last Word on Pro Wrestling for more on this and other stories from around the world of wrestling, as they develop. You can always count on LWOPW to be on top of the major news in the wrestling world, as well as to provide you with analysis, previews, videos, interviews, and editorials on the wrestling world. GCW Blood on the Hills is set to air Friday at 8 PM PST on FITE.