The Invasion is considered one of the biggest missed opportunities in professional wrestling and deservedly so. What should have been a storyline pitting the biggest wrestling companies in history, at the time, quickly devolved into a mismatched, ego-filled mess of an angle. Nonetheless, it ended in perhaps the best way it could. At Survivor Series 2001, on November 18, the combined forces of Team WWF bested The Alliance in the main event. To understand the importance of this match, we have to go back to March 23 of that year.

Team WWF vs. The Alliance at Survivor Series 2001

Following various examples of mismanagement and the ever-growing momentum of the World Wrestling Federation, World Championship Wrestling closed its doors in the spring of 2001. The WWF would purchase the rights to WCW, including such assets as trademarks, an expansive video library, and a series of talent contracts. To say that this was huge would be an understatement. For years, Ted Turner and Vince McMahon competed for viewers, the balance of power shifting throughout the years. Though Turner had McMahon the ropes at points, ultimately, it was the latter that emerged supreme.

Though there was a feeling of sadness following WCW’s closure, there was excitement to be felt as well. Throughout the Monday Night Wars, wrestling fans pined for dream matches featuring competitors from both companies. “Stone Cold” Steve Austin vs. Goldberg, The Undertaker vs. Sting, The Rock vs. Diamond Dallas Page – these were just a few examples that fans floated over the years. Despite the aforementioned excitement, expectations weren’t met. This isn’t to say that blame lay solely at the feet of the WWF, as we’ll discuss later.

The Invasion ran from March to November 2001, and during this time, several wrestlers pledged their allegiances and stabbed backs. By the time Survivor Series 2001 arrived, established WWF stars Austin and Kurt Angle were part of the combined forces of WCW and Extreme Championship Wrestling, also known as The Alliance. On the other side of the coin was Vince McMahon’s legion, featuring such names as The Undertaker, Kane, and The Rock. After months of battle, a Winner Take All contest was declared for November 18, 2001. Team WWF vs. The Alliance would become the traditional 5-on-5 Survivor Series contest. The losing brand, whether it was the WWF or The Alliance, would have to disband. 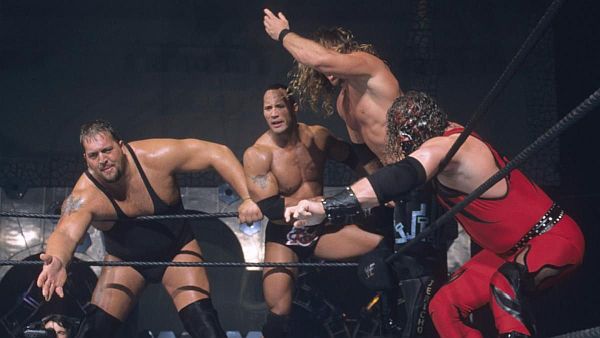 Team WWF vs. The Alliance – The Match

Survivor Series 2001, on November 18, emanated from the Greensboro Coliseum Complex in North Carolina. Throughout the show, a number of important events took place. For instance, in the fourth match, WWF Intercontinental Champion Edge bested WCW United States Champion Test to unify the two titles, eliminating the latter. Furthermore, the WCW Tag Team Championship was merged with the ultimately unified WWF Tag Team Championship when The Dudley Boyz defeated The Hardy Boyz. However, it was the main event that had the attention of all. Survivor Series 2001 concluded with a traditional 5-on-5 match pitting Team WWF (Big Show, Kane, The Undertaker, Chris Jericho, and The Rock) against The Alliance (Shane McMahon, Rob Van Dam, Booker T, Kurt Angle, and Steve Austin)

Big Show, who was personally recruited by Vince McMahon to join Team WWF due to injury, was surprisingly the first one out of the match. This wasn’t for lack of trying, however, as big moves from Booker T, Rob Van Dam, and finally, Shane McMahon put away the giant. However, it wouldn’t be long until the McMahon son found himself on the receiving end of punishing offense from Team WWF’s crew. It was Jericho, the former WCW star that became a household name in the WWF, that put Shane away. Quickly into the match, eliminations were taking place, setting the pace for the rest of the contest.

From there, it was Kane and The Undertaker, The Brothers of Destruction, that were taken out of the match. Despite Kane’s brute strength and “The Dead Man’s” attempts to rally Team WWF, they were no match for The Alliance. From there, The Rock and Jericho stood together as the final two Team WWF members against the four-man group of The Alliance. Keep in mind that, for weeks leading to this point, tension built between “The Great One” and “Y2J,” which begged the question, could they work together to save their company? Once The Rock eliminated Booker T, things seemed to be looking up, especially after Jericho rolled up RVD for a surprise three-count. 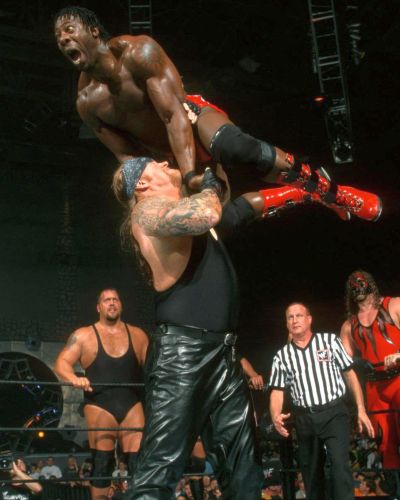 Coming Down to the Wire

From here, it came down to a two-on-two scenario: The Rock and Jericho of Team WWF versus Angle and Austin of The Alliance. Jericho showed tremendous heart, enduring physical punishment from his opponents but refusing to give in. Jericho finally made the tag to The Rock, who took it to Angle and Austin alike. The Rock cinched in the sharpshooter on the Olympic gold medalist, causing him to submit. Austin became the sole member of The Alliance and it appeared that the odds finally returned to the favor of Team WWF. That was, however, until Austin blocked a Lionsault attempt by Jericho, getting the knees up before eventually rolling up the young star for the surprise pinfall. Irate, Jericho attacked The Rock before leaving the ring, the crowd in attendance raining down on him with a cascade of boos.

The Undertaker didn’t take kindly to this either, as he returned from the backstage area to confront Jericho. As they went to the back, The Rock and Austin faced off as the final two men for their respective teams. For longtime wrestling fans, this was another chapter in a historic rivalry. The Rock applied several Sharpshooter attempts while Austin seemed to use every underhanded advantage he could, even bringing the WWF title into the mix. As if this wasn’t enough, the officials stood off, as WCW referee Nick Patrick attempted to stop WWF referee Earl Hebner from calling the match. The stakes were so high that even non-competitors became involved.

The match approached its conclusion as all officials were incapacitated. During this, Angle sneaked back into the ring, shocking the world by hitting Austin, his own partner, with the WWF title. From there, Austin was subject to a Rock Bottom. The Rock covered Austin and Hebner, who finally came to, made the slow three-count. Team WWF had won. As the WWF Superstars celebrated in their locker room, The Rock standing tall and Vince McMahon celebrating from the stage, Stephanie McMahon-Helmsley and the rest of The Alliance reacted in utter shock. Though this wouldn’t be the final McMahon Family feud, the Survivor Series 2001 main event marked the end of The Invasion.

The Aftermath of Survivor Series 2001

With The Alliance’s loss at Survivor Series, The Invasion storyline officially came to an end. If it didn’t feel like the storyline was a wasted opportunity while it was ongoing, this became painfully evident in the follow-up. During the months that followed, the WWF brought in such names as Ric Flair, Kevin Nash, Scott Hall, and Hulk Hogan, all of whom would have been critical in making The Invasion more meaningful. While this may seem like creative oversight on the surface, the reality is that certain wrestlers were unobtainable at the time.

Case and point, 5x WCW Cruiserweight Champion Rey Mysterio Jr. was absent during The Invasion. He was tied to his contract, thus legally unable to sign with the WWF until his contract ran out; ultimately, Mysterio would sign with them in the summer of 2002. Other top WCW stars, including Kevin Nash, opted to sit at home and wait out their contracts. Booker T, who was a 4x WCW World Heavyweight Champion when he arrived in the WWF, started working for the rival organization immediately, as did Diamond Dallas Page. Unfortunately, their star power wasn’t enough to help elevate the status of The Alliance.

This isn’t to say that certain members of The Alliance didn’t go on to see success while under the employ of Vince McMahon. Chavo Guerrero Jr., for example, became an accomplished tag team and singles wrestler, winning multiple titles until his departure in June 2011. Rob Van Dam, who was arguably the group’s breakout star, won multiple Intercontinental titles, Tag Team titles, and the WWE title. Though it can be argued that certain names weren’t given the opportunities they deserved, examples such as these showed that the cream was, at times, able to rise to the top.

Team WWF vs. The Alliance – In Closing

As mentioned near the beginning of this piece, The Invasion is often considered one of the biggest missed opportunities in wrestling. Many of the dream matches and scenarios fans concocted didn’t come to pass and when in-demand wrestlers eventually signed with the World Wrestling Federation, it felt like too little too late. Nonetheless, from a match standpoint, the final battle between Team WWF and The Alliance at Survivor Series 2001 was a fitting one. It was an incredibly competitive match that spelled the end of a story that could have been so much more.