In a rare instance, Gatoh Move Pro Wrestling will be holding a Japanese evening – or North American morning, depending on your longitude – edition of ChocoPro. This episode will come off the heels of All Elite Wrestling’s Full Gear event, so for those that need just a little more wrestling during the weekend, look no further. The following card includes the return of a Pro Wrestling HEAT-UP talent taking on one-half of the Asia Dream Tag Team Champions in the main event. Let’s run down all the action set for ChocoPro #174. 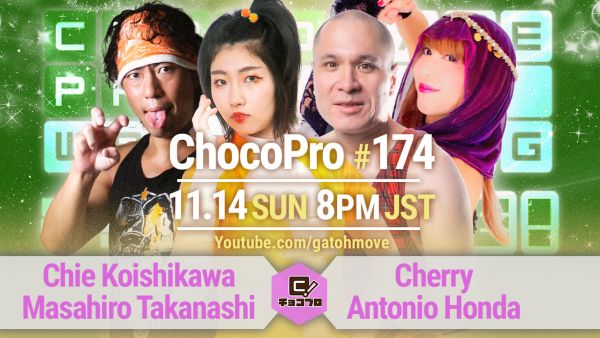 Chie Koishikawa and Masahiro Takanashi vs. Cherry and Antonio Honda

To begin, Chie Koishikawa will team with Masahiro Takanashi to take on the veteran duo of Cherry and Antonio Honda. Koishikawa and Takanashi are no strangers to one another, both in singles and tag team competition. They last teamed up on Episode #161 back in October, when they lost to Best Bros. On paper, the energetic nature of “Chiezo” and the experienced mindset of Gatoh Move’s “Drunken King” should make for an interesting tandem. Perhaps this combination will be enough to see Koishikawa and Takanashi to a victory. For this to be a reality, however, they must overcome a formidable pair of veterans.

Anyone that watches DDT Pro-Wrestling on a regular basis knows what Antonio Honda is all about. His comedic antics are a collective mask, as he’s been able to emerge victorious in Ichigaya Chocolate Square time and time again. Furthermore, he enters this show as one-fourth of DDT’s KO-D 8-Man Tag Team Champions. Meanwhile, Cherry – not to be confused with the former Deuce ‘n Domino valet of the same name of WWE fame – has been less fortunate. Earlier this month, at PURE-J’s Pure Dream 5th Anniversary event, Cherry and Leon lost the Daily Sports Tag Team Championship, ending their reign at 74 days. Alongside Honda, can Cherry rebound with a victory? 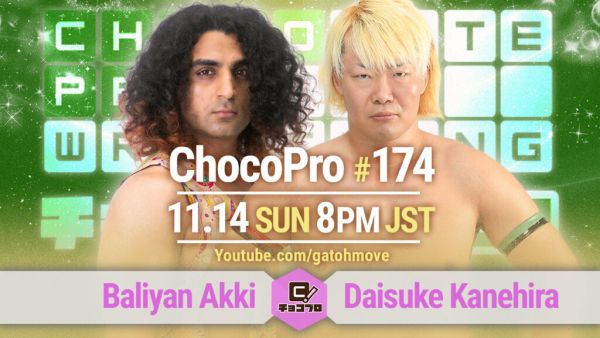 In the main event of ChocoPro #174, Baliyan Akki, one of the Asia Dream tag team titleholders, takes on Daisuke Kanehira of Pro Wrestling HEAT-UP. Though Mei Suruga is still in America for the time being, working alongside fellow ChocoPro stalwarts Lulu Pencil and Emi Sakura in AEW, Akki continues to hold the Asia Dream Tag Team Championship with pride. Being without his tag team partner hasn’t slowed his momentum much, either. In addition to competing for the Super Asia Championship, the self-proclaimed “Ace” of ChocoPro has picked up victories over such names as Gatoh Move’s Sayaka Obihiro and DDT’s Shota. On this show, he faces his next challenge in Daisuke Kanehira.

To say that Kanehira is a formidable competitor would be an understatement. He’s incredibly decorated in his home promotion, being a former HEAT-Up Universal Champion and 3x HEAT-UP Universal Tag Team Champion. In addition to being an accomplished wrestler, he boasts a mixed martial arts background, making him that much more dangerous from bell to bell. Keep in mind that this is only his second ChocoPro appearance. Kanehira first appeared on Episode #101, which saw Gatoh Move collaborate with HEAT-UP. In the second match of the show, he picked up a victory over fellow HEAT-UP star SHINGO. Can Kanehira pick up his second ChocoPro win over a game Akki?