Pro wrestling is a very old, very flexible form of art. The dichotomy of the hero and the villain is what every story can be boiled down to. But as with any form of storytelling, the heroes and villains we get are wide and varied in style. Heels especially have a lot of flexibility with their characters, as there is no shortage of ways to get a crowd of people to dislike you. One such way is through fear and intimidation. With Halloween mere weeks away, we will be going over some examples of wrestling characters whose characters are rooted in using such fear and intimidation. This week, for our first entry we will be looking at the Samoan Bulldozer, the late great Umaga, AKA Eddie Fatu.

Beginning of the Bulldozer

In December of 2005, Eddie Fatu had re-signed with the WWE after 2 years of being away from the company. After being released from the company in June of 2003 during a run as Jamal of the faction 3 Minute Warning, he rounded himself more as an in-ring performer in All Japan Pro Wrestling. After a lengthy stay of about 2 years, he came back to WWE as Umaga, a monstrous Samoan who cared little for the welfare of his mostly smaller opponents. Debuting on April 3, 2006 with manager Armando Alejandro Estrada, Umaga immediately set his sights upon 16x world champion Ric Flair, setting up a match between the two at the upcoming Backlash pay-per-view.

Umaga would win in convincing fashion, defeating the former world champion in less than 4 minutes. It was clear from the get-go that big things were in store for the 350- pound Samoan. It wasn’t long before he started going over established, main event level acts on TV and PPV, including Triple H, Shawn Michaels, and even then WWE Champion and company poster boy John Cena, all whilst maintaining an undefeated streak in singles competition. The sky was seemingly the limit for the beast, and the company was clearly quite high on the idea of him as a top act.

Having not been pinned for nearly a year, Umaga was dubbed the number one contender for John Cena’s WWE Championship in January of 2007. The match was set for New Years Revolution. The match ended in surprising fashion, with Cena sneaking a victory via school-boy roll-up to retain his championship, effectively breaking the undefeated streak of Umaga. It was a shocking moment for fans; it was the first time Umaga had ever been pinned before, but it was also the first time Cena had ever had to resort to desperate tactics in order to beat someone during his run at the top. The matter was still clearly very undecided, however, and a rematch was soon set for Royal Rumble at the end of the month, under Last Man Standing rules.

Cena was going into the match with a worked spleen injury, having been ambushed by Umaga and nailed with a devastating Samoan Backdrop on an episode of Monday Night Raw between the two PPVs. After an epic 20+ minute war between the hero and the monster, a bleeding and beaten John Cena managed to slay the beast, using a ring-rope assisted STF to choke Umaga out, forcing him down for a count of 10 and retaining his WWE Championship in the process. Unfortunately, this would be the only time Umaga would truly challenge for the title in such a fashion, but it is almost inarguably the peak of his career, both in-ring and character-wise. 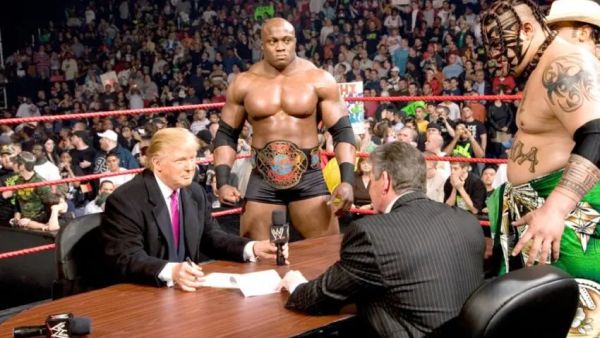 Battle of the Billionaires

Upon exiting the program with John Cena, Umaga was then put in a rather interesting position for that year’s upcoming WrestleMania. Donald Trump was set to be part of a huge celebrity angle; a Hair vs Hair match against Vince McMahon with both men choosing surrogate wrestlers to represent them. Donald Trump chose then-ECW Champion Bobby Lashley, while Vince McMahon chose Intercontinental Champion Umaga, a title he had just recently won off of Jeff Hardy on February 19. The program was an interesting one, to say the least. While the program can certainly be thanked for a good portion of the PPVs 1.3 million buys, it’s hard to say whether it really did anything to help or hinder the position of either wrestler.

The true stars of the program were Donald Trump and Vince McMahon; the wrestlers were only there to serve in place of them. That being said, both men put their all into their work with each other. Lashley had not been on the main roster for very long and was being built up for a position he most likely was not ready for, and Umaga was facing personal issues of his own that had kept him from winning the WWE Championship. And yet they had many angles with each other that did very well, one of which was the debut of long-time WWE employee Santino Marella as a random fan from the crowd during an episode of RAW, which ended with Santino winning the Intercontinental title from Umaga due to interference from Lashley.

In the end, Lashley won the program, leading to Vince McMahon getting his head shaved. The two’s program would linger for an extra month into the Backlash PPV, but ultimately was done. 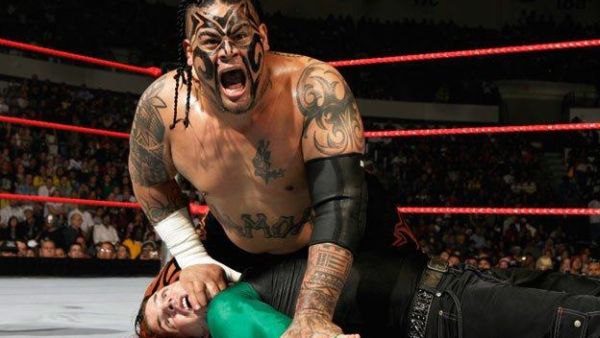 Devouring the Midcard and Finding the Perfect Opponent

By the summer of 2007, there wasn’t a lot left for Umaga to do. He ended up chasing the Intercontinental Championship again, taking it back from Santino Marella on the July 2nd episode of that year’s Raw. After this he was left as king of the midcard on Raw, and was introduced to a new opponent that he’d not yet tangled with; Jeff Hardy. Hardy was the perfect opponent for Umaga. The perfect likable underdog to Fatu’s terrifying monster.

Giving up a good 150 pounds to the man, Hardy was once again the perfect David in a David versus Goliath story. In matches, he would allow Umaga to utterly destroy him, bumping to and fro and being thrown all around the ring. It made for believable and captivating in-ring action every time the 2 would meet and giving them chemistry they didn’t have with almost anyone else on the roster. The feud they would have would take place on and off for about two months, having multiple highly praised matches together, including a Falls Count Anywhere match at One Night Stand of that year, which ended with Hardy nailing a Swanton Bomb off the top of a production truck to put the monster away.

The feud between them would end on the September 3rd episode of Monday Night Raw, where Hardy would defeat Umaga once and for all to win the Intercontinental Championship from him.

What Made Umaga Scary?

In the end, what made Umaga so scary as a wrestler wasn’t just his size, but the ferocity of his offense. Everything he did looked violent and wild, yet never entirely uncontrolled. His kicks were never pretty, but always expertly placed. Sometimes he’d hit a Samoan Drop so fast that the person receiving it would land on their head or neck instead of flat on their back. The Samoan Bulldozer hip attack in the corner was an absolutely devastating maneuver that looked like it could decapitate someone, and his top rope splash, while perfectly safe to take (as long as you were on Fatu’s good side) looked like it would pancake a normal human being.

Fatu also worked perfectly in the role, clearly having put his all into it. His facial expressions and primal screams, like a wildman, were enough to put fear in any man. It also doesn’t hurt that he defeated 3 former world champions in his first year as the character, including the world champion at the time, making him an instantly dominant force. Children watching at the time lived in fear of him dethroning their heroes John Cena or Jeff Hardy, making him an incredibly effective heel if only for a short time. Unfortunately, Fatu’s career would be cut short when he passed away in late 2009 after being released from the company. But his run cemented him as one of the scariest characters in the company at his time, and a prime example of how one can utilize fear as heat.