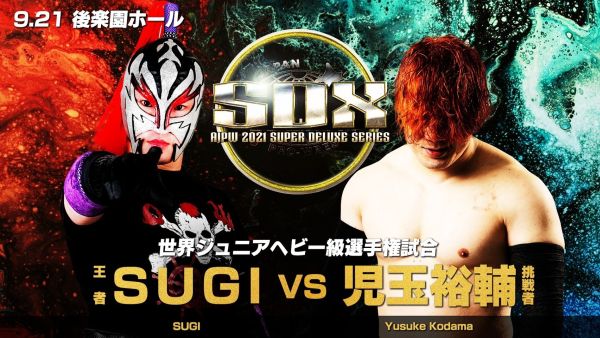 Since the middle of the year, SUGI has taken the AJPW junior heavyweight division by storm. He became its top star, holding the AJPW World Junior Heavyweight Championship. His title reign, over the past two months, is much longer than any others in 2021. For SUGI’s next challenge, he must face off against one of Wrestle-1‘s best juniors/cruiserweights: Yusuke Kodama. Yusuke Kodama is a former 2x Cruiserweight Champion of Wrestle-1 but has primarily been uninvolved in the junior action since his debut in AJPW in April of last year.

Since Kodama’s debut for All Japan Pro Wrestling, his only major success has been in the trios division. With this upcoming match being a surprise for some, it will be a proving point for him to reignite the fire he had years ago. For SUGI, it would mark his third title defense. For Kodama, it would mark his first-ever single championship win in All Japan Pro Wrestling. If we were to call this match, it would be SUGI retaining. 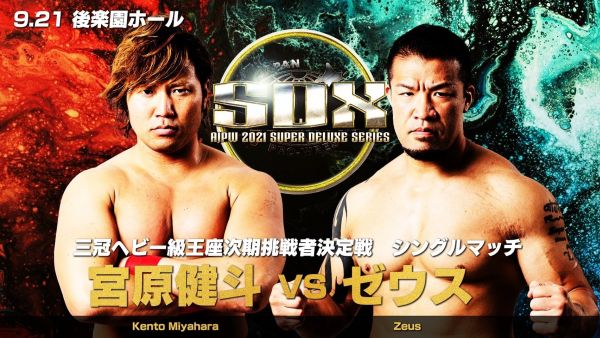 In our semi-final match of the evening, we have a special singles bout between Zeus and Kento Miyahara. Both men have been driving forces in their tag divisions, with Miyahara being the former AJPW World Tag Team Champion and Zeus a former All Asia Tag Team Champion. Both men lost their championships earlier on in this tour, which opened their schedules. At a recent show, Miyahara expressed his intentions for the Triple Crown Championship, a belt he lost in both March of 2020 and June of 2021. Zeus would later come out and challenge Miyahara to a special singles match. This led us to this upcoming #1 Contender’s Match for the Triple Crown Heavyweight Championship.

Kento Miyahara and Zeus maintain a varied match history. In tournaments, Zeus defeated Miyahara to win the Champion Carnival in 2020 and lost in Royal Road 2019 semi-finals. In terms of championship history, Zeus defeated Miyahara for the Triple Crown Championship, while eventually losing it back to Miyahara. If we were to call this match, it would be a win for Kento Miyahara. It feels like it’s destined to be him since the title was vacated to get it back in a championship bout against either Suwama or Jake Lee. Zeus winning would present an unlikely scenario and it may be a major upset for some. Consider that Zeus holds a victory over Suwama from this year’s Champion Carnival. 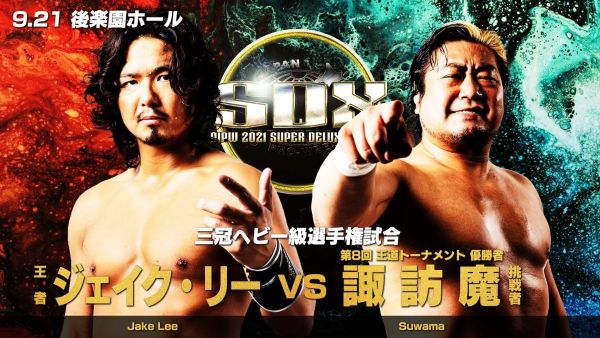 It’s a match five months in the making and it’s for the top prize in All Japan Pro Wrestling. Jake Lee would turn on his faction JIN in February of 2021, starting a brand new faction with the remnants of Enfant Terribles; this led to the genesis of Total Eclipse. Lee would go into Champion Carnival, winning the tournament to gain an opportunity against a man he lost in the tournament: Suwama. Suwama was supposed to defend against Lee at the first Champions Night show. However, Suwama would relinquish the championship due to contracting COVID-19. Ever since vacating the championship, Total Eclipse’s leader, Jake Lee, has been focused on unfinished business, defeating Shotaro Ashino to retain his championship in the early days of his reign.

While Suwama has been building himself up in the heavyweight division, most notably winning the Royal Road 2021 tournament, where he gained his opportunity for this title match. Suwama is looking to get back a championship he didn’t rightfully lose, while this is the most important title defense for Jake Lee yet. Lee has been successful since April and remained a defending champion. Now, he faces an “Ace” in Suwama. Suwama held the Triple Crown Heavyweight Championship multiple times. He also has two additional wins over Lee. The current win-loss record between them is 4-2 in favor of Suwama.

If we were to call this match, it could go either way. It’s an exceedingly hard match to call in that regard. One must also consider the importance of the upcoming second edition of Champions Night; it was here where the winner of our previous bout will challenge the winner of this bout. With that said, we predict Jake Lee retaining. For Lee, this match is about unfinished business and establishing himself as the top star of All Japan Pro Wrestling, all the while beating one of the “Aces” of the company. For Suwama, it’s about finally getting back what was never rightfully taken from him. It’s one of the most important matches in AJPW history and it happens at the conclusion of the AJPW Super Deluxe Series 2021.