For the first time, in over a month, Game Changer Wrestling is slated to return to Los Angeles, California. The last time that GCW was in the LA area was No Signal in the Hills, which was highlighted by Dark Sheik battling Nick Gage in the main event. GCW Highest in the Room should be a promising return to the area, based on the announced card, competitors and matches included. If you reside in the area, are planning on making the trip, or would like to watch from the comfort of your home, rest assured that you will be able to catch all the action. Without any further delay, let’s get into the action. 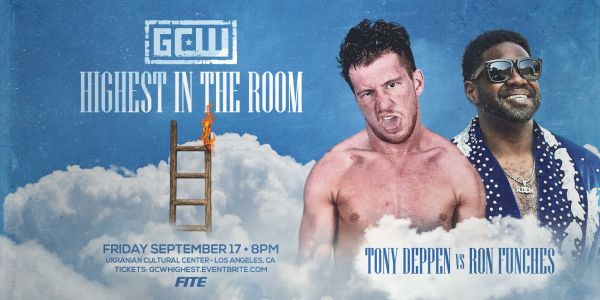 At GCW The Art of War Games, with the help of a well-timed “Snot Rocket,” Tony Deppen picked up a single over Allie Katch. Following his victory, Deppen took to the mic. The former Ring of Honor World Television Champion addressed actor and comedian Ron Funches, who was providing commentary. Deppen didn’t take kindly to Funches’s past comments about him online and on Busted Open. As Funches confronted him in the ring, Deppen slapped the comedian across the face, eliciting jeers from the fans in attendance. Though not a wrestler, Funches stood his ground, tackling Deppen to the mat before a brawl ensued. It took several members of the GCW ring crew to break up the altercation. Though the brawl subsided, it became evident that this wouldn’t be their final encounter.

At GCW Highest in the Room, Ron Funches and Tony Deppen will settle their differences in singles competition. Anyone familiar with independent wrestling knows about Deppen’s capabilities. Despite his arrogant and brash exterior, he developed a reputation as one of the best in-ring performers in recent memory. From GCW to ROH and beyond, it’s easy to see why he has the reputation he does. Needless to say, Funches is the wildcard. He has been in pro wrestling as a commentator, as mentioned earlier, and a ring announcer. That said, Funches is unproven from bell to bell. Highest in the Room won’t be a platform for the Los Angeles-born entertainer to ply his in-ring craft. Rather, it will be a platform for him to exact revenge against one of the most seasoned grapplers in the game today. 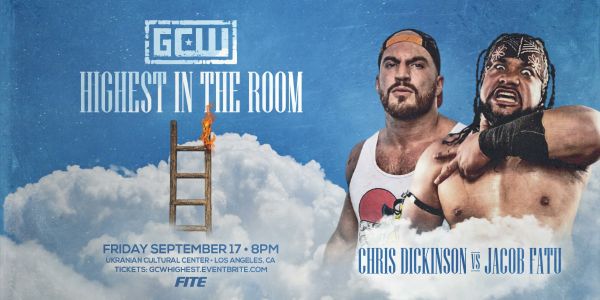 The first match announced for GCW Highest in the Room also marks a first-time encounter between two powerful, explosive wrestlers. On one side of the equation exists Chris Dickinson, “The Dirty Daddy” from Staten Island, New York. If you aren’t familiar with Dickinson’s work in GCW, which is incredibly extensive, perhaps you’ll know him from Ring of Honor and New Japan-Pro Wrestling. In the former promotion, he is a member of VLNCE UNLTD, not to mention one-half of the current reigning ROH World Tag Team Champions alongside Homicide. They won the titles two months ago at ROH Best in the World, further solidifying VLNCE UNLTD as one of the promotion’s premier factions. Dickinson more than holds his own solo, however, which will be crucial as he heads into GCW Highest in the Room.

This Friday, Dickinson’s opponent comes in the form of Major League Wrestling‘s reigning World Heavyweight Champion, Jacob Fatu. “The Samoan Werewolf’s” title reign, which is the longest in said title’s history, recently surpassed 800 days. From fellow power-based wrestlers including Calvin Tankman and Davey Boy Smith Jr. to faster-paced opponents such as Brian Pillman Jr. and ACH, Fatu has successfully defended his title against all comers. Fatu’s no stranger to GCW, either; this past December, he debuted for the promotion at Slime Season, where he picked up a dominant win over one-half of the current GCW Tag Team Champions, Matthew Justice. Highest in the Room marks Fatu’s first GCW appearance this year. It’s also fair to say that he has his work cut out for him. Who will emerge victorious in this first-time singles bout? 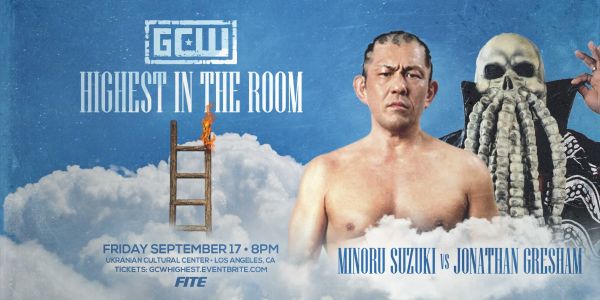 If there’s any one attraction that will sell skeptics on GCW Highest in the Room, it’s the return of Minoru Suzuki. To say that he’s a Japanese wrestling legend would be an understatement. Blending grounded offense with punishing strikes and unforgiving submission techniques, Suzuki takes glee in inflicting pain on his opponents. This approach has made him successful in various promotions including, but not limited to, All Japan Pro Wrestling, Pro Wrestling NOAH, and New Japan Pro-Wrestling. In the latter promotion, he is a former IWGP Tag Team Champion, IWGP Intercontinental Champion, and 2x NEVER Openweight Champion. Even in his mid-50s, Suzuki not only wrestles at a high level but can easily intimidate with a stare. It’s been well over 2 years since Suzuki has stepped into a GCW event, his last being Josh Barnett’s Bloodsport in April of 2019; it was here where he fought Barnett himself to a 25-minute draw. Making his return to GCW, Suzuki will step up to a young, hungry challenge in the form of Jonathan Gresham.

Considered the heart and soul of Ring of Honor’s Pure Division, Jonathan Gresham lives up to his reputation. As a former ROH Pure Champion, in a reign that lasted 317 days, Gresham has proudly defended his title against all comers. These have included Rhett Titus, Fred Yehi, and fellow member of The Foundation, Jay Lethal. Gresham has also found himself in the thick of things in terms of faction warfare; regular viewers of ROH programming have seen The Foundation go to war with VLNCE UNLTD and La Faccion Ingobernable on multiple occasions. At Highest in the Room on Friday, however, “The Octopus” will be fighting alone. To battle Suzuki would be considered an honor; to survive Suzuki will be a challenge. Can Gresham spoil the elder Suzuki’s return? Will it be the face of ROH’s Pure Division that encounters a challenge he can’t overcome? Tune in this Friday to find out.

GCW Highest in the Room will take place in Los Angeles, California on September 17, 2021.

Stay tuned to the Last Word on Pro Wrestling for more on this and other stories from around the world of wrestling, as they develop. You can always count on LWOPW to be on top of the major news in the wrestling world, as well as to provide you with analysis, previews, videos, interviews, and editorials on the wrestling world. GCW Highest in the Room is set to air Friday at 11 PM EST on FITE.