The first-ever New Japan Pro Wrestling (NJPW) event, Resurgence, has come and gone and it was a special night. Live in California, it was a huge opportunity for NJPW to give a live show for the first time in the United States since New Beginning in USA in early-2020. With two massive title matches set as the double main event, it surely was a show that delivered. Here are the NJPW Resurgence results along with some in-depth match analysis for the double main event.

The popularity of Jay White in the United States has to be discussed before even getting into this match. His entire run in NJPW has seen him as a heel. For some, the very best in all of wrestling. But when he steps into the United States, he is the favorite of the fans at all times. David Finlay, despite the underdog role, had an uphill battle from the start. Rather than trying to get the fans back on his side, he embraced it and was far more aggressive than you would expect from him. The NEVER Openweight Championship was up for grabs in a rematch from the New Japan Cup earlier this year. Seeing that the last time these two faced off saw David Finlay walk out victorious, anything could have truly happened, making it that more intriguing.

With roles reversed, these two still played into the methodical pacing of many Jay White matches. And for a lot of the first half, it was Finlay who had much of the offense over the champion from beginning to end felt like the antagonist of this one and it led to the crowd eating it up.

At times during the match, White felt as though he had fewer answers than you’d expect from him. After all, no Gedo or Bullet Club in his corner made for an interesting situation for him overall. He was the one fighting back but couldn’t always play it clean to get ahead. White couldn’t sway from his usual ways forever as a low blow with the referee’s back turned made for a change in the match. Finlay would manage to match it as White became fed up with the referee, hitting a low blow of his own.

The final stretch would be one of great beauty as they would hit one another with big move after big move before reversing the Acid Drop into the Blade Runner for the victory. As he always does, White wrestled his style match, even from behind, and showed as to why he’s the first-ever Grand Slam Champion in NJPW history. Simply put, this was really good. 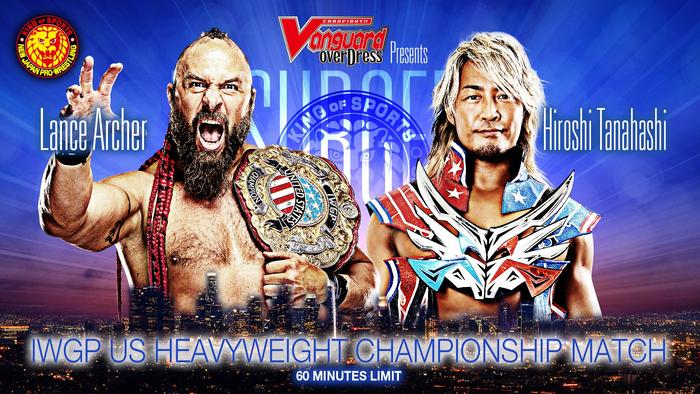 Decimation and survival. That was the theme of Lance Archer versus Hiroshi Tanahashi at Resurgence. Almost the entire match saw the “Ace” fighting back against “The Murderhawk Monster” and it made for some emotional viewing. Archer was having his way time and time again with Tanahashi, showing that there seemingly was no chance for the most decorated champion in NJPW history. Shocking, but it all worked perfectly. At one point in this match, Archer would hit the Blackout on Tanahashi, who was just able to get his foot on the bottom rope to break the pinfall.

After this, Tanahashi managed to get back into the fight, trading shots with Archer and getting more offense in a minute than he had all match long. The resilience and survival of Tanahashi are what would cost Archer his championship as it was a perfect chance for Tanahashi to take advantage as he has done for years now in title matches. The angering of the monster only made it easier for Tanahashi to run that emotion into offense for himself. A Slingblade here, a Slingblade there, and the champion was tumbling and lost. We’d get to the closing of the match when the challenger was able to fight off Archer on the top rope.

This allowed the “Ace” to hit a High Fly Flow on the standing Archer before following it up with one to the back of the champion and eventually a traditional High Fly Flow to end it. Tanahashi got the pin and was rightfully crowned the champion. Not only was it magical in every sense as Tanahashi made more history, but it was one of those unique matchups that you rarely see Tanahashi in. There are not often monsters who can decimate a legend like him, so the craftiness of this one made for a perfect main event.