Pro Wrestling NOAH presents KAWASAKI GO 2021. This has become a yearly event largely advertised by Kawasaki native Hajime Ohara. The show has changed repeatedly due to COVID protocols. Here is the final card and a few highlights to expect.. 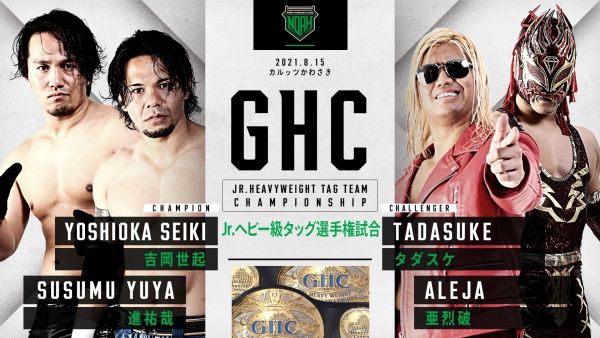 For a while, Tadasuke teased that he was bringing a new Kongo junior to NOAH. This eventually lead to the arrival of Aleja, who immediately made an impact for Kongo. They won the junior unit tournament, and Aleja even got a pin over Seiki Yoshioka in Korakuen Hall. This prompted Tadasuke to challenge the GHC Junior Heavyweight Tag Team Champions. Tadasuke poked fun at them, claiming he didn’t know which one was Susumu and which one was Yoshioka.

The title match was set. However, Kongo didn’t run away with the momentum for this match. STINGER got their win back over Kongo with Susumu and Yoshioka reasserting their dominance. Tadasuke recently failed a junior tag challenge with Haoh. Is Aleja the right partner for Tadasuke, or will Susumu and Yoshioka get their first successful defense?

For months, Kendo Kashin has set his sights on King Tany. Though Kashin has harassed various members of Funky Express, Tany has been the main target. Kashin shouted ridiculous things at Tany, asking him where the queen was. Tany let him know there is no queen and that there’s never been a queen. This feud looks to finally come to a conclusion at this event. This stemmed from a King Tany press conference, where made his intentions loud and clear.

Kazunari Murakami was scheduled to be in this year’s N-1 Victory. However, due to surgery, he will be out of the tournament. This left an open spot, which King Tany tried to claim. Kendo Kashin also stated his claim for that spot before the two men argued. NOAH’s President, Sanshiro Takagi, decided that they should settle the grudge in a match where the winners enter the tournament. Will King Tany be closure to his dreams of the GHC Heavyweight Championship, or will Kendo Kashin ruin all of his plans? 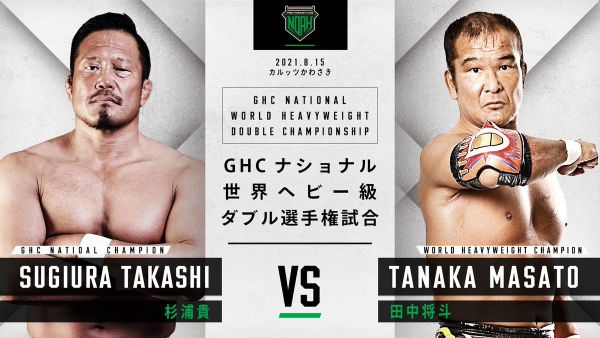 The big attraction for this show is a match for both the GHC National and ZERO1 World Championships. This match was made after Masato Tanaka beat Takashi Sugiura and threw out the challenge. Masato told Sugiura he would put up his ZERO1 World Heavyweight Championship if Sugiura put up the GHC National Championship. Sugiura accepted, but these two have a deeper history than just another title match. This history can be traced back to a stable called Dangan Yankees.

Sugiura and Tanaka would compete under the Dangan Yankees banner and find great success. They won the ZERO1 Furinkazan tournament in 2014 and the NWA Intercontinental Tag Team Championship in ZERO1. In NOAH, they held the GHC Tag Team Championship and won both the 2014 and 2015 Global Tag League. They even stirred up some chaos when Tanaka joined the M’s Alliance, and Sugiura asked why he didn’t join the Sugiura Army. Tanaka responded by saying he was never asked. Both men have agreed on no time limit because they don’t want to lose to one another. However, one will have to lose, and the other will leave with two championships.