Last Word on Pro Wrestling’s series, War of the Words, explores the art and impact of the promo by looking back through the archives. This series will examine all kinds of promos, from the most memorable or ones that have been overlooked and are underrated, showing the background of the promo, the promo itself, the aftermath of the promo, and what came from it. Today, we take a look back at the February 8, 2007 edition of Monday Night Raw, which saw Ric Flair cut an infamous promo on Carlito.

Bleach blonde hair, colorful robes, a bombastic personality – these are just a few of the attributes one would associate with “The Nature Boy” Ric Flair. Recognized by World Wrestling Entertainment as a 16x world titleholder, Flair’s list of accomplishments speaks for itself. However, during the mid-to-late 2000s, it would appear that the once confident styling, profiling, limousine-riding, jet-flying, kiss-stealing, wheeling and dealing son of a gun was in a professional slump. This would eventually lead to one of his best, and perhaps underrated, promos in his career when he laced into Carlito.

By this point, Ric Flair was slowly winding down his career. The years prior were especially active for “The Nature Boy,” as he did everything from feud with former ally Triple H to win his only Intercontinental Championship from ironically enough, Carlito. As Carlito transitioned into a babyface role, Flair’s position in the pecking order regressed. On the February 8, 2007 episode of Monday Night Raw, as they were leaving the venue, Carlito and on-screen girlfriend Torrie Wilson walked past Flair. Not only did Flair ask where they were going but demanded to know why they weren’t staying to watch the show. It was Carlito’s dismissive response that set off the emotional “Nature Boy,” sparking a Ric Flair promo that’s still talked about today.

The Ric Flair Promo On Carlito

“It’s cool? You realize there’s a triple threat main event match going on tonight, live on Raw, to see who goes to WrestleMania? You’re telling me it’s cool, you’re leaving? You’re not going to stay and watch the show?”

Once again, Carlito responded dismissively, stating that he shouldn’t care since he wasn’t in the main event. This only intensified Flair’s demeanor. As Flair laced into Carlito, the latter’s laidback attitude changed, knowing the situation had quickly become hostile.

“I’ll tell you what my problem is: guys like you that have no passion, no guts! You want all the money you want all the glory, you want to fly first class, you want to walk around with someone like her [Wilson], you don’t deserve it! You haven’t worked for it, you haven’t bled, sweat, and paid the price to be here. That’s what’s driving me crazy. I’m walking these halls, trying to find out why guys like you are taking my spot!”

Though the last line may seem like a standard clash of generations, it’s important to note Flair’s position in the company at this time. He was without Evolution, as the group dissolved in 2005. More so, by this point, he was 58 years old and his in-ring career was slowly coming to an end. One could argue that this was the disposition of a man whose time in the limelight was approaching its conclusion and he didn’t believe there were many young stars ready to step up when he eventually bowed out.

“I’ve been here forever and I’m going to work my ass off to stay here! McMahon told me today if I want to stay, I got to prove it to him. You want to stay, you got to prove it to yourself! It’s not cool, it’s pathetic… It’s pathetic! I’m walking around, trying to figure out what my name is, and you’re leaving before the main event? Yeah, me! Sometimes I walk around, trying to figure out who I am and the whole f***ing world knows who I am. Except me sometimes, and you’re leaving?!”

Following this one-sided verbal assault, Flair stormed off, leaving a conflicted Carlito behind. The line about Vince McMahon is especially noteworthy, especially since he wasn’t involved in an on-screen feud with the WWE Chairman at this point.

In an interview with talkSPORT back in December of 2020, Ric Flair revealed that he had been spoken to by McMahon minutes before the promo took place. “Vince chewed my ass out and told me I needed to lead by example,” said Flair. He also noted that, upon returning to the locker room, Bruce Prichard approached him with the promo. As many fans speculated during the years prior to this interview, said promo was cut without a script.

Flair also put pressure on himself, which didn’t help matters from a personal standpoint. During this period, the outwardly confident “Nature Boy” suffered from self-confidence issues. He revealed to talkSPORTS, “I wasn’t even ready. They kept putting me in these situations. It wasn’t to rib me, but he [McMahon] wouldn’t settle for me being any less than I could be.” He revealed that in high-pressure situations, such as main event matches or programs, the aforementioned self-confident issues became prevalent.

Prichard himself provided further insight on Episode 122 of Something to Wrestle. According to Prichard, the consensus among WWE higher-ups was that Carlito wasn’t motivated. With that said, Prichard noted that Carlito worked well with Flair, who was reluctant to cut the promo. This led to a program, heading into 2007, where a more motivated Carlito began teaming with Flair. This pairing was short-lived, as Carlito turned on Flair that April, their feud culminating at Judgment Day the month after; it was here where Flair bested his younger adversary. 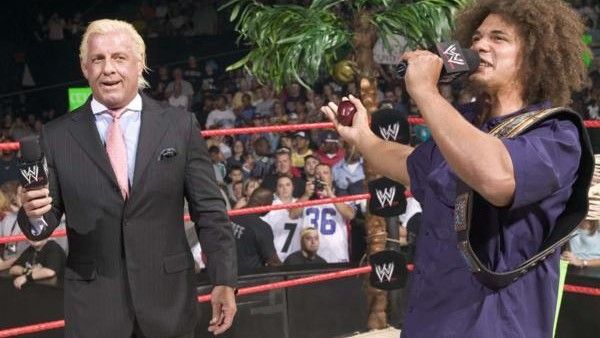 Carlito’s WWE career didn’t immediately pick up following his feud with Flair. Though he requested his release in 2007, Carlito stayed with WWE through to May of 2010. Before then, in 2008, Carlito saw new momentum alongside real-life brother Primo. Together, as The Colóns, they held the World and WWE Tag Team titles at the same time; they became the first team in company history to accomplish said feat. Following the team’s break-up, Carlito’s next notable program was as one of eight WWE Pros in Season One of WWE NXT. He coached Michael Tarver, who was one of the first 3 participants eliminated; the other 2 were Skip Sheffield, better known to wrestling fans as Ryback, and Daniel Bryan, who saw immense success on the independent scene as Bryan Danielson.

After his release from WWE, Carlito returned to World Wrestling Council, owned his father, Carlos Colón. Carlito saw immense success in his father’s promotion, ultimately winning the WWC Universal Heavyweight Championship on 17 occasions. This past January, he returned to WWE as a surprise entrant in the 2021 Royal Rumble match. Carlito would appear the following night on Raw, teaming with Jeff Hardy in a winning effort over Elias and Jaxson Ryker. This marked his final appearance with WWE, as of this writing, despite rumors that he was in long-term negotiations with the company.

Ric Flair retired from WWE in-ring competition following a loss to WrestleMania XXIV, in March of 2008, to Shawn Michaels. This was the culmination of an extended story; per McMahon’s stipulation, Flair would be forced to retire if he lost another match. Flair made sporadic appearances on WWE programming since then before debuting for Total Nonstop Action Wrestling. Flair eventually returned to the ring under the TNA banner; in the eyes of many fans, this rendered his retirement on WWE programming null and void.

This wasn’t to say that Flair’s relationship with WWE soured. He became a two-time WWE Hall of Famer. Furthermore, he was able to see his daughter, Charlotte Flair, thrive in the company. He has spoken glowingly about his daughter on multiple occasions. Case and point, on Inside the Ropes, he stated she was a better athlete than he ever was. As of this writing, Charlotte is a 13x women’s world champion in WWE. It’s safe to say that the prospect of her meeting or surpassing her father’s records, in the company’s eyes, is not a matter of if but when. Ric himself would continue to appear on WWE, whether it was to support his daughter, share words of wisdom to younger stars, and infamously, entering an on-screen romance angle with Lacey Evans.

It’s amazing to see how real-life circumstances can influence professional wrestling on TV. Whether it was Paul Heyman invoking wrestling’s past in a heated segment with Vince McMahon or an irate Joey Styles verbally eviscerating WWE on live television, these instances make for memorable TV. Ric Flair’s promo on Carlito was no exception. While it led to a short-term program, its impact has been everlasting. Until recently, fans speculated as to its legitimacy and how much reality played into it. It may not be the first Ric Flair promo fans think of when discussing “The Nature Boy’s” work. With that said, it should be in the discussion all the same.

Stay tuned to the Last Word on Pro Wrestling for more on this and other stories from around the world of wrestling, as they develop. You can always count on LWOPW to be on top of the major news in the wrestling world, as well as to provide you with analysis, previews, videos, interviews, and editorials on the wrestling world. You can check out an almost unlimited array of WWE content on the WWE Network.