Puerto Rico’s CWA was deprived of celebrating their 12th Anniversary last year due to the COVID-19 pandemic. It was the first time the company missed an Anniversary show despite all the natural disasters that have plagued the island of Puerto Rico in the last 4 years (Hurricane Maria, the early 2020 earthquakes & the COVID-19 pandemic) and halted wrestling again and again. To make up for it, CWA has decided to celebrate both their 12th & 13th Anniversary with back to back events broadcasting through YouTube.

The matches of both cards have already been taped but will be broadcasted with live commentary as all of CWA’s shows have done for years now. After a chat with producer and commentator Melvin Morales, plans of simulcasting the two events through both Facebook and YouTube have been discussed but not yet made official on their social media platforms. The cards are as follows:

Australian Suicide returns to Puerto Rico after losing the CWA Tag Team titles over a month ago. This is a pretty interesting match given the styles of all three men. Australian Suicide is of course well known by many for his spectacular AAA cultivated high-flying style. Alfredo Melies is a more grounded mat technician who tends to prefer submission holds and Suplexes. Finally Edrax is primarily a tag team wrestler alongside Adam Riggs. 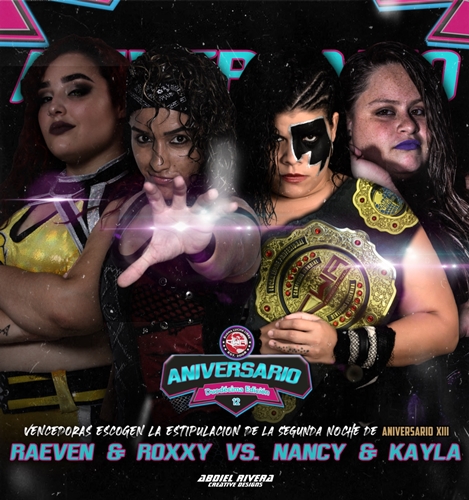 This one is a bit confusing. The stipulation is that the winners get to choose the stipulation for their match the next night, but the matches for the next night aren’t official yet. It might be a case that the matches will be announced and the winners add a stipulation or the winners get to name matches for the 13th Anniversary the next day. The Women’s division in general has been…… confusing, over the course of the year. However, there’s no doubt that despite the very limited roster of women available not just in CWA but on the whole island, everyone works very hard to raise the quality of work and star-power of women’s wrestling

Louis Forza has had a long string of short but sweet title defenses since winning the Championship over a year ago. Defeating young, up-and-comers like himself as well as veterans along the way. Super Georgie, once known as the Mucha Lucha parody character Rikochet, has been one of Puerto Rico’s most successful Jr. Heavyweight Champions. Georgie has also become one of the best trainers in the island in the past 10 years, inheriting the school of legendary wrestler, referee and trainer, Thomas “El Martillo” Marin. Super Georgie is set for a double header this week. Challenging the young, successful Forza here in CWA and later in the week, competing as well on IWA’s own Pay-Per-View event where he defends his school’s CWS title. In short, this is the Champion’s toughest challenge to date. As he faces a veteran wrestler that is capable of moving faster than most of his younger challengers. 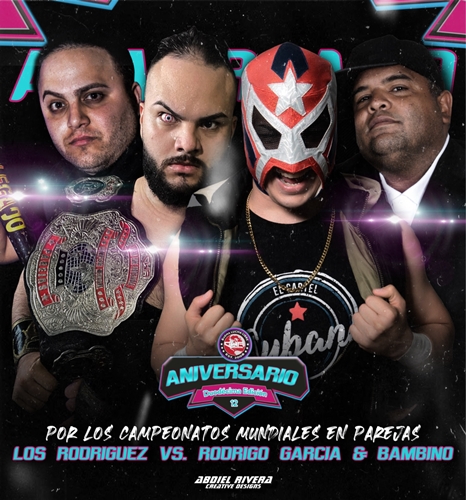 An unexpected grudge match, paying off a 3+ year storyline appeared when the Rodriguez Brothers re-appeared in CWA recently and sneaked their way into a tag title match against Jeremiah Saint & Australian Suicide to win the titles with the help of Rodrigo Garcia and CWA’s corrupt management. But the Rodriguez brothers were quick to turn around. In November 2018, Rodrigo Garcia betrayed his most loyal assistant, Manuel Rodriguez injuring his eye and traumatizing him in the process. However, real-life wrestling politics led to Garcia leaving CWA for WWL. Years later, they work in the same company where the story has begun again.

The Rodriguez are multiple-time Tag Team Champions in CWA, working there for many years. They’re sons of legendary Puerto Rico wrestler Victor The Bodyguard, who wrestled for over 20 years primarily as Chicky Starr’s kayfabe bodyguard and tag team partner before tragically passing away in 2004. Rodrigo and Bambino have been long-standing wrestlers for CWA for many years, making this match one that celebrates the legacy of the company and the people responsible for its growth.

By far the best part of CWA in the midst of the pandemic has been Dimes and his title reign. Every title defense he’s had has been the highlight of the night and by a lot. He’s a former CWA World Champion but this Intercontinental title reign has been the highlight of his career with a consistent stream of great matches as the shows go by. Diosdado on the other hand is a talented, young wrestler that has been struggling for opportunity for a couple of years now. Trying his hand in the IWA before landing here in CWA a few months ago. He’s already challenged for the title in the past but came just a bit short. Now he gets a second opportunity to try and topple the most consistent performer in the company. 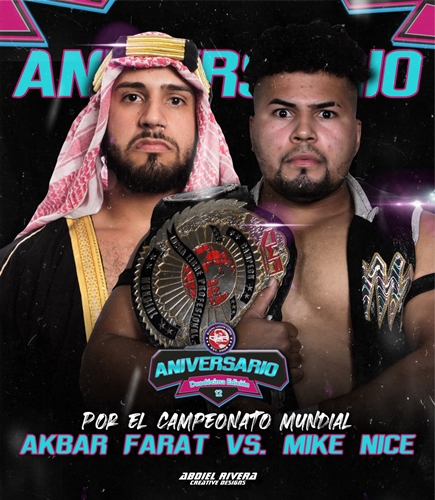 Here’s an interesting one. Akbar Farat is not exactly a face familiar to CWA. He is however the nephew of Prince Al Farat who had a notable stint in WWC during the company’s prime years in the late 80’s and into the 90’s following the Bruiser Brody tragedy. Akbar Farat has been wrestling primarily for the northeastern independent companies in the U.S., however, he’s always maintained his family’s wrestling connections. He’s been brought in to CWA by Rodrigo Garcia to challenge Mike Nice. The Champion spent the first half of the year teasing the idea of turning heel and joining the corrupt CWA authority, but instead, he stuck to his morals to win the CWA World title twice heading into the second half of the year. Now firmly a babyface opposing CWA’s president and staff, he takes on their latest “heavy” in a very jacked US indie wrestler with ties to Puerto Rico to headline their 12th Anniversary.

A simple showcase match as two of the Espiritu Dojo students take on the debuting team of Talos and Abdul Farid from the independent scene of the island. This match is set to take place on the 13th Anniversary’s pre-show.

Diosdado gets a second Championship match courtesy of winning a tournament over the past few weeks. The “AV” title is meant to be a “Television” title. But changes due to the pandemic have forced the title to fall into the background. Real OB has had many good matches over the course of the year, however, he’s lost several of them. A DQ against Eddman, failing to take the Intercontinental title from Dimes. Who knows. Maybe Diosdado winds up winning both titles and unifies them, lowering the company’s title count from its “there are too many” six titles to a slightly more reasonable five.

#1 Contendership to the CWA World Championship: Jack Xavier vs John Slayer vs Nexen vs Luis Barreto 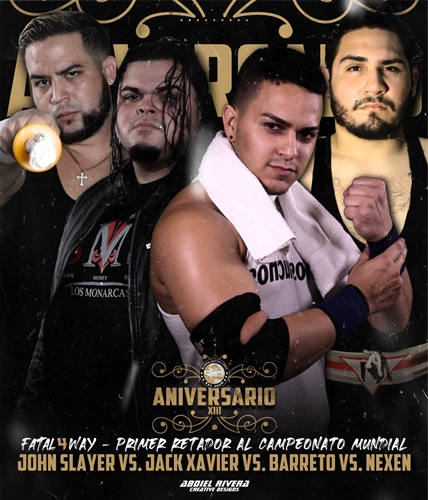 It’s not quite clear, but the winner of this match may be challenging the World Champion on this very show. Xavier & Nexen are Mike Nice’s last two challengers to the title. Meanwhile, John Slayer has been busy battling CWA’s heel authority stable which Jack Xavier happens to be a part of. Luis Barretto is brought in as a wildcard. Barretto is a former CWA World Champion that has been primarily wrestling stateside for the past few years, returning to the company on its anniversary.

Stay tuned to the Last Word on Pro Wrestling for more on this and other stories from around the world of wrestling, as they develop. You can always count on LWOPW to be on top of the major news in the wrestling world, as well as to provide you with analysis, previews, videos, interviews, and editorials on the wrestling world. The anniversary events will air on CWA’s YouTube channel also make sure to follow their Facebook page to stay up to date with the promotion.