Last Sunday, IMPACT Wrestling delivered one of the biggest surprises of the year when renowned New Japan Pro-Wrestling star “Switchblade” Jay White made his debut appearance to close their Slammiversary pay-per-view.

Following the excellent main event match where Kenny Omega retained the IMPACT World Championship by defeating Sami Callihan, Jay White made his way to the ring and confronted the group of Omega, Karl Anderson, Doc Gallows, and Don Callis.

With White’s motivation still unknown, there is a world of possibilities for world-class quality matches waiting for him in the IMPACT roster. Let’s discuss four of the most attractive possible matches we could see out of “Switchblade” in the next couple of months under the IMPACT umbrella.

Assuming White will be taking on more opponents outside of the Elite bubble, there might be no better choice than “The Walking Weapon” to showcase the abilities “Switchblade” to new audiences who might not be familiar with his fast-paced, hard-hitting style.

It goes without saying though that Josh Alexander would not only be only a tune-up or a showcase match for White, as the former IMPACT Tag Team Champion is rapidly becoming one of the company’s biggest assets and hottest wrestlers. He proved this yet again last Sunday during the Ultimate X Match at Slammiversary.

Also, Josh Alexander just might be the closest to wrestling a style White might be used to, while also presenting a different enough approach in Alexander’s powerhouse moves to almost guarantee a Match of the Year candidate.

Not only does this match makes perfect sense due to the raw talent from both performers in the ring, but also because Jay White is the current NEVER Openweight Champion. Essentially, this creates a “Champion vs. Champion” feud. 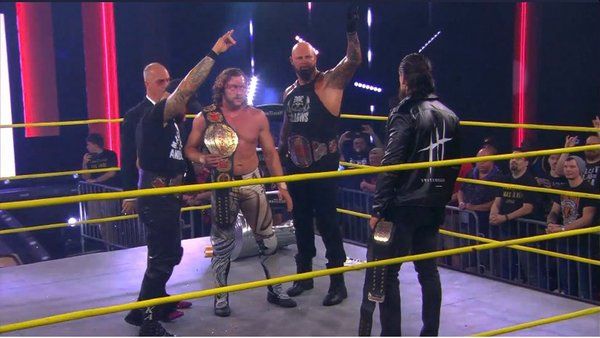 After Slammiversary went off the air following White facing off with Omega and the Good Brothers, out came Juice Robinson and David Finlay to very heelish-ly attack White. Before White could hit the Bladerunner, the attackers run out.

This should suggest that there’s unfinished business between FinJuice and “Switchblade” that needs solving all the way in the U.S. Additionally, while White and the members of The Elite might not be on the same page just yet, they also aren’t in an all-out war with each other. This translates perfectly into White and Omega having to team together to deal with FinJuice before their eventual one-on-one classic.

With all this perfectly fitting imaginary storyline in mind, a high-profile tag team program along with the IMPACT World Champion might also be an effective way to present “Switchblade” to a brand new audience. It also opens an opportunity to provide the best in-ring matches for returning live audiences without burning through their possibilities too early.

In what would hopefully be a complete 180 turn from the concept of the previous two matches, Moose would provide a combination of agility and strength that we haven’t seen anywhere near close Jay White before.

Contrary to the lighting-pace strong style we’ve come to expect from Jay White matches, a contest with Moose would give fans the opportunity to see “Switch” outmatched in a David vs. Goliath position that no other opponent could allow him to, in either IMPACT or NJPW.

In this case, it’s not all about Jay White. Lately, Moose has been presenting some of the best matches of his career against the likes of Rich Swann and Kenny Omega. These should earn him the chance of getting the eyes of the world with a match against the international star Jay White.

Lastly, once again assuming the end goal of White’s presence in IMPACT is an eventual clash against Kenny Omega, a victory over Moose just weeks after Moose himself couldn’t beat Omega would put White in a great position story-wise to challenge for “The Best Bout Machine’s” title.

Just like Moose, the biggest selling point for a match between White and Sami Callihan is the latter’s style and just how fundamentally different it is from White’s.

Callihan’s unpredictability and all-out performances have cemented him in the IMPACT roster as capable of holding the top belt and having the main event spotlight consistently in the past couple of years.

Just last week, Callihan lost a title match to Omega just seconds before Jay White made his way down the ramp. This basically repeats the hypothetical motivation for a match with Moose. Jay White has to be able to defeat Sami Callihan clearly before he moves on to a match with Kenny Omega.

A match with Sami Callihan also serves the purpose of presenting Jay White with arguably the toughest and most violent opponent he has ever face. This would make a statement, ranking one of IMPACT’s top stars right alongside White in an imaginary worldwide wrestling power rankings.