On ChocoPro #137, a feud that began over 10 months ago reaches its fever pitch. The ongoing saga between Lulu Pencil, and Pencil Army by extension, and Chris Brookes has been one of the most must-see stories Gatoh Move Pro Wrestling has showcased. Lulu Pencil played the “David” to Brookes’s “Goliath,” constantly struggling against her physically superior foe. All the while, she remained steadfast, which has led to this 30-minute Iron Man Match. Let’s catch up on how this particular story reached such an apex. 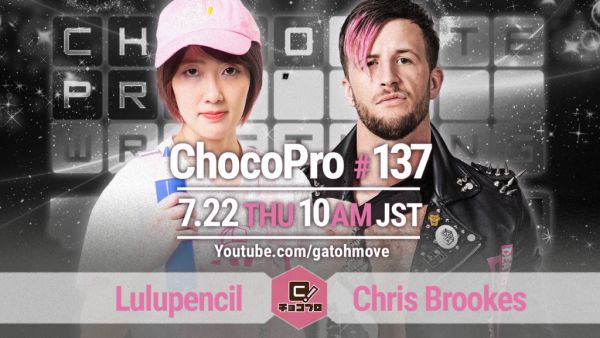 The feud between Lulu Pencil and Chris Brookes began on ChocoPro #44. On this episode, Brookes, who was DDT Universal Champion at the time, reluctantly defended his title against Lulu Pencil, believing her to be unworthy. Raising the ante, the Pencil Army commanding officer put her trademark pink hat on the line. Despite her best efforts, the earnest Lulu Pencil fell to Brookes, who gleefully took her hat as a trophy. From there, this story took a number of twists and turns, with the pink overalls-wearing freelance writer endeavoring to retrieve her beloved hat.

This finally occurred on ChocoPro #63, as Lulu Pencil teamed with Emi Sakura, AKA “Emi Pencil,” to face Brookes and Yuna Mizumori in an “I Quit” Match. Despite Brookes and “Yunamon’s” best efforts, Lulu Pencil refused to verbally submit. It wasn’t until Emi surrendered for her, as “Emi Pencil” watched her partner helplessly writhe in a submission maneuver, that the match came to an end. In a rare show of respect, Brookes returned Lulu Pencil’s hat. This would be the catalyst for Brookes eventually enjoying Pencil Army as “Chris Brookes.”

.@OBEYBrookes doesn't believe in fairy tales, but @lulupencil_gtmv does believe in herself. Look forward to the ironman match! #ChocoPro #gtmv

Despite optimistic beginnings, this union would turn sour as Brookes found himself losing multiple Gatoh Move matches as a Pencil Army member. Following a loss on ChocoPro #110, which saw the Pencil Army quartet, also including Minoru Fujita AKA “Mino Pencil,” fall to Best Bros and Egg Tart in an eight-man tag team match, Brookes snapped. He verbally ran down Lulu Pencil, regarding her as a loser and accusing that her Pencil Army teammates thought the same. As episodes passed, it was evident that Brookes’ words stung, which made Lulu Pencil’s sadness over losing a friend that much more palpable.

On the Masahiro Takanashi Return Show edition of ChocoPro, the match for episode #137 was made. Originally a standard singles match, Brookes challenged this, proposing an Iron Man Match. In his words, he could beat her as many times as he could in 10 years in a 30-minute window. Lulu Pencil accepted the challenge, knowing that this would be her chance to exorcise her proverbial demon that had become Chris Brookes.

NEXT: The Final Chapter, that I assure you.

This all started back on September 2nd last year and it ends July 22nd in Ichigaya.

This War Must Come to an End

It may surprise newcomers to know that this is only the second Iron Man Match in ChocoPro history. The first dates back to episode #17, in May of 2020, which saw Yuna Mizumori and Mei Suruga do battle in a 30-minute encounter. The fact that it took over one year for another Iron Man contest to take place in Ichigaya Chocolate Square speaks volumes about this match’s importance. Based on Lulu Pencil’s struggles and Chris Brookes’s dominance, one would immediately consider the nefarious Brookes the favorite to win.

This isn’t to say that Lulu Pencil is down and out. Since the inception of ChocoPro, she has grown by leaps and bounds, learning from not only her Pencil Army teammates but the opponents she’s faced. Furthermore, her confidence has only grown with each match. Though she has won tag team matches, her partner technically picking up the win, she has yet to secure a singles pinfall or submission. Even if she ultimately loses on ChocoPro #137, the idea of her securing her first pinfall or submission over her towering rival couldn’t be more poetic. This is going to be an episode not to miss.