Friday Night SmackDown is back and for the last time in the ThunderDome (though Raw will say goodbye to the ThunderDome on Monday)! The ThunderDome era, though rightfully polarizing, has brought about plenty of positives for SmackDown. The Rise of the Tribal Chief, the ascension of Bianca Belair. Last year’s excellent and lengthy feud between Sasha Banks and Bayley. However, when you consider how much better these aspects of SmackDown would have been in front of a live crowd, it is not too difficult to wish the 1,000 screens a last farewell and bird flip, too. So, what does this last farewell for the SmackDown edition of the ThunderDome have in store? Let’s take a look!

Baron Corbin is in the middle of an interesting character turn. Since the second he debuted in NXT all those years ago, he has been a brash, arrogant heel with little respect for his opponents. Then, after a stint as an authority figure, he won the King of the Ring in 2019 to become King Corbin – elevating his sense of narcissistic arrogance to newfound levels of grandiose annoyance. In recent times, the King has become a pauper, with Shinsuke Nakamura having won the crown from Corbin (with assistance from loyal guitar virtuoso bard, Rick Boogs) in a lengthy, bitter feud which has led to Corbin becoming a broken shell of the man he once was. Now, he has a chance at redemption in yet another match against the King of Strong Style turned One True King, Nakamura. Can Corbin get some retribution? Or will this be the loss that finally tips him over the edge? Tune in to find out.

Money in the Bank Qualifying Match: Seth Rollins vs Cesaro 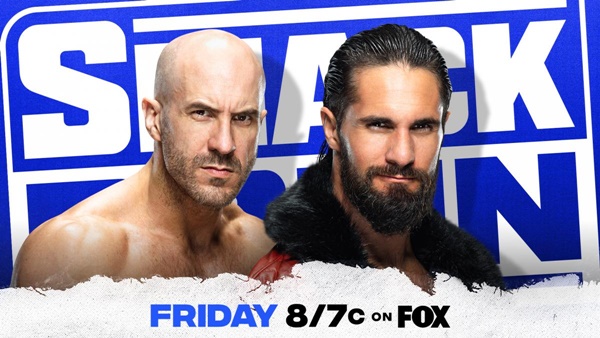 One of the last two Money in the Bank qualifying matches, Cesaro has another opportunity to prove to the world just how good he is. Much like Corbin vs Nakamura, this is a match we have seen a lot lately; with the two gifted athletes nearly stealing night 1 of the show at WrestleMania 37 (Bianca Belair and Sasha Banks did just that). Seth Rollins is having something of a great year himself – having consistently good matches since returning from paternity leave earlier in the year. In fact, it is probably accurate to suggest that these two men are incapable of having a bad match with each other and even though we have seen them wrestle each other plenty over the past few months, the match isn’t quite stale… yet. This should be the blow off to their feud and it happens tonight on Friday Night SmackDown, 8/7c on FOX – so tune in.

– Is it too much to ask for Liv Morgan, one of the most improved stars in recent times, to get a proper push? Hopefully tonight, she can make good on her intention to qualify for the Women’s Money in the Bank ladder match.

– Beardless Otis is a killing machine who cannot be stopped, as Angelo Dawkins found out last week. Who is next on his warpath?

– Bayley and Bianca Belair are just 9 days away from an I Quit Match at Money in the Bank. No doubt, tonight will push this feud further towards the match.

– Edge took out Jimmy Uso last week and with what has transpired outside of the ring, there won’t be a Jimmy Uso in Reigns’ corner this week. Will Main Event Jey Uso return to back up the Tribal Chief? Or is Roman going solo for the time being? Either way, the Rated R Superstar is thirsting for blood and Roman needs to be careful.