Gatoh Move Pro Wrestling is officially at the halfway point in regard to the ChocoPro One of a Kind Tag League. So far, long-time and new viewers have seen several competitive tag team bouts, each tandem looking to earn points to move up their respective blocks. Now that there are only a few shows left to go in the tag league, expect the wrestlers involved to increase their game that much more. This show will be especially intriguing, as one of the competing teams in Block A makes their tag league debut. Let’s run down the action set for ChocoPro #130. 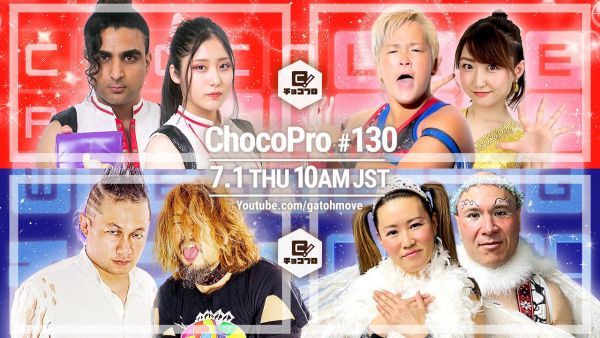 Standing at 3 points in Block A, Best Bros are one of the top teams to beat in the One of a Kind Tag League. This shouldn’t come as any surprise, given that Mei Suruga and Baliyan Akki have been the Asia Dream Tag Team Champions for over 180 days. Though they wrestled TropiKawild to a tie on the first day of the tag league, Best Bros rebounded strongly the second day, picking up a decisive victory over Dragon Ninja. Needless to say, as arguably the top team in Gatoh Move, Best Bros will be looking to go all the way in not just Block A but the tag league as a whole. Their third match won’t be easy, however, for Gatoh Move’s “Apple Girl” and the high-flying sensation from India.

Making their One of a Kind Tag League debut, on ChocoPro #130, is the team of Ayumi Hayashi and Ryo Mizunami. Collectively known as Wasshoi Aniki, this was one of the more surprising teams announced for the tag league. Keep in mind that neither the up-and-coming Hayashi or the seasoned Mizunami have teamed yet. However, their energetic personalities make them perfect as a combination. Whereas Hayashi’s “Wasshoi, Wasshoi” chant serves as a spirited rally cry, “Aniki” is the life of the party whenever she steps through the curtain, boasting seemingly infinite swagger. Can they bring their combined energy to their first One of a Kind Tag League victory? With opponents such as Best Bros, Wasshoi Aniki has their work cut out for them.

One of a Kind Tag League Block B Match: Melt Brain Dancing (PSYCHO and CHANGO) vs. White Comaneci (Tokiko Kirihara and Antonio Honda)

Melt Brain Dancing, the team of PSYCHO and CHANGO, entered the One of a Kind Tag League on a high note. In one of the first round of tag league matches, they bested Egg Tart, the duo of Chie Koishikawa and Hagane Shinnou. Despite their chaotic personalities and sheer unpredictability, Melt Brain Dancing has proven to be one of the teams to watch out for in this tag league. Keep in mind that, this past April, they took the reigning Asia Dream Tag Team Champions to the limit. PSYCHO and CHANGO will enter ChocoPro #130 with the intention of upping their Block B score to 4. To do so, they’ll have to best a unit they’re facing for the first time on this episode.

With a record of 0-2 in the One of a Kind Tag League, White Comaneci are mathematically unable to win Block B. Thus, they are not fighting for the right to become the first tag league winners; instead, they’re battling for pride. If nothing else, the team of Tokiko Kirihara and Antonio Honda can make their way onto the proverbial board. With that said, White Comaneci has been a fan favorite team in the tag league, largely due to their comedic antics, including the musical stylings of Kirihara and Honda. Once their angelic facades fall, White Comaneci reveal their true intent: to win at all costs. Can they spoil the tag league for Melt Brain Dancing? Tune into ChocoPro #130 to find out.