After somewhere between 13 and 14 months, WWE will be holding their last PPV event with no live audience from the Thunderdome and it so happens to be for one of the most popular stipulations in professional wrestling, the Hell in a Cell.

While we could hype this weekend’s event by remembering all the great HIAC matches in history we decided to go the different route and shine the spotlight on some of the best matches in the Hell in a Cell event history that don’t involve the actual cell.

Just around 6 weeks away from cashing in his Money in the Bank contract for his first WWE Championship reign, The Miz was wrapping up his feud with Daniel Bryan over the United States title which also managed to integrate John Morrison into it.

Considering we don’t get Submissions Count Anywhere matches that often in WWE this match carried the weight of the crowd not knowing what to expect and two competitors in the match not really having submissions in their arsenal.

These obstacles were ironically what made this match great since the ability from Miz and especially Morrison to adapt and try to actually apply submission maneuvers and taking advantage of the stage and ringside area made for a compelling match with the feeling that any man could have won it.

Finally, credit where is credit is due to John Morrison for his jump from the top of the stage which made this match that much more memorable and added one more clip to his personal highlight reel.

Big Show and Sheamus had a straight-up no-nonsense fight for the World Title which ended with Show recapturing the championship for the second and final time of his career.

Like it was said by Jim Ross while calling the match, Sheamus’ body looked like it was just dragged out of a car crash and he was not wrong, even before the match was over the Celtic Warrior’s welted body told the story of the match.

The match’s biggest strength was its pacing as the match went 21 minutes, much longer than Show’s regular matches, and it never felt dull or boring as the crowd bought into every single move these two threw at each other turning them into another big strength for the match.

This match also deserves a look back thanks to the unusual number of bumps Big Show took as at this point in time, we were pretty used to seeing Show not leave his feet so this match is a happy surprise in terms of how many times Show made the entire arena shake.

Most people seem to think of their Battleground classic when remembering The Shield and the Rhodes Brothers rivalry from 2013 and for good reason as that match deserves all the credit it gets but when looking back at their awesome saga 8 years ago this match absolutely deserves to be in the conversation.

In arguably the best match of the night, the Rhodes Brothers retained the tag titles after almost 15 minutes of fast-paced action, high spots, and false finishes.

This match feels special for a couple of reasons. Firstly, it happened during a great year for all the teams involved as the three teams were involved in a series of top-quality matches, that also featured the Wyatt Family every once in a while, which really helped to put some shine on the tag team division.

Secondly, this match offers a variety of false finishes where every single one of them could have realistically ended the match considering each team had a legitimate claim to the titles and each team worked as hard as humanly possible during the match.

Finally, both Rollins & Reigns and Cody Rhodes & Goldust would stop tagging respectively together in the next couple of months which makes this match one of the last times we were able to appreciate both teams while The Usos were just starting an upward trajectory career.

Hell in a Cell 2017: Baron Corbin vs. AJ Styles vs. Tye Dillinger

Now, this may be a match not too many people would expect to be on this list but to be honest this was probably one of the best matches in both Corbin and Dillinger’s WWE careers while being expertly complemented by five-star classic expert AJ Styles.

And while we’re not saying this is a five-star match it could have made a very good case for match of the night if the Usos and New Day hadn’t stolen the show already.

All three men played their role to perfection with Styles being confident even with the odds against him, Dillinger trying (and achieving) to prove he belongs in a PPV championship match and Baron Corbin being the cowardly heel who ultimately steals the win.

Like we said, this match may be the dark horse on this list but it still deserves a look back since it delivers as an entertaining triple threat with some of the most exciting spots of the night and honestly, Dillingers ‘s career.

Hell in a Cell 2019: Roman Reigns and Daniel Bryan vs. Rowan & Harper 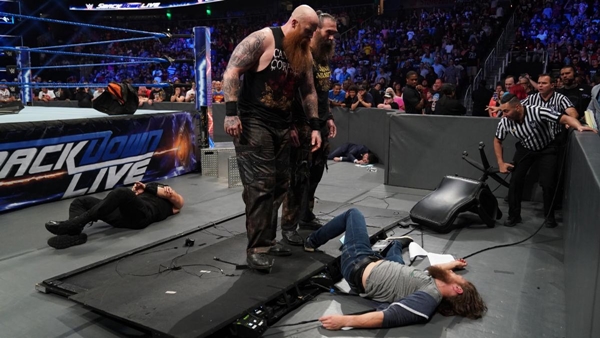 In the most recent entry in our list we have maybe the oddest combination in the list.  Following the breakdown of his successful partnership with Rowan, Daniel Bryan turned babyface and joined forces with Roman Reigns to take down Rowan and his renewed partnership with the returning Harper.

After months of being on the shelf, this was the first time we saw Harper in a PPV program for a long time and for a lot of people, it was a relief to see him alongside Rowan once again as they were a proven success in the tag division.

The match itself was nothing short of excellent and it was only enhanced due to the Tomado stipulation which made the match frenetic and filled with action as both Reigns and Bryan took a beating for most of the match before eventually winning it after a great table spot and an equally great false finish.