This week’s episode of Friday Night SmackDown is the go-home edition ahead of this Sunday’s Hell in a Cell pay-per-view. It is not every day that we get to preview a Hell in a Cell match taking place on SmackDown, but tonight’s show will have just that – with two competitors facing off in the unholy structure. On SmackDown. Two days before the PPV of the same name – more on that later. In addition to the Hell in a Cell match, SmackDown has broken away from recent tradition and has announced a flurry of other matches and segments for us to preview. It is Christmas in June! So let’s not waste anymore time; here is the preview!

Sunday. Friday. Any day.
Makes no difference to me.

It'll be my pleasure to disgrace what's left of your family name tomorrow night inside Hell in a Cell!

My Special Counsel @HeymanHustle will handle the paperwork.

Battle for the Crown: Shinsuke Nakamura vs King Corbin

Shinsuke Nakamura and King Corbin will be squaring off for the crown. Both the physical crown belonging to Corbin and the metaphysical title of King – which both men use sparingly – will be on the line. King Corbin versus the King of Strong Style, Shinsuke Nakamura. Nakamura has to win this match. Firstly, he is one of the most talented; most recognized stars on the roster, who could be a potential opponent for Roman Reigns somewhere down the line. Secondly, it is time for the character of King Corbin to end. Baron Corbin has all the makings of being a good heel character, but the run as King has an opportunity to reach a natural, fitting end. However, with Nakamura seemingly getting the upper-hand every week, there is a possibility he loses here.

Beardless Otis is the physical manifestation of our worst nightmares. Unfortunately for the Street Profits (Montez Ford and Angelo Dawkins), he exists in our reality; and he took out Montez Ford last week, to show that this new look Otis is a more refined, serious version of his former self. He and Chad Gable want one thing: the SmackDown Tag Team Championships. Taking out former champions in the Street Profits helps them in forging a path to realizing their ambition. This week, Angelo Dawkins wants revenge. Will Beardless Otis strike again? Tune in to find out.

After Sami Zayn took the fall (with Apollo Crews) against Big E and Kevin Owens last week, he was kicked to the curb. It was announced that Commander Azeez (we still don’t know how he got the title of Commander, by the way) would be stepping in to team up with the Nigerian Royal, Apollo Crews. This will, of course, be Commander Azeez’s in-ring debut and he will undoubtedly prevail in a dominant showing. It is not going to be pretty for Big E and Kevin Owens. They might lose this battle, but one of them might just win the war and capture the Intercontinental Championship in the future. Expect a Sami Zayn appearance.

Hell in a Cell Match: Roman Reigns vs Rey Mysterio 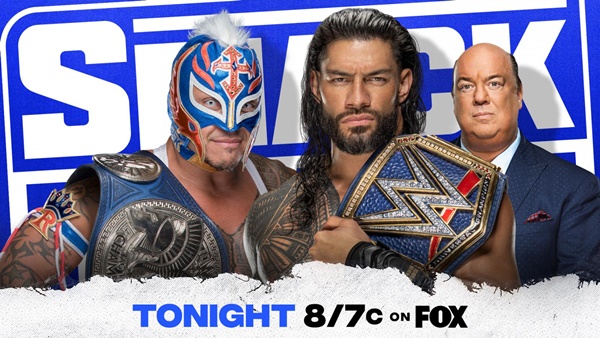 The Hell in a Cell match between Rey Mysterio and Roman Reigns, which was originally scheduled for Sunday’s PPV, has been moved to tonight. Why? We are unsure. It also does not make too much sense. However, we will allow it – simply because it is extremely rare for a match type of this magnitude to take place on an episode of Raw or SmackDown. The Tribal Chief has been terrorizing the Mysterios in recent weeks. Two weeks ago, he demolished Dominik Mysterio; giving him the beat-down of his life (so far). Last week, after being attacked by the vengeful Mysterio Reytriarch with a kendo stick, Roman made a comeback and eviscerated both men single-handedly. Right now, Roman has never looked so strong. Tonight, he is likely going to destroy Rey. Does this mean a vengeful Dominik will face off with him this Sunday? You will have to tune in to Friday Night SmackDown on FOX to find out.

– Bayley will continue her feud with Bianca Belair. Should Belair win on Sunday, it should spell the end for Bayley’s title chase. Expect her to try to get an early advantage tonight.

– Cesaro returned last week to attack Seth Rollins. This Sunday, they square off – so expect some last minute brawling between the two.