Professional wrestling is built on the stories told in and out of the ring. These often come in the form of rivalries, pitting opposing forces against one another in pursuit of bragging rights, championships, and successes. In this edition, we take a look at a feud that, while mismatched on paper, is fondly remembered by wrestling fans – The Hurricane vs. The Rock.

With a career as legendary as that of The Rock, wrestling fans can easily rattle off his most notable rivals. From Triple H to Hulk Hogan to “Stone Cold” Steve Austin to John Cena, “The Brahma Bull” has locked horns with many well-known names. This isn’t to say that his feuds haven’t gone off the beaten path. In fact, depending on who you ask, his brief feud with The Hurricane is a classic in its own right. Despite the obvious mismatch, their interactions are still fondly remembered.

The Hurricane vs. The Rock – An Overview

A 10x world champion and a master of the microphone, The Rock needs no introduction. However, by 2003, the once fan-favorite WWE Superstar had become a pompous personality, fueled largely by his newfound success in the film industry. This “Hollywood” persona saw him routinely insult crowds and verbally run down his opponents. While the latter wasn’t uncommon for The Rock by this point, “Hollywood” Rock did so with disdain as opposed to a desire to entertain his millions (and millions) of fans.

Opposite of The Rock, in this short-lived feud, was WWE’s masked purveyor of justice. “Stand back, there’s a Hurricane coming through!” The Hurricane was originally a comedic personality, portrayed by Gregory Helms, birthed during The Alliance angle. Simply put, Helms believed himself to be a real-life superhero. Though the character was originally portrayed as a delusional, albeit entertaining, heel, WWE fans gravitated to him. The Hurricane became beloved, though before his encounter with “The Great One,” he seldom locked horns with the top stars. This alone made The Hurricane’s feud with The Rock must-see.

On the February 24, 2003 edition of Monday Night Raw, The Rock was relaxing backstage, playing his guitar and “serenading” the country of Canada. It’s important to note that, by this point, The Rock had reentered his long-standing feud with Steve Austin. Furthermore, later in the night, the Rock would participate in a 20-man battle royal to determine a new number one contender for the World Heavyweight Championship. As The Rock was singing and playing, he was interrupted by The Hurricane, who leaped into frame to decry “The Great One’s” foul attitude. Meanwhile, The Rock was more interested in verbally attacking his unwelcome visitor.

“The Rock knows exactly who you are,” he said. “Green shirt, ‘H’ on your chest, green mask… Oh, you’re the Hamburglar!” From there, The Rock and The Hurricane took part in entertaining banter, with the latter believing he could defeat the Scorpion King, a movie character portrayed by Dwayne Johnson himself. Given that The Hurricane would also be part of the aforementioned battle royal, if The Rock didn’t have a reason to go after WWE’s resident superhero before, he certainly did then.

The Rock excelled in the battle royal, eliminating the likes of Tommy Dreamer, Kane, and yes, The Hurricane. To his credit, The Hurricane put forth a valiant effort, standing toe-to-toe with “The Great One” for a brief period. However, this wouldn’t be The Rock’s night, as he would be eliminated last by the eventual winner, Booker T. As Booker advanced toward a world title encounter with Triple H, The Rock’s focus remained on Steve Austin, resulting in their final encounter at WrestleMania XIX. All the while, the steadfast Hurricane was a sustained thorn in “The Great One’s” side.

The Lead-Up to the In-Ring Encounter

In fact, the backstage segments between The Rock and The Hurricane became the most memorable aspects of their mini-feud. Whereas The Rock was arrogant and dismissive, The Hurricane’s charisma and wit couldn’t be denied. They shared few segments on TV, but when they did, WWE’s superheroic cruiserweight held his own from a verbal standpoint. Meanwhile, The Rock wasn’t shy about responding to The Hurricane’s comedic banter as if it truly offended him; this only entertained the fans watching that much more.

On the March 10, 2003 episode of RAW, The Hurricane would wrestle his biggest match to date against The Rock himself. Before their only singles encounter, a no-disqualification match at that, the two met backstage in another segment. Once again, the comedy between the two flowed like water. However, at the end, The Rock seemed to show a rare sense of respect, requesting a handshake, only to lay out The Hurricane with a cheap shot. Needless to say, respect was the last thing on either man’s mind heading into the main event.

To say that The Rock’s blatant disrespect continued in this match would be an understatement. Despite this, the plucky Hurricane stood his ground, taking the fight to the former multi-time world champion. The Rock was simply on a different level, from a competitive standpoint, even mockingly donning his opponent’s trademark cape. Though fans watching in attendance and at home were largely behind The Hurricane, his uphill battle against The Rock made the superhero appear as though he was taking on an entire rogues gallery at once. His spirit unyielding, the weary Hurricane fought on, even successfully executing a rare successful chokeslam on “The People’s Champion”.

The match approached its conclusion as The Rock readied The Hurricane for The People’s Elbow. Just as he was about to drop the elbow, The Rock was interrupted by Austin, who marched down to the ring. At that point, The Rock’s full attention was on “The Texas Rattlesnake,” which was all the opportunity The Hurricane needed. From out of nowhere, The Hurricane rolled up The Rock for a three-count before quickly making his way back up the ramp. Though he did so with outside assistance, it will forever show in the record books that The Hurricane secured a win over The Rock.

This isn’t to say that The Hurricane’s confrontations with The Rock ended here. Leading up to The Rock’s aforementioned WrestleMania XIX showdown with Austin, “The Great One” held the first-ever of its kind, The Rock Concert. On this night, he lobbed insults at Austin and the city of Sacramento in song. The Hurricane would drive a pick-up truck to the ring that fans believed Austin was steering. The superhero was quickly apprehended by police officers. Afterward, Austin emerged from the back of the truck, delivering an ass-whooping as only “Stone Cold” could. 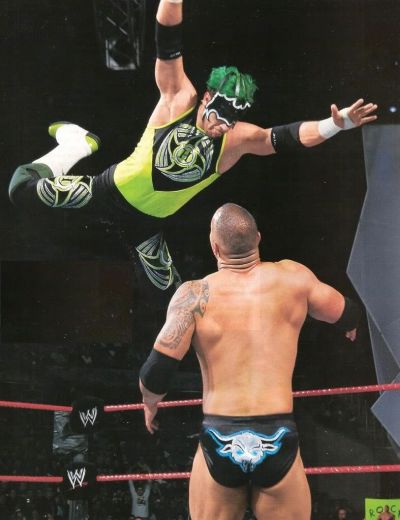 The Hurricane vs. The Rock – In Closing

The Hurricane and The Rock would cross paths in the future, though as allies. Over time, the superhero and proverbial supervillain developed a sense of respect toward each other. In time, The Rock’s “Hamburglar” comments toward The Hurricane were said with playfulness, not spite. This was an instance where time healed all wounds.

Adding to the memorability of The Hurricane vs. The Rock is that, realistically, it didn’t even cover a full calendar month. The build to their eventual Raw main event spanned only a few weeks. Despite this, they were able to create TV magic. Sometimes the most memorable feuds in wrestling are those that have burned short but bright. The Hurricane’s brief yet unforgettable encounter with The Rock is evidence of this.