Leave it to Game Changer Wrestling to take a term meant to disparage a certain style of wrestling and own it. This Saturday, the independent wrestling company makes its Laramie, Wyoming debut with GCW Outlaw Mudshow. To say that this is unique territory for the company would be an understatement. The GCW crew and talent intend to make this first show in the area a success. To do so, they have brought together up-and-coming stars and established veterans alike. Here’s what to expect when Outlaw Mudshow emanates from The Range Arena at The Albany County Fairgrounds. 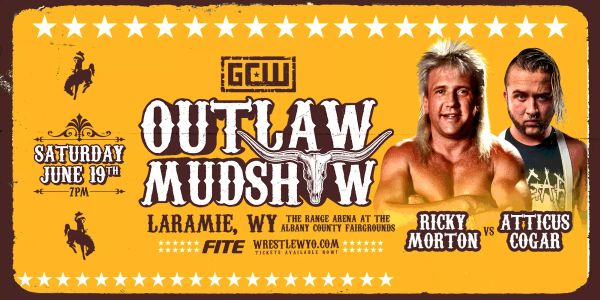 The Spirit of Rock ‘n’ Roll Lives in Wyoming

The first announced match for GCW Outlaw Mudshow will pit Atticus Cogar against Ricky Morton in an intriguing encounter. Longtime GCW fans will undoubtedly be familiar with Cogar, as he is a member of the nefarious 44OH faction. This isn’t to say that “Silver Teeth Satan’s” success is exclusive to the faction. During his time in GCW, throughout 2021, he has picked up massive victories over the likes of Tre Lamar, EFFY, and Tony Deppen. His thirst for violence and anarchy fits his trademark deathmatch wrestling style well, too. At GCW Outlaw Mudshow, however, he will be up against the man who embodies “Rock ‘n’ Roll” in the professional wrestling world.

In simple terms, the legendary Ricky Morton defines tag team wrestling. Most fans will remember him as one-half of The Rock ‘n’ Roll Express. From 1980 onward, the team held the NWA World Tag Team Championship on nine occasions. They would also be incredibly successful in Smoky Mountain Wrestling, holding the SMW Tag Team Championship a record-setting ten times. To this day, Morton wrestles at a high level. His last appearance took place earlier this year at GCW Fight Forever‘s 44OH’s What We Want block. In this match, he teamed with his son, Kerry Morton, in a losing effort against 44OH’s Cogar and Rickey Shane Page. With the elder Morton wrestling his first match since January, will he be able to defeat his younger foe in Cogar? 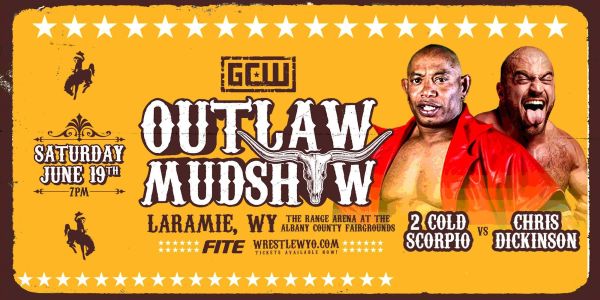 When a Wrestler Becomes a Fan Again

A few days after this match was announced, Chris Dickinson took to Twitter to express his gratitude for the match in question. Dickinson said that, when he was in the fourth grade, he watched his first Extreme Championship Wrestling match; one of the competitors involved in said match was 2 Cold Scorpio. In fact, a fair degree of the success Scorpio saw in wrestling came in “The Land of the Extreme.” Scorpio boasts one ECW World Tag Team Championship reign, alongside The Sandman, as well as four separate ECW World Television Championship victories. It’s also worth noting that Scorpio holds the record for most reigns with the latter title. In any event, Dickinson regards facing Scorpio as an honor.

In fact, this marks the first time that 2 Cold Scorpio and Chris Dickinson will face off. Despite making multiple appearances for GCW in the past, these men have never crossed paths. Nonetheless, it’s easy to see why the GCW faithful would be excited to see this encounter. Dickinson’s offense can best be described as “explosive,” as he often implements power-based maneuvers. Meanwhile, Scorpio’s approach consists of technical and high-flying maneuvers. Even at the age of 55, Scorpio can still fly, which speaks to his longevity. For those that follow GCW on a regular basis, it’s easy to see why this upcoming encounter has so much hype behind it. 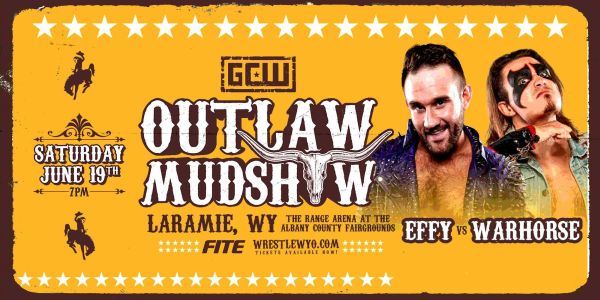 Riding into the Experience

For the first time, WARHORSE is ready to ride into Wyoming. Regarded as one of the most popular wrestlers on the independent scene today, WARHORSE has maintained his presence throughout 2021. From Warrior Wrestling to Pro Wrestling ZERO1 USA, the viking-spirited warrior knows just as much for his colorful personality as he is for his catalog of matches. He also stands as the longest-reigning IWTV Independent Wrestling Champion, having held the title for 532 days. In the state of Wyoming, for GCW Outlaw Mudshow, WARHORSE will square off with a man he shares history with.

Enter “The EFFY Experience” which has been just as prevalent on the independent scene as WARHORSE’s endeavors. In fact, the last time the two squared off was back in February of 2020. At Black Label Pro‘s Quantum Leap event, the two wrestled in an IWTV Independent Wrestling title match to a no-contest. In any event, in GCW, there are few wrestlers as synonymous with the promotion as EFFY. Most recently, he proved his toughness at the Tournament of Survival 666, battling deathmatch wrestling veteran G-Raver. While EFFY has remained a consistent performer in GCW, WARHORSE’s last appearance dates back to 2019, which saw him lose to Gary Jay at 2 Cups Stuffed. In his first GCW match in almost two years, will the WARHORSE ride once more? 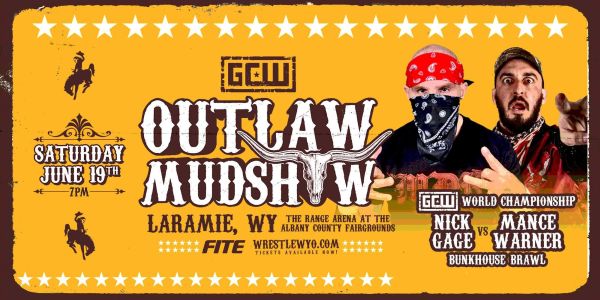 To say that Nick Gage has been busy the past several weeks would be an understatement. Most recently, he’s been at odds with Matt Cardona, which stemmed from seemingly innocent social media interactions. Little did fans know that matters between the former “Long Island Iced Z” and the current GCW World Champion would become volatile. Simply put, matters quickly escalated between the two. Whether it was Cardona appearing at the end of GCW Zombie Walk to lay out “The King of Ultraviolence” or Gage crashing Cardona’s live podcast event, it became clear that both men needed to resolve their dispute. This led to their GCW World title match being made official for GCW Homecoming Part 1. Before this match takes place, Gage must maintain his focus. He will head into GCW Outlaw Mudshow for an important title defense.

Mance Warner is no stranger to world championship gold. Whether in IWA Mid-South or Combat Zone Wrestling, “Ol’ Mancer” has proven himself as a top star time and time again. Most recently, he’s been ruling the roost in AAW Pro, holding the AAW Heavyweight Championship for over 500 days; this is the longest reign of any titleholder since its inception in 2005. In terms of GCW competition, his most recent matches have seen him teaming with his Second Gear Crew teammates, Matthew Justice and 1 Called Manders included. However, at GCW Outlaw Mudshow, Warner will wrestle his first one-on-one match for the promotion’s top prize since this past November, when he fell short against then-champion Rickey Shane Page at So Much Fun.

Can Warner throw a monkey wrench into Gage’s plans for GCW Homecoming by claiming another world title, in a Bunkhouse Brawl of all stipulations? Tune into GCW Outlaw Mudshow this weekend to find out.

GCW Outlaw Mudshow will take place at The Range Arena at The Albany County Fairgrounds in Laramie, WY on June 19, 2021.

Stay tuned to the Last Word on Pro Wrestling for more on this and other stories from around the world of wrestling, as they develop. You can always count on LWOPW to be on top of the major news in the wrestling world, as well as to provide you with analysis, previews, videos, interviews, and editorials on the wrestling world. GCW Outlaw Mudshow is set to air on Saturday at 9 PM EST on FITE. Tickets for the event are also available via Eventbrite.