The original ECW One Night Stand, held in the Hammerstein Ballroom in New York, was a landmark event. This, along with the DVD sales numbers for The Rise and Fall of ECW, showed that there was interest in the Extreme Championship Wrestling brand. Though the counterculture promotion ceased operations in 2001, its spirit lived on through its fans and the wrestlers that helped make it the entity it became. In 2006, World Wrestling Entertainment announced ECW’s revival as a third brand, not unlike what NXT is today. Later that year, the promotion held the sequel event, ECW One Night Stand 2006. In the main event, Rob Van Dam, the top ECW representative of the time, battled John Cena for the WWE Championship.

The Rise of Rob Van Dam

In the spring of 2006, Rob Van Dam was on a roll. Though a knee injury sidelined him for most of 2005, “The Whole Dam Show” was driven to make 2006 his year. He returned to the ring at that year’s Royal Rumble event, but it wasn’t until WrestleMania 22, the following April, where things truly heated up. Prior to this, RVD qualified for the Money in the Bank Ladder Match. RVD would go all the way at WrestleMania, besting Finlay, Shelton Benjamin, Matt Hardy, Ric Flair, and current WWE Champion Bobby Lashley to win the Money in the Bank briefcase. With this, RVD had a guaranteed world title match within the calendar year.

This was a big moment, not only for Rob Van Dam but for WWE fans as well. Since making his return to the company in the summer of 2001 – considering his brief stint in 1997 was an ECW “invader” – RVD quickly became one of WWE’s most popular stars. With The Alliance a faction of heels, RVD stood out as a clear fan favorite, even when working alongside nefarious WCW and fellow ECW alumni. Many fans longed to see “The Whole F’N Show” as world champion, though they would have to wait a few years. 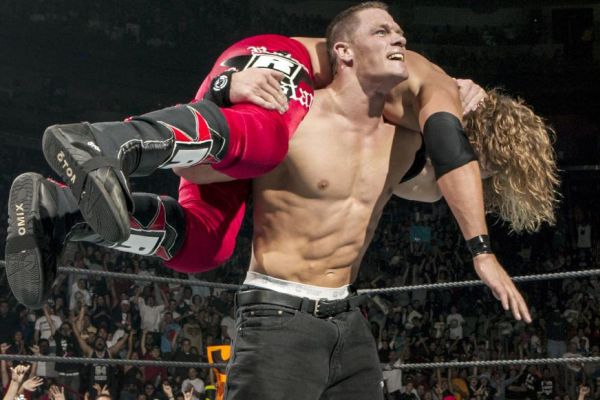 The Face of WWE, John Cena

As RVD was building momentum heading into the summer, even winning his sixth Intercontinental Championship for a spell, John Cena had become WWE’s top star. However, this wasn’t without its controversy. Cena turned babyface in 2004, but as the months progressed, many avid wrestling fans soured on “The Doctor of Thuganomics.” This created a divide among WWE fans; for every viewer that cheered Cena, there seemed to be another that wasn’t shy about booing him. Despite said divide, Cena was still the company’s hot, young star. This made his main event encounters must-see for supporters and detractors alike.

By early 2006, John Cena was a two-time WWE Champion, having won the title back from Edge at that year’s Royal Rumble event. Following his feud with Edge, and later Triple H, Cena was approached by the Money in the Bank winner. Rob Van Dam made his intentions clear: he was going to cash in on Cena and his WWE Championship. This was the first time, in Money in the Bank history, that the winner announced their cash-in ahead of time. To the surprise of the WWE Universe, as well as Cena, RVD declared his cash-in for June 11, 2006 – ECW One Night Stand 2006.

This was monumental for a few reasons. First, this represented the first WWE title defense in an ECW ring. Second, a confident Rob Van Dam boasted that if he won, the WWE Championship would be rechristened the ECW World Heavyweight Championship. Leading into ECW One Night Stand 2006, Cena would become physically involved with other ECW stars, Balls Mahoney, The Sandman, and Sabu included. It was clear that Cena, as WWE’s figurehead, would have to unleash an extreme mindset if he were to defeat the heart and soul of ECW in RVD. However, if Cena expected a warm welcome upon stepping through the curtain at the Hammerstein Ballroom, he was gravely mistaken.

ECW One Night Stand 2006 boasted an eclectic card, to say the least. The second-to-last bout saw ECW stars Balls Mahoney and Masato Tanaka face off in an Extreme Rules Match. Meanwhile, the undercard featured Randy Orton facing Kurt Angle, the latter of whom the ECW faithful responded positively to despite being a WWE Superstar. The same couldn’t be said for John Cena in the main event. While RVD was greeted as the conquering hero by those in attendance, Cena’s entrance saw him swept up in a wave of boos. The response of the Hammerstein Ballroom attendees could best be described as “visceral.”

This negativity didn’t end with Cena’s entrance, though. When he tossed his hat or shirt into the crowd, they responded by throwing it back at him. In fact, a select few fans elected to throw toilet paper at the WWE Champion. Derogatory chants were not in short supply, further indicating just how unwelcome Cena was on ECW soil. Fan signs, including one that read “If Cena Wins We Riot” became synonymous with this main event as well. This wasn’t a mixed response that one would associate with Cena at traditional WWE events. Without a shadow of a doubt, this was a collective declaration of hatred from the audience. To say that Cena had an uphill battle, on this night, would be putting matters lightly. 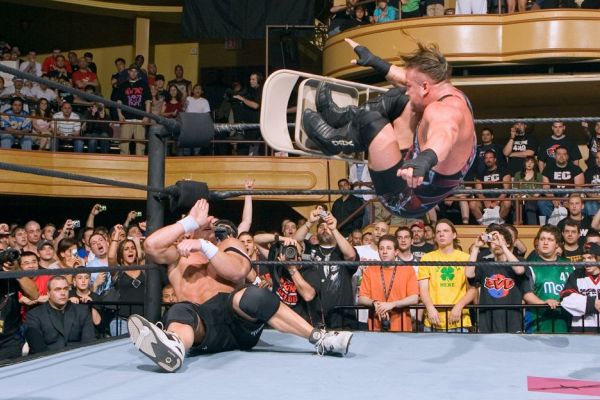 The ECW One Night Stand 2006 main event started slow, though the fans’ collective response was anything but. Chants of “You Can’t Wrestle,” among other choice phrases, were directed at Cena. If he built up any offense, the fans responded as if he had personally insulted them to their faces. Meanwhile, any offense RVD mounted was revered. While Cena relied on strength-based moves like powerslams and clotheslines, RVD focused on faster-paced maneuvers like spin kicks and moonsaults. The fans in the Hammerstein Ballroom were insatiable; only an RVD title victory would quell their hunger.

RVD started to gain the advantage, hitting a Van Terminator with a steel chair for a two-count. However, Cena soon shifted the match in his favor. He even used the same chair to his advantage to keep “The Whole Dam Show” on the defensive. All the while, the ECW diehards directed their vitriolic chants at the WWE Champion. RVD fought out of an FU, later to be known as the Attitude Adjustment, only to be caught by a powerbomb from Cena. Despite this, RVD fought on, the Hammerstein Ballroom attendees in his corner all the while.

Later in the match, RVD set up a table in the corner. Cena caught RVD with the STFU, a modified version of the STF; this technique would become a mainstay in “The Champ’s” repertoire. RVD made it to the ropes, but despite this, Cena refused to break the hold. This prompted John Finnegan, the ECW official, to forcefully break the hold. After a brief exchange with Finnegan, Cena dropped the referee with a clothesline. Later in the match, Nick Patrick, a SmackDown official that previously worked for WCW, took over officiating duties. Regardless, no official could truly maintain order in this chaotic main event.

How RVD vs. Cena Ended

The match approached its climax when Cena dumped RVD to the outside. Afterward, a figure wearing a black leather jacket and motorcycle helmet rushed to the ring. Said figure speared Cena through the aforementioned table before laying out Nick Patrick. Removing his helmet, the figure revealed himself as Edge; earlier in the night, alongside Lita and Mick Foley, Edge defeated Tommy Dreamer, Beulah McGillicutty, and Terry Funk in an intergender Extreme Rules Match. Despite the fact that Edge received a negative response in his own match, in his brief yet meaningful main event involvement, he was perhaps as beloved as RVD. Loud “Thank You Edge” chants made this evident.

Seeing an unconscious Cena in the ring, RVD made his way to the top, hitting the Five Star Frog Splash. The challenger made the cover, though there was no official to make the count. RVD attempted to revive Patrick, though to no avail. Suddenly, former ECW promoter Paul Heyman rushed to the ring, ordering RVD to make the cover. Heyman’s hand hit the mat three times to a raucous reaction from the Hammerstein Ballroom. Ring announcer Stephen DeAngelis made the proclamation: Rob Van Dam was the new ECW, or WWE, Champion. What followed was a sense of euphoria from the ECW wrestlers and fans, rallying around the man that dethroned Cena. Finally, after years of hard work, “Mr. Monday Night” was “Mr. World Champion.”

Given the controversial ending of the ECW One Night Stand 2006 main event, fans wondered if the result would stand. The following night, on Monday Night Raw, Paul Heyman made an announcement. Per Vince McMahon‘s decision, Rob Van Dan’s WWE Championship victory was official. The night after, on the debut episode of WWE ECW, Heyman presented RVD with the old-school ECW World Heavyweight Championship. RVD showed great respect toward the title, seeing it as a great honor in his career. Nonetheless, RVD elected to keep the WWE Championship as well, jokingly commenting, “it spins.” In another history-making moment, RVD became the first, and only, wrestler to hold the WWE and ECW World Heavyweight Titles simultaneously.

RVD’s reign at the top of the WWE mountain would be short-lived. Less than a month following his career-defining moment at ECW One Night Stand 2006, he would lose the WWE Championship in July. RVD lost the title, on Raw, to Edge in a triple threat match also involving Cena. The following night, on WWE ECW, RVD lost the ECW World Heavyweight Championship to The Big Show. These title losses were followed by WWE announcing RVD’s 30-day suspension. Though he would return to WWE programming, specifically ECW, the following August, he would win neither world title again.

As for WWE’s revival of ECW, one may describe it as missed potential. Many fans criticized WWE’s handling of the brand, from a TV standpoint, believing it to be too similar to WWE’s mainstream programming. Furthermore, characters such as Kevin Thorn and The Zombie deviated from the gritty, hard-hitting reputation ECW had built over the years. Despite this, the first two ECW One Night Stand events remain among the most beloved pay-per-views of the era. Rob Van Dam’s WWE Championship win in 2006 was the feel-good moment from this revival that lives on in the hearts and minds of fans.