After over a year of waiting due to COVID-19, we are finally ready to celebrate the anniversary of GAEA Japan with GAEAISM!  GAEA Japan closed its doors in 2005 after just 10 years in operation, in those 10 years it became arguably the biggest Joshi promotion in the world, taking over the mantel from All Japan Women’s Pro Wrestling when it fell on hard times.  To celebrate the 25th anniversary of the promotion opening Chigusa Nagayo and Meiko Satomura aimed to run GAEAISM, a cross-promotional show featuring Marvelous and Sendai Girls talent as well as other GAEA alumni that are still active.  This show has been delayed twice already due to COVID-19 but on June 13 we finally celebrate GAEA Japan with a huge show that sees the future of the Sendai Girls and AAAW titles decided in the main event.  Without further ado let’s take a look at the card for GAEAISM.

The young talents of Marvelous and Sendai Girls will do battle here.  Marvelous are credited within Joshi circles for their constant output of incredibly talented trainees and this match is a showcase of the distance between the two groups at the moment, although the Sendai trainees are much newer aside.  Yurika Oka has received some significant build-up in previous cross-promotional matches and we expect her protected submission finish to get her team the upset win here.

Leo Isaka, the only male roster member of the Marvelous roster takes on CIMA in singles action.  CIMA, currently representing GLEAT is a well-known veteran who is mostly known for his run in Dragon Gate but has continued to excel since leaving the promotion, he even currently holds the All Japan Jr. Heavyweight title.  Leo Isaka has his work cut out for him against the veteran.

GAEAISM The Resurrection – “Regina” Sakura Hirota vs The Great Sasuke

One of GAEA Japan’s greatest exports is comedic genius Sakura Hirota and in this match, she will take on The Great Sasuke in one of the weirdest matches we’ve ever seen.  You may be wondering why Sasuke is on this show, well back in the early days of GAEA Sasuke’s Michinoku Pro Wrestling would feature GAEA offer matches on their cards, to help the women’s promotion possibly win some new fans, as had happened to AJW when they worked with Universal Lucha Libre.  This match is a nice nod to GAEA Japan’s history and is sure to be entertaining in many ways.

Hibiki has spent the past few months being a disrespectful loudmouth who has gotten under the skin of just about everyone.  For whatever reason, Hibiki seemed to direct her ire at the “hardcore queen” DASH Chisako and the two will now meet in a hardcore match, which shockingly plays to Chisako’s strengths.  Hibiki has done such a good job of playing her heel character that we hope Chisako takes her to the cleaners here.

For any Joshi nerd, this match is star-studded as it has two of the bigger names in Joshi history as well as talents like KAORU and Chikayo Nagashima who are among the most underrated Joshi wrestlers of all time.   It’s great to see some names from the original GAEA Japan still active and ready to take part in a match celebrating the promotion. 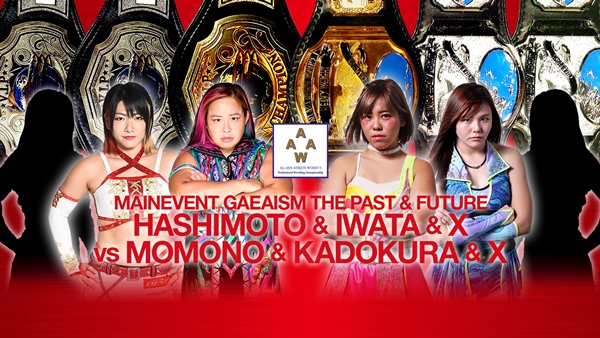 This is an elimination match that will decide the future of the Sendai Girls world and tag championships as well as the re-commissioned AAAW world and tag championships (The titles used in GAEA).   The main source of intrigue comes with the two surprise participants in the match, for Sendai Girls, it’s almost a lock that it will be Yurika Oka. For Marvelous, many are convinced it may be Marvelous’ ace Takumi Iroha making her return from injury.  Although each promotion could instead pick from the older names on each roster with KAORU and Tomoko Watanabe possibly representing Marvelous and Satomura making one last stand with her Sendai Girls.

As for the future of the championships, it seems like a lock that Marvelous will win and claim ownership of the four titles and would likely unify them.  Sendai Girls has steadily cared less and less about its championships over the years to the point that Hashimoto has been world champion in Sendai for 604 days now with only one defense to her name.  The titles will get more use in Marvelous and help add some structure to their cards going forward.

It remains to be seen how Sendai Girls would respond to losing the ownership of their titles, some have speculated that the group could merge with Marvelous, and as great as that would be for all the performers involved we don’t think that’s happening just yet.

Whatever happens, this show is sure to deliver some fun matches and allows Nagayo to celebrate her once-great creation GAEA Japan after a year of waiting, it also serves as one of the final Meiko Satomura appearances in Japan before she moves to the UK full time.  Make sure you don’t miss the show!

Stay tuned to the Last Word on Pro Wrestling for more on this and other stories from around the world of wrestling as they develop. You can always count on LWOPW to be on top of the major news in the wrestling world, as well as to provide you with analysis, previews, videos, interviews, and editorials on the wrestling world. GAEAISM will air live on PPV on Zaiko.  If you’d like to see what GAEA Japan was all about check out their YouTube channel which is filled with uploads of classic matches from the group’s history.