Japanese pro wrestling has had hundreds of stars in their native Japan, but outside of a smaller international audience, only a handful have their legacy passed down in such a respectful manner that generations later still hold them with respect, even when the wrestler is well past their prime. NJPW legend and 2x IWGP Heavyweight Champion Yuji Nagata (aged 53) just made his U.S. return in over 30 years to AEW and most fans had very few issues with the hard-hitting veteran still competing at his age. Retired legends like Kenta Kobashi and Mitsuharu Misawa are arguably more widely known by younger generations over Antonio Inoki and Giant Baba, not to mention Rikidozan. Jushin Thunder Liger was still a main event attraction when he retired in 2020 at the age of 55. And on Thursday night, IMPACT Wrestling revealed that another former 2x IWGP Heavyweight Champion (aged 50) Satoshi Kojima was heading to North America for his first time outside of an NJPW/Ring of Honor promotion since his 2014 run as NWA Worlds Heavyweight Champion. In the early 2000s, Kojima was one of the first Major League Wrestling (MLW) world champions. But there’s one living legend of Japanese puroresu who still has one trophy left to secure before this 52-year old retires. The “Warlord King” of Suzuki-gun, Minoru Suzuki. And with the recent announcement of the IWGP World Championship being vacated due to injury to Will Ospreay, now may be just the time.

Rumors of Suzuki’s impending departure from New Japan over the past two years have been sporadic, but while nothing of substance has materialized in real-time, it would be naive to think that Suzuki will remain as part of the company much longer. While NJPW would most definitely love to retain Suzuki for the remainder of his career, the truth is, he would eventually become background noise, the one small run a year with lots of multi-man tag team matches that have kept Kojima, Nagata, and Hiroyoshi Tenzan still in the fold. While still pushed as credible veterans, their glory days are well behind them. Even Hiroshi Tanahashi seems to have been handed one short ceremonial final eighth IWGP heavyweight title belt as a parting gift as one of the 1-2 punch of main event superstars. While he is still a ringer who can work the main event matches with anyone, it seemed that Tanahashi would now be used more as the “Final Boss” one has to defeat to face the world champion. And that’s all rightfully so, but New Japan has an exciting young crop of stars who are in their prime who need to command more of the attention – names like Kazuchika Okada, Tetsuya Naito, SANADA, Will Ospreay, Jay White, etc. But not only could Minoru Suzuki scratch off the IWGP Championship from his list, but his reign could help launch the next leader of New Japan. 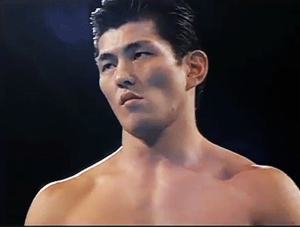 Minoru Suzuki began his pro wrestling career in the NJPW Dojo as a Young Lion in 1988 but in 1990 left with Yoshiaki Fujiwara for the latter’s new Universal Wrestling Federation (UWF). He remained loyal to Fujiwara until 1993, when he left to help found Pancrase, one of the first MMA promotions in the world, with Masakatsu Funaki and Ken Shamrock. He spent the next decade working MMA before returning to puroresu in 2003, where he began as a freelancer, leaving MMA with a 30-19 record in 49 matches (22 wins by submission). In his travels, he won IWGP tag team gold in NJPW with Yoshihiro Takayama and the GHC Tag Team Championship in Pro Wrestling NOAH with Noamichi Marufuji. In 2006, he joined All Japan Pro Wrestling (AJPW), the rival of NJPW, and that September he defeated Taiyo Kea to win the AJPW Triple Crown for his first singles championship, which he held an astounding 357-days – he even defended it at the first NJPW Wrestle Kingdom against Nagata in 2007. He became a force in All Japan, capturing both the All Asia tag titles and AJPW World Tag Team Championship, and in May of 2010, won his second Triple Crown Championship. In only seven years back as a pro wrestler, Suzuki had become one of Japan’s top players. In August of 2010, he lost the Triple Crown to one of All-Japan’s rising stars, Suwama, and he left All Japan later that year and made his return to New Japan.

Initially, his return to New Japan was to attack longtime rival (and former amateur wrestling partner) Yuji Nagata, but in the spring of 2011, Suzuki initiated a hostile takeover of Kojima-gun, the faction led by Satoshi Kojima. Rebranded as Suzuki-gun, he took hold of the stable and turned them into a pack of savage dogs, hell-bent on destroying New Japan. That fall, Suzuki and Lance Archer won the NJPW G1 Tag League (now called World Tag League). But despite their daunting presence in New Japan causing chaos where they went, Suzuki was unable to acquire gold the way he had in AJPW. So in 2015, he took the entire Suzuki-gun stable to invade Pro Wrestling NOAH, where they ran roughshod over the rival promotion. In March, Suzuki defeated his old tag partner Marufuji to win the GHC Heavyweight Championship, reigning atop NOAH for 283-days, while Suzuki-gun’s Killer Elite Squad (Lance Archer & Davey Boy Smith Jr.) became 2x GHC tag team champions, El Desperado & TAKA Michinoku won GHC Junior Heavyweight Tag Team titles and Taichi captured the GHC Junior Heavyweight Championship. Suzuki-gun had conquered NOAH. So in the spring of 2017, they all returned to New Japan with a new taste for blood.

Over the past four years since their return to New Japan, Suzuki-gun has managed to still be relevant. Suzuki himself is a 2x NEVER Openweight Champion, IWGP Intercontinental Champion, and won gold in New Japan’s British ally, Revolution Pro, where he’s a former RevPro Undisputed British Heavyweight Champion and RevPro Undisputed British Tag Team Champion with Zack Sabre Jr. But while he has had shots at the IWGP heavyweight title, he’s always fallen short. Amidst the rise of Kazuchika Okada, Tetsuya Naito and Kenny Omega, Suzuki was always more of an obstacle for them instead of a proper threat. But now, with the IWGP World Championship vacant, there is perhaps no better time to finally crown the Murder King of New Japan, who has already won the top prizes in both AJPW and NOAH.

Many pundits are assuming that Tanahashi is the natural heir to “hold” the title until New Japan can get back into their preferred angle with Will Ospreay, but with eight titles under his belt already, Tanahashi’s ninth reign would do nothing more to add to a legacy that is already otherworldly. And yes, we’ve talked about many other stars who could take the mantle and run with it in Ospreay’s absence, and all for good reasons. But Minoru Suzuki is one of the last of New Japan’s 50+ year old veterans who still has a global mystique as a twisted, pain-inducing bad-ass and who attracts challengers both young and old. He appeared at two of Game Changer Wrestling’s (GCW) Bloodsport events, first defeating Matt Riddle at the inaugural one in 2018 and fighting former UFC Heavyweight Champion Josh Barnett to a time-limit draw at the second in 2019.

While there is still a lot New Japan could do with Suzuki in the coming years, it almost seems more logical for Minoru Suzuki to become a freelancer once again. Much like how he took over Kojima-gun from Satoshi Kojima, Suzuki-gun could very well end up in a similar situation, with either Zack Sabre Jr. or Taichi finally taking out their leader to form Sabre-gun or Taichi-gun in true Sith fashion. And there really isn’t a moment that Tanahashi could have in an interim reign as IWGP Champion that would create a moment as big as IWGP World Champion Minoru Suzuki being toppled when finally at the top of the food chain in New Japan – either defeated by one of his proteges for the title or their turn causing his loss to another younger New Japan star. And even if the reign itself was short, it would finally give Suzuki the final act of validation he needs to become the Triad boss of Japanese puroresu – New Japan’s top title to go alongside his Triple Crowns and GHC heavyweight belt. And then, God have mercy, the rest of the world can just sit back and watch the planet burn.